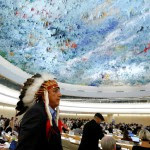 A few weeks ago I wrote an article about the cultural tragedy and potential environmental disaster which was unfolding in North Dakota involving the small and poor Standing Rock Sioux tribe and the Energy Transfer oil pipeline passing adjacent to their reservation which could have a negative impact on not just local wildlife and domestic herds of cattle, but on the local water supply and its source, the Missouri River, not to mention that some of the land brought under construction includes sacred burial grounds. Unfortunately for all concerned, things haven't improved.

Since my last article, well over 200 protestors have been arrested for blocking access across Highway 1806, the key highway used by construction personnel building the pipeline. Members of over 500 tribes from across the US and Canada have shown their support, along with dozens of non-Native Americans from across America and Europe. The land where the pipeline is being constructed is federal land and managed by the Army Corp of Engineers, which had been awarded to the Lakota and Dakota tribes in 1851. It was subsequently taken back years later by federal government. Nevertheless, local tribes still regard the land as theirs since it's home to sacred burial sites and is currently used for grazing by domestic herds, wild bison, and other wildlife that Native Americans either hunt or cultivate.

Efforts by the Standing Rock tribe to delay or defeat the construction of the 1,172 mile pipe through the federal court system has met with little success, which has sided with the oil and gas conglomerate, leaving the resource strapped tribe with little choice but to try and block the advancement of the crude oil pipeline in the hopes the public pressure will result in rerouting the pipeline away from farm and pasture lands, and especially away the water supply which is critical to the entire ecosystem. The CEO of the Texas based Energy Transfer Partners Ltd, Kelcy Warren, has publically stated that the company has no intention of deviating from its current plans, which is estimated to cost approximately $3.76 billion dollars. The pipeline, which is called the "Dakota Access Pipeline" or DAPL, will run from the Bakken oil field near Three Forks North Dakota through South Dakota and Iowa to Patoka, Illinois, will generate almost 600,000 barrels of oil, which is considered to be only half of its production capacity. Energy Transfer Partners is the owner of Sunoco Limited Parters and Sunoco Logistics Limited Partners.

According to Cass County Sheriff Paul Laney, who has been overseeing the response from law enforcement, which has included dozens of federal marshals and sheriff deputies, the protests are "more like riots" with the protestors allegedly attempting to destroy or disable private property (construction equipment) as well as harass and threaten pipeline workers. North Dakota Governor Jack Dalrymple ordered in the National Guard. As late as Thursday, October 27th, seven school buses full of law enforcement officers from North Dakota and other states were brought in to aid existing law enforcement. As a result, protestors have faced officers in riot gear, complete with body armor, riot shields, tear gas, helicopters, and armored personnel carriers, making the scene look more like a military operation than a police presence.

Personally, I have an serious issue with this situation. First, the Standing Rock tribal elders were never included in the discussion of the pipeline proposal, which they should have been as the Army Corps of Engineers has acknowledged. Secondly, Energy Transfer Partners does have a history of leaks and spillages, thus the concern for the integrity of the wildlife, as well as human life, is a genuine concern. A single spillage in the local supply such as the Cannonball River which is near where the protests are taking place, not to mention the Missouri River, would have catastrophic results (the pipeline will cross twice underneath the Missouri River). Finally, the treatment of First Nation tribes as if their opinions or unique interests count for nothing is not just highly insensitive but, frankly, belongs to a long past century of misdeeds and abuse bordering on genocide by the federal government which is just as inexcusable now as it was then. What we seem to be witnessing now---with little corporate media coverage thus far I might add---is the naked display of money and influence over the wellbeing of a land or a People. This is profit at all costs and lives, not to mention Native American culture, be damned. 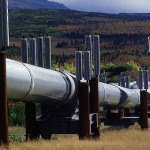 The end result may be that, eventually, the protestors will wear out and be forced to go back to their daily lives of trying to eke out a living as they have done for generations while supporters leave and return to resume their lives as well. The pipeline will move forward and the company and its stockholders will make a tidy profit off their investment. However, the name of Energy Transfer Partners Ltd. will become as tainted as the ground where their oil spills have occurred. With or without more media coverage, word will spread, and with it the reputation of a oil and gas conglomerate who backhanded a small and poor Native American tribe which was just trying to protect itself from environmental oblivion.

Energy Transfer Partners can't deny that it has a history of oil spills, some with devastating results to the native wildlife and local environment and regulatory noncompliance (see cites listed below for details). In fact, it was hit with a $100,000 fine on this project alone for failure to provide adequate independent construction oversight by the North Dakota Public Service Commission on top of a special $100,000 permit fee to cover any potential damages or legal fees. It can't deny that the Standing Rock tribe can ill afford an corporate "oops" and promise of a cleanup. I think history will show that Energy Transfer may win this battle, but it will lose the war with public opinion, and that will impact its bottom line, which is the ultimate price.


The company behind the embattled North Dakota pipeline isn't giving up so easy
http://www.businessinsider.com/r-energy-transfer-committed-to-building-north-dakota-pipeline-letter-2016-9