Campaigning On The Public's Dollar

Did you know that the cost to fly Air Force One is just over $228,000...an hour? That covers fuel (they carry their own extra fuel), food, water, supplies, and crew. Plus, the engines are inspected while on the ground and after each mission the engines are overhauled while Air Force One itself gets a nose to tail and wingtip to wingtip inspection. Can you guess how much it costs to fly the President of the United States around? Well, the 2012/2013 Christmas flight to Hawaii and back to Washington cost US taxpayers $4,086,355.20. A trip to Ireland in July of 2013, which included a sightseeing tour for Mrs. Obama, their daughters, and usual entourage cost taxpayers just under $8 million dollars. When they all decided to take a break and fly to Africa the same year, our tab was over $15 million dollars, and we didn't even get a lousy T-shirt! But, of course, that trip included US fighter escorts because we all know just how popular the American President is globally. In August of 2013, the cost for the Obama's to fly to Martha Vineyard for their August vacation and back to Washington was a little over $1,164,000---and that doesn't include lodging, food, or even souvenirs.

In fact, flying the President of the United States around is an expensive operation...a very expensive operation since the President travels with a battery of special armored plated vehicles, a small army of Secret Service personnel and advance security agents to scope out and secure the areas where he will be traveling, speaking or staying. Overnight stays requires that the White House chef must go along to prepare his food (often, they also bring food from the White House kitchen in order to insure it hasn't been "tainted" in any way. This goes for beverages as well) as well as doctors and surgical equipment (complete with blood supply matching the President, his family, and key personnel), speech writers, military personnel, office staff and equipment such as teleprompters, microphones, speakers, podium with the Presidential Seal, and much more.

On long trips, the total number of people travelling with the President (in accompanying airplanes of course) may be as high as 500. On shorter trips or "sorties", the number may be only a hundred or so. So, any trip by the President or even the Vice President, will cost taxpayers one million dollars minimum every time the wheels leave the ground (for short "day trips", the President may opt to use "Marine One", which flown by Marine Helicopter Squadron 1 or HMX-1 at a cost of approximately $2760 an hour. When caring the President, they usually fly with 3 to 5 diversionary helicopters. . The squadron is comprised of VH-3D and VH-60N "Whitehawk" helicopters). In fact, travelling with the President can cost as much at $200 million per day when you factor in the backup C-747, multiple C-17 cargo planes which carries all the goodies such as armored vehicles, the President's limo and the President's helicopter, not to mention security assets which can include fighter support and naval assets when travelling overseas. The Vice President travels in his own special plane with back up security at just slightly less cost. 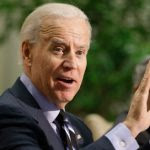 My point in bringing this to your attention is this. Have you noticed the number of times that President Obama or Vice President Joe Biden has been out on the campaign trail stumping for Hillary Clinton? Well, the answer is about seven times for Obama and around five times for Biden. That's not an inordinate number of times I suppose, but when you consider that this amounts to 14 trips (seven out and seven back) and ten for Biden (five out and five back) at $228,000 an hour each time Air Force One goes wheels up plus security and so forth, we're looking at $1 million+ 14 times (24 times if you add in Biden). Now, I have a couple of issues with this. First, the President of the United States (as well as the Vice President) is suppose to represent the People of America.

The President should be above petty partisan politics. Secondly, according to the US General Accounting Office (GAO), the President, Vice President and/or their family, when using Air Force One for private, personal, or political purposes, is to reimburse the White House budget for the complete cost at the current commercial rates. For instance, if the President is using Air Force One for a holiday, he is to reimburse the White House budget at the same rate as a commercial plane ticket (I assume first class, but it could be business class just as easily), along with the costs for any family or friends. The President and his guests are responsible for their food, lodging, etc (I imagine someone else, like lobbyist or deep pocket donor, picks up the tab). Of course, the President's food as well as his family's and presumably that of any personal guests are to be purchased by, inspected, and prepared by the White House chef regardless of where the meal takes place. Therefore, we have to presume that the food and lodgings the GAO is discussing would be that acquired away from Air Force One.

Anything of a personal nature, such as hairdresser, clothes, and so forth, are paid for separately or from the White House personal budget, of course much of the jewelry and clothes are often donated. The GAO summary goes on to state that all other costs pertaining to Air Force One is picked up by the Air Force (and, thus, by taxpayers) regardless of the nature of the flight. Secondly, since this is the President after all, all security and support details accompanying the President and/or his family are charged to the White House budget. As for the guests, I'm sure that incidentals are paid for individually. I doubt that you get a bill for sleeping accommodations or meals onboard Air Force One. So, basically you're responsible for your own hotel rooms and private meals (naturally, I seriously doubt anyone travelling with the President or his family is worried about the cost of a room or meal).

So, while the President, who is supposed to represent all of us, is MIA from the White House and doing what we elected and paying him to do, is out campaigning in a partisan election on our dollar, and I think that's wrong. Now, don't get me wrong and assume I'm picking just on Obama. I'm not. This has been a practice of presidents of both political parties for decades now, and regardless of whom, I still thinks it's wrong and a violation of the public's trust. We elect an individual to do a job---a very tough job. Ok, I get that, and I have no doubt they need a break to get away from the stress and smell of Washington politics, and even then, they're not entirely removed from it---they're on 24/7/365 but they knew that when they campaigned for the job so they can't claim they didn't what they were getting into. I do have an issue with excessive breaks (for instance, more than two 10 day vacations a year) and at that, when the vacation is going to costs taxpayers some outrageous amount.

When the President, however, takes off from doing what we're paying him to do in order to get involved in some partisan political race, he isn't doing his job and he's obviously not representing the People. He's representing a political party which means that at least 2/3 of the public aren't being represented while he's out working on behalf of some candidate (for example, Obama is a Democrat yet 43% of Americans are Independents and around 27% are Republicans, so while he's campaigning for another Democrat, there is a majority of citizens not being looked after). I have no doubt this happens at the State level with governors, Senate President's and House Speakers, with the latter two being part time jobs, so they may not be on the public's dollar while the governor is a full time job. Thus, he or she would have access to the State's aircraft or helicopter and while the costs to taxpayers would be substantially less, the same principal applies.

To me, this is a misuse of public funds and of the public's trust. Of course, I also happen to believe that once you're elected to office, you are no longer a Democrat or Republican or whatever. You're a public servant, and the public is who you represent. You don't represent any political party or belong to any special permanent committees exclusively based on gender, race, political party, or even a religion. Your membership in these special interest committees says these groups deserve more attention than others; they are somehow more important than other groups. In this country, every group is interconnected to others. What affects one group affects other groups. Maybe not to the same degree, but it affects all nevertheless. You can't try to solve a problem for one and not all. Each individual elected to office is there to represent every citizen in their district or State equally. Let's stop with this built-in partisanship paid for at the public's expense.


It's ridiculously expense to fly Air Force One
http://www.businessinsider.com/price-to-fly-on-air-force-one-2015-2