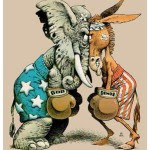 Five states have primary elections on May 17th. A few have already had theirs while others are yet to come. Primaries are notorious for having low turnouts, which is a shame. They determine our choices in general election. Primaries offer us the best opportunity to decide who we want to represent us verses who the party wants to represent them.

Did you know that out of the 30 most populous cities in the US, most are non-partisan? We're talking about cities like Los Angeles,  Chicago,  San Francisco, Jacksonville Florida, Boston Massachusetts, Seattle and Portland Washington, Nashville Tennessee, and most of the cities in Texas. In fact, of the top 30, only seven are partisan. The most notable of which is New York City. So too is Louisville Kentucky.

However, it may surprise you to know that not all of Kentucky's elections are partisan. In fact, according to the Kentucky League of Cities, of Kentucky's 416 cities, only seven hold partisan elections, including Louisville, which is the state's largest city, economic engine, and one of the few remaining Democrat stronghold.

Lexington, Kentucky's second largest city with a population of just over 322,000, is governed by a 12 member non-partisan metro council and mayor while Louisville, with a population of just under 619,000, has an oversized 26 member metro council and mayoral office dominated by Democrats (the last Republican mayor was elected in 1965). Most of the city's political clout tilted toward the predominately black and Democrat West End and the largely white and well-to-do Republican East End with the mixed middle, especially in the southwest part of the county, largely underrepresented.

Judicial races are officially non-partisan, although political persuasion does creep in and while judicial candidates are prohibited from openly divulging their political affiliation, it's generally obvious when you listen to their answers to questions or notice what meetings they attend (a review of their campaign finances is another good clue). However, several states are experimenting with the notion to allow judicial races to be partisan (or at least, allow judicial candidates to reveal their party affiliation).

The reason cited is that it would allow voters to choose judges who are more closely aligned with their political, social, and moral ideology. Opponents, however, cite this as being dangerous as it would create a more biased bench and would impact the ability to receive a fair hearing. Rather than cases being heard and decided on the merits of the case, decisions from the bench could be based on ideological leanings.

It's kind of like the media (especially newspapers) which are suppose to be non-biased and report just the facts, their political bias is often laid bare for all to see, if not in the slant of their articles, then definitely in their so-called endorsements which are aimed at influencing the electorate if not outright manipulating the vote.

Nevertheless, I think judicial races should be non-partisan and impartial whenever and as much as possible. People need to know they are getting a fair and honest hearing. It's bad enough that we have a two tier legal system, one for the ruling elites and one for the rest of us, without worrying that the judge sitting before us is already biased toward me for some position me or my attorney might hold.

Along the same lines, certain elected or even appointed political positions should be the non-partisan too. For instance, The Secretary of State, which is in charge of elections in most states should be non-partisan. It doesn't create or set policy. It merely enforces existing policy set forth by the state legislature and the governor. There is no reason that the office of Secretary of State should be encumbered with the usual partisan biases when it's suppose to represent all registered voters.

While not elected, often the Board of Elections is appointed based on political party. While they don't make laws, they are there to ensure elections are as fair and honest as possible. However, typically only Democrats and Republicans are represented, which is in itself inherently biased and unfair. 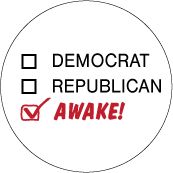 Not everyone is a Democrat or Republican. In fact, nationally, the majority of registered voters are Independent (Independents also make up majority of registered voters in 11 states). Typically Independents and third party members are lumped into which of the two corporate parties are the smallest and ignored. That's not right. They should have their own appointed board representatives.

While we're on the topic, in many states, Independents and third parties are required to jump through an inordinate number of hoops just to get on the ballot. If the Democrat or Republican needs three signatures to file for an office, an Independent or third party candidate may have to have 50. Not only is that wrong, it's possibly illegal.

And another thing. Primaries. Did you know that primaries for the two corporate parties are paid for by you---the taxpayer? Well, they are. However, if you're a Independent you are prevented from voting in most states despite the face you still have to pay for the primary. That's known as a "closed primary" (Kentucky and eight other states have a closed primary).That's taxation without representation and that's wrong.

In the 30 states with open or semi open primaries, Independent and non-party registered voters can choose which of the two primaries they can vote in. Both parties, of course, want to prohibit open primaries as much as possible because, if allowed, more voters will leave either party and, who knows, voters may ultimately demand that the two parties pay for their own primaries!

In addition to the Secretary of State's office, the same holds true for the city or county clerk's office. They typically oversee vehicle licenses and registrations, marriage licenses, deed records, and voter registration. Why should this office be partisan?  The same goes for Circuit Court Clerk, which should be totally impartial, and thus non-partisan.

The Property Evaluation Administrator is another one of those offices which don't set policy. They assess property---commercial, personal, and vehicle--- for tax purposes. They don't establish law. They just follow existing laws as laid out by the state legislature, and there's not a reason in the world it should be partisan.

In some jurisdictions nationwide, county commissioners and school board members are partisan. Why is that? They merely enforce what has already been laid out for them by the state legislature or municipal government (such as the city aldermen or state assembly).

Personally, I believe that anyone elected to office should be required to take an oath to represent all their constituents. In our "winner-take-all" political system, only those who belong to the winning party are represented, be it for two, four, or six years. I should clarify that only the corporate clique behind the winning party's candidate are actually represented.

You, the voter, are only along for the ride for which you may or may not received some benefit. Those on the losing side are not represented by anyone. Therefore, by renouncing their partisan allegiance, the winning candidates has an obligation to serve everyone.

There are things we can do to restore the Republic as well as our state and local governments. Moving beyond partisan bickering and corporate control is key. We need to ensure that every voter is equally represented. That means passing laws which ensure level playing fields for everyone with no one party or candidate having an advantage over the other.

It means de-politicalization of certain offices which don't make laws. It also means winning candidates resigning from their party and taking an oath to represent everyone regardless of their registration.

Of course, there are other things we can do such as eliminate partisan gerrymandering which seeks to allow parties to pick their voters instead of voters picking their candidates. We can adopt rank choice voting which would eliminate the need for partisan primaries by ranking candidates by preference with the top ranked candidate winning (party isn't shown). In the case of a tie, there would simply be a run off the same way. It would also go a long way to ending rigged elections.

We can demand term limits, referendums and voter initiatives. Of course, one of the most important things we can do is insist that Congress introduce legislation to void Citizens United, which was one of the worst decisions ever made by the Supreme Court (and it goes to show how those with lifetime appointments or unlimited terms are so out of touch with reality).

Citizens United declared that corporations are defacto "people", with greater rights than you or me. The Supreme Court equated money with free speech, except that corporations are free to voice as much "speech" as they like while common citizens remain capped (not like we could match the millions they donate anyway).

Citizens United effectively removed citizens from the election process. It has contributed to putting the cost of running for office beyond the means of the average citizen so that only the wealthy can afford to run for office.  It ensured that we are ruled---not governed---by a permanent political class that has nothing in common with the average working class man or woman. Citizens United was the catalyst which transformed our Republic into their Corporatocracy, managed by an elite oligarchy which has no obligation to you or me.

None of these suggestions are impossible. Not a single one is beyond our ability to achieve. But it won't happen on its own. The ruling elites and their corporate backers will do whatever they must to keep and expand their control. They've made that abundantly clear. But if we join together, we are unbeatable.