Ceasefire in Syria: Buying Time for the Kurds and the Region

There's a tenuous truce right now between Syrian, Kurdish, and invading Turkish troops. The truce and ceasefire went into effect on October 17, just days after US forces withdrew from the northern region of Syria, separating Kurdish forces and Turks massing on their eastern border. The ceasefire agreement came as a result of---or perhaps despite of---a October 9th letter sent to Turkey's President, Recep Tayyip Erodogan, and President Donald Trump in which he urged the Turkish President not to be a "tough guy" or a "fool".

President Trump went on to say that the U.S. could and would use economic sanctions to disrupt the Turkish economy, and closed with a promise to follow up with a phone call. Allegedly the Turkish president wadded up the letter and threw it into the trashcan. The letter was written the same day Turkish forces began crossing into northern Syria. Whether or not the letter was taken seriously or should have been worded more diplomatically, it appears to have had the desired result.

The Kurds, who were instrumental in the defeat of not just ISIS, but also in the downfall of Saddam Hussein, have had a long standing feud with the Turks, primarily over the issue of sovereignty. Part of the land occupied by the Kurdish people over the last 5000 years or so, includes eastern portions of Turkey, as well as part of northern Syria, northern Iraq, and western Iran.

Following the end of World War I and the collapse of the Ottoman Empire, the Kurdish people had been promised a independent homeland by the victorious allies (principally France and England who acquired the lion's share of the Middle East). However, just a few years later, that promise was broken and the Kurdish people were divided up between four newly created countries---Iran, Iraq, Syria, and Turkey---with a semi-autonomous territory called Kurdistan created in northern Iraq.

Meanwhile, the Kurds were subjected to purges and genocide. Turkey even refused to acknowledge the Kurds on the eastern border, referring to them as "Mountain Turks" instead, along with attempts to suppress their language and culture. In Iraq, Saddam Hussein wage a catastrophic war on the Kurds, including the use of nerve and saran gas attacks. Things weren't much better in Iran or Syria.

So why the invasion? An interesting question to be sure. Partly because a measure of stability has been re-established in the region with the defeat of ISIS. In addition, Syria, a long standing major Russian ally, is much more weakened militarily and economically because of its recent civil war with factions within the country (the U.S. was also looking at not just weakening Syria, but in toppling its president, Bashar el-Assad, in hopefully of a more pro-American government, which would deprive Moscow of a key ally in the region). In addition, it would allow the US an opportunity to put surveillance and perhaps ground forces close to Syria's border with Washington's archenemy, Iran. Perhaps this would give the Turks an opportunity to seize territory in northern Syria, as well as to get rid of the newly embolden Kurdish fighters and put an end to the idea of a independent homeland for the Kurdish people once and for all.

Another key factor is that the semi-autonomous province of Kurdistan sits on approximately 1/3 of Iraq's oil and gas reserves. Nothing in geopolitics gets more attention than the control and flow of oil and gas, which was a key factor in removing former ally, Saddam Hussein, who got a little too big for his britches with the invasion of Kuwait and it's oil production (as well as proximity to the Persian Gulf and their regional enemy, Saudi Arabia). Meanwhile, in Iran, the Kurds have been engaged in a "hot and cold" with whoever was in charge, for a independent homeland, especially since 1918. Since 2014, the intensity has increased to a much more "hot" insurgent war. Since 1946, there has been approximately 28,000 fighters killed, while from 1980 to 2000, around 30,000 civilians have died with no signs of easing hostilities.

President Erdogan alerted Trump on October 6th of his intentions to invade and requested that U.S. troops in the area be evacuated. Trump agreed, and the small detachment of soldiers and equipment were moved further south. What prompted Trump to do so, knowing full well that our Kurdish allies would likely be annihilated is unknown. At first there was a quip about the Kurds not "helping" us in World War II. I don't know if he was serious or not, but no one was smiling. The Pentagon and members of Congress on both sides of the aisle were quick to criticize Trump's decision. In the eyes of the world, especially the Middle East which places a very high value on trust and loyalty, this didn't go down well.

Now President Trump is trying to force the Turks back out of Syria and minimize any damage to the Kurds. However, damage has already taken place. Kurdish troops guarding captured ISIS prisoners have been forced to flee the area, leaving the battle-harden ISIS fighters (in at least one case, around 1000 ISIS prisoners were able to escape thanks to the Turkish backed Free Syrian Army). 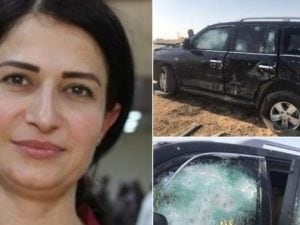 In addition, a key Kurdish politician and women's right advocate, Hevrin Khalaf, along with eight others, were ambushed and murdered by Turkish supported rebels who oppose Syria's President Assad. Hevrin was secretary-general of the Future Free Syria Party and a key diplomatic figure in trying to find a peaceful settlement to the situation in Syria and the region. Thus far, approximately 38 civilians have been killed since the October 9th invasion began.

Trump's blunder is serious. It has damaged our image in the eyes of not just our friends and allies, but has also provided a strategic opening for our enemies. They will use this opportunity to show that the United States isn't to be trusted; that it's better to deal with them than an American government whose support ebbs and flows based on its current needs. It will be surprising if North Korea's Kim Jong-Il, Russia's Vladimir Putin, or China's Xi Jinping don't make use of this error in judgment.

Another factor is that while Erdogan has agreed to a ceasefire, he has not agreed to a withdrawal of Turkish forces. This may result in a potential Syrian-Turkish clash. Given the strategic importance of Syria to Russia, there's little doubt that Putin will not allow any attempts at seizing either territory or toppling the Assad Government. Given that Turkey is a member of NATO and an important trading partner of the EU, that will prove to be interesting, especially given that an attack on one NATO partner is viewed as an attack on NATO itself.

How will the other NATO countries respond if Russian troops are introduced en-masse in Syria? In addition, China is also a friend of Syria, supplying it with an array of weapons as well as economic trade (Russia and China are supporters of the Iranians as well). Meanwhile, Israel sits isolated with its back to the Mediterranean with Iranian back Hezbollah to the north and Iranian back Hamas to the south. Not a position I'd like to be in.

So where does that leave us? First, it leaves President Trump with mud on that orange face of his. He has to first find a way to protect our Kurdish allies while at the same time convincing our NATO ally to back out gracefully. He has to be aware of Russia's keen attention to the situation (as well as China's). I would suggest that he be sure to keep both in the loop and well informed of what we're doing. Any misstep could set in motion something no one wants.

Meanwhile, he has to allow Erdogan to save face, especially in the eyes of the Muslim/Arab world. Turkey is 99% Muslim (mainly Sunni), however, it's also very secular and tends to be Westward looking. That makes Erdogan vulnerable to Muslim extremists who would love to turn Turkey into another Iran. As an aside, it would prove to be interesting to see how NATO would deal with a extremist backed civil war in Turkey, especially one supported by Iran. The potential affect could devastate the world economy, especially in Europe.

Trump will have to also find a way to reestablish trust with our Kurdish allies. It's essential, particularly given that ISIS is down but not out in the region. The Kurds not only provided us with military or logistic support, they were major sources of military intelligence. Without them, we would have had a much harder time not just defeating Saddam, but also in defeating ISIS.

Now that Turkish backed groups are busy freeing ISIS prisoners, we can expect that they'll be back with a vengeance. You can expect a uptick in terrorist attacks throughout the region, as well as in Africa, Europe, and even in Asia which has a large Muslim population. Lastly, you can bet that they'll look for ways to strike the U.S. both overseas and domestically.

I generally like Trump. I like his pro-American attitude and willingness to challenge that corrupt bipartisan status quo which has taken control of the government. As I've written many times before, and as academia has verified, America is an Oligarchy. Our Republic is gone. All that's left is the illusion of what we once had similar to what ancient Rome experienced. Trump has shown the moxie to fight back.

Naturally, he's being fought tooth and nail every step of the way by Democrats and Republicans and their corporate owners. Whoever advised Trump to step aside and allow the Turks to invade either knew nothing of political realities of the region or intended to intentionally sabotaged him, knowing the potential outcome of what those actions would bring. I don't know which is worse. I know that control, be it of assets, resources, or us, is the name of game and that lives matter little to the Oligarchy.