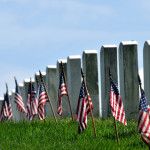 What does Memorial Day mean to you? For most people, I think it means the "official" start of Summer. It's means that public pools are open (except here in Louisville, where Mayor Fischer plans on keeping them closed; his "punishment" for the Metro Council and the residents of Louisville for shooting down his 300% tax increase to make up for a budget shortfall due to his misspending of taxpayer money, but I digress). For the average American, I think Memorial Day means cookouts, the start of summer vacations, a long weekend, the ending of another school year, and spending lots of time outdoors doing yard work or gardening.

For me, Memorial Day means 400,000. That's how many people are buried at Arlington National Cemetery. The land where these brave men and women are buried was once the property of General Robert E. Lee. The estate was originally owned by George Washington Parke Custis, the adopted grandson of George Washington. His daughter, Mary Anna Randolph Custis, married General Lee. It was seized by Union troops near the end of the Civil War and was used as Union headquarters. It was turned into a cemetery for the Union dead in June 1864 in order to prevent General Lee from ever returning to his family's home. It was later turned into a national cemetery in 1883. Arlington National Cemetery is also the final resting place of 5000 unknown soldiers from this nation's many wars.

On average, about three million people a year come to visit Arlington Cemetery; to see the white marble headstones lined up in perfect row upon row. Beneath each headstone lays men and women from every war and conflict. At Arlington rank, title, or social status means nothing; death treats everyone equally. However, some were well known in life like Audie Murphy, Lee Marvin, President John F Kennedy, Medgar Evers, Lt. Colonel Virgil "Guss" Grissom, General George C Marshall, Joe Lewis and Senator John Glenn. But for every name you might recognize, there are thousands of everyday men and women who were anything but ordinary. It is also the location of the Tomb of the Unknown Soldier (also known as the Tomb of the Unknowns), a tribute to the dead of World War I, World War II, the Korean War, and the Vietnam War, which was originally dedicated in 1922.

Some of you may not know that Memorial Day was first commemorated 1861 in Warrington Virginia to honor the Confederate dead. In 1862, the women in Savannah Georgia followed suit in honor of their Confederate dead. In 1863, this was extended to include all those who had died at Gettysburg. Later, after the War between the States had concluded, the United Daughters of the Confederacy, which had evolved from the Ladies Memorial Association, established chapters throughout the South in which to honor and remember their war dead. This was known as Remembrance Day, although in some states it was called Memorial Day.

In 1868, the practice which had started at Gettysburg, was increasingly adopted throughout all the Northern states. In July 1913, surviving members of the North and South gathered again in Gettysburg. This time it wasn't to fight, but to remember those who had died in what was the bloodiest war in American History. A war which claimed between 620,000 and 850,000 men. By contrast, World War II was responsible for 405,399 US lives.

Nevertheless, the act of remembering the nation's war dead was firmly established, though generally known as "Declaration Day" for all the flowers, ribbons, and banners starting around 1882. Gradually, more people returned to the name, Memorial Day", which had become the most common name by the end of World War II. So, in 1967, the Day of Remembrance and Declaration Day officially became known as Memorial Day.

In addition to remembering those who gave their lives for this country, lets also not forget that we are losing on average 20 veterans a day to suicide, often as a result of post-traumatic stress disorder (PTSD), service connected injuries (especially among post active duty disabled veterans). Some find they are unable to cope with their experiences in combat or with their injuries and turn to drugs and alcohol.

Also, we need to remember that on any given night there are an estimated 40,000 homeless veterans on the street. Homeless veterans make up just under 10% of all homelessness. 57% are white while 26% were black with the rest being multiracial. 85% are listed as non-Hispanic. Approximately 89.5% are men. The states with highest number of homeless veterans are California, Florida, Texas, and New York, but every state and nearly every community has homeless veterans or those with temporary shelter.

My generation, the Babyboomers, has witnessed the passing of the last veterans from the Spanish-American War, World War I, and with an average of 372 World War II veterans dying each day, we'll likely to see them last of them pass as well. We are also the Children of the Cold War, and of Vietnam. We witnessed the assassination of the Kennedy Brothers and Rev King, the Watts Riots and social unrest, the anti-War Movement, the Civil Rights Movement, the Bay of Pigs fiasco, the Cuban Missile Crisis, as well as the land on the moon. Some of our parents recall the Great Depression and witnessed the lost of the last veterans of the Civil War. They may even remember their fathers, uncles, and perhaps older brothers going off to war in the Pacific, in Europe, or in Korea. We, as a People, have witnessed and endured much, however, we owe much to those who sacrificed their hopes, their dreams, and even lives for our sake and that of our children and their children.

Memorial Day should be a day where we come together not just with family or friends, but also as a nation to remember those who gave everything for this nation and our freedoms; freedoms which are now under attack from many corners both outside and inside this great country of ours. We should also give thanks to those who are still fighting their own private war---the homeless veteran, those who suffer daily with their injuries, and those who are struggling to overcome their own demons.

Lastly, as I do each Memorial Day, I'll close with a very special poem, "In Flanders Field", which was written in 1915 by Canadian Lt. Colonel John McCrae, which was inspired by his experiences during the Second Battle of Ypres during World War I. The battle lasted from April 22 through May 25th. During that battle chlorine gas, a deadly poison, was first introduced by the Germans to break the deadlock being fought in the stench of the trenches. The battle claimed the lives of some 112,156 young men (the average age was 19), although the exact number will never be known, but if it were, it would no doubt be much higher.

John McCrea volunteered to serve as a gunner and medical officer for an artillery unit. Following the battle, which had also completely leveled some of the local towns and villages, he was stunned one early morning noting how quickly the crimson red poppies would bloom on freshly closed graves and the eerie silence according to one story. I suspect there's a good deal of truth in it since he did personally bury a close friend, Alexis Helmer, who had been killed on May 2nd. The poem was originally published in 1919. So, without further ado, here is "In Flanders Fields",

How many homeless veterans are living in the US?