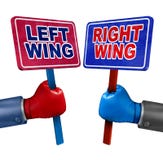 Maybe it's me but I just can't help laughing at some of the partisan name calling that goes on between the Left/Progressives/Liberal/Democrats and the Right/Conservatives/Republicans. Of course, I understand the whole point of it, which is to demonized the other side; unusually by accusing the opposing side of doing the same thing you're doing! At the same time, there's something a bit frustrating about how many ordinary people accept at face value these accusations. I don't know if that's because of a faulty education system, willful ignorance, or the part of the joy of living in a echo chamber is never having to actually think for yourself.

I suppose it's a bit of all three. There's no arguing that the education system in the US is sorely lacking. According to all the data metrics, American school kids are mediocre at best (we usually rank in the lower middle half according to most surveys). In specific topic areas, we tend to rank towards the bottom quadrant. Some school systems in the US are dismal; little more reformatory prep schools than anything. Teachers are forced to act more like wardens or babysitters than educators (that is when some of them aren't not having sex with the kiddies).

I don't know what went wrong. Look back at the school books of the 1930's or 1950's and compare them to the academic criteria of today from elementary school through high school. To be blunt, kids today couldn't begin to hack it. Since the 1960's, we've continued to dumb down education. Instead of preparing these students for living and working in the world, we simply flunk them on through and wish them luck. We spend more time worrying about hurting their feelings than we do preparing them for life.

We tell them they need to go to college (where many our ill-prepared for) and four or six years later, they wind up with useless degrees in terms of their marketability and a debt load they'll spend most of their early adulthood paying off. Instead, we should recognize that not everyone if cut out to go to college, and not every job needs a four year degree to do. Many of these young adults would be better off going to a technical or trade school. First, you get through it a heck of a lot faster. It's cheaper, so not huge debt to pay off, and there's actually a demand for those jobs. Besides, the money is usually great and so are the benefits.

As for the willful ignorance, what can I say? You either do your own homework or you have to trust what you're reading, watching, or hearing. As adults, we're expected to have at least some common sense (often wishful thinking I know). However, if what you're reading for instance is from a partisan site, you can be pretty sure that what you're reading is slanted. It doesn't matter if its Left or Right or whatever. Each side always tries to put itself in the best light and make it seem that the other side is Evil incarnated. That's just the way it is.

Let's take as an example the recurring theme of the Left calling the Right (be they Alt Right, Conservative, Tea Party, or Republican) something like "Fascists" or "Nazis". Meanwhile, the Right calls the Left (or Liberals, progressives, or Democrats) names like "Socialist" or Communist (often using the two similar but unrelated terms interchangeably) or "Nazis" (yes, seriously). First, neither side are Nazis despite often deliberate misrepresentation of the abbreviation, however, the term is used as the all-purpose "boogeyman" to scare people into envisioning people goose stepping down the street and folks in brown shirts going around beating up people.

So, before we get into some detail, let's get the term "Nazi" out of the way. The term "Nazi" is actually shorthand for National Socialist German Workers Party or Nationalsozialistische Deutsche Arbeiterpartei in German, which abbreviated as " Nazi" from the first two word, Nationalsozialistische (it was more formally known as NSDAP). The "National" meant Pan-Germany, or all the lands which were or had been inhabited by the Germanic People. "Socialist" didn't have the same meaning Karl Marx attached to it. It was not the internationalist form of socialism that served as the foundation of either Socialism or Communism.

What Hitler meant was a community of people of similar ethnic heritage, values, culture, and traditions. In short, a Germanic/Nordic community supporting a common heritage and belief system. "German" really needs no explanation. "Workers" meant just what the word means, ordinary working class people, which included middle class, craftsmen/artisans, and white collar employees and shop owners. The name was purposefully chosen to attract a broad base of supporters (the original name of the party was "German Workers Party" or "DAP" in German. Still, it was far Right, racist (meaning supporting a particular race. In this case, German/Nordic), populist, and nationalistic.

In terms of economics, the Nazi economy was pretty much Right of center, but in terms of social programs, they leaned slightly Left. However, unlike the Left, the Nazis dissolved all unions, but not entirely. In their place they created a national union, the German Workers Front or using the German abbreviation, "DAF" (they even adopted the International Day of the Workers, May 1st, as a national holiday; something the old unions could never get accomplished), while keeping the many of the rights and benefits the unions had provided plus the power of the State (there were some negatives to this, but that goes beyond the scope of this article).

Corporations maintained their independence and carried on as before. Of course, many supported the State when it came to its war efforts because, well, just like now---military contracts pay extremely well and they often got subsidies from the government. However, capitalism continued. There were of course, changes in education (including a toughing of academics and physical education), mandatory community service, new social programs such as ending smoking, more Holistic healthcare and better hygiene, environmentalism, public housing, and so forth. However, voting was suspended. The people would have to trust their fate to one party and above all, one leader, which many Germans were willing do after what they perceived was the failure of a democratic Republic under the Weimar Government. As an aside, Fascism is where big business and the government work in partnership to achieve economic and political control over society.

Now, Communism was the exact opposite. First, there was no private enterprise. The State owned everything---farms, factories, and you. It regulated nearly everything you did. So, let's break Communism down. One of the most important things to understand is that "Communism" as we've come to know it is quite different from what Karl Marx envisioned in his theories of State and economics (better known as "Marxism"). "Communism" developed more as a reinterpretation of Marx's ideas by Vladimir Ulyanov, better known to the world as Vladimir Ilyich Lenin.

Under Marx, all means of production would be owned equally by the workers. All profits would be shared equally. Everyone would have the same access to education, medical care, ownership of land, and so on; "each according to their needs" was the catchphrase. Race, ethnic group, religion, gender were meaningless to Marx. This "worker's paradise" would be global, hence the term "international". Instead of banks, there would be something like credit unions. Businesses would be run by worker or employee committees. These committees would chose representatives to come together in other committees to work on other projects. This was Marx's version of Socialism. However, under Lenin and later, Joseph Stalin, there was to be "temporary" intermediate phase called "dictatorship of the proletariat" whereby the State would take ownership of everything until such time that the workers could assume full power. This, of course, never happened.

Under what was essentially Stalin's version of Communism given Lenin's early death soon after the revolution, the State assumed complete control over society, what education, to who worked where--depending on the needs of the State, to complete control over factories. All businesses were State owned or State approved. There was no independent businesses; there was no free enterprise. There were elections, but only one approved party and usually just one candidate per office on the ballot. This then is Communism, which is obviously different from Socialism.

So, when you see, read, or hear one group making some dire accusation about another that so-in-so are "Nazis" or "Communist" or try to use the term "Socialist" interchangeably, you'll know better. By the way, lately I've been seeing the term "Democratic Socialist" used as a form of Communism, and you're right to be suspicious of the comparison. Democratic Socialism is first and foremost, a democratic society. However, the citizens determine what is and isn't needed, and take full responsibility for paying for it. So, if they vote for a tax increase to pay for roads, schools, or healthcare, that's fine. The citizens stepped up and took responsibility. By the same token, the citizens could nix various government programs they don't want to pay for. Another way of thinking of it is as an ideology which strives to introduce democracy into the workforce, using worker or employee co-operatives and committees (formal and ad hoc) which aim to ensure that there is a public provision covering basic human needs which are satisfied with full knowledge and approval of the costs by the workers. Of course, these definitions are the highlights. We could spend days and weeks examining every nuance, but you get the idea.

I guess you can see why I chuckle at the constant finger pointing by various groups at their ideological nemesis and how they will purposefully misuse a term or distort a description in order to demonize the other side. Ultimately, the idea is to play on our emotions, and hopefully, get us to react without thinking. In the end, it's to divide us and keep us from realizing that we have more in common than not; that we share the same common enemy in the ruling Oligarchy which seeks absolute control.

The Oligarchs already control the economy and financial system. They already control 96% of all media outlets; we so often find ourselves dancing to their tune without even realizing it. They control both political parties. No one gets elected and stays elected without their support, especially since the Supreme Court mistakenly upheld "Citizens United". They help write the bills that Congress then votes on, and provide summaries for the Congress members to read, along with their recommendation on how to vote. Divided, we focus our frustration and energy on each other. United, we focus our anger on those responsible for the destruction of the Republic and on all the manufactured hatred. It's up to us...for now.