We Interrupt this National Decline...

It was once said that that all roads led to Rome. It was true figuratively and as well as literally. With some 100,000 miles of road, it provided direct access for the Roman legions to any hotspot within the empire. It established trade routes throughout the empire and eventually even connected to the Silk Road to the Near Eastern nations, India, and finally to China. But, as goes another old saying, as Rome's roads went, so went the Roman Empire and its ability to defend the empire and its trade routes, and with that, along with the decline in political stability thanks to the ineptitude and corruption of the political class and the financial elites, taxes, decline of the water systems, agriculture, decline in innovations, quality of the fight forces, increases in pirates and illegal immigration who didn't integrate, the rise of the poor amid the decline of middle and business class, ever more successful foreign invasions, devaluation of its currency, and a host of other factors---some major but most subtle, the glory and the might that was Rome gradually faded over the course of about 300 years until it became but it memory.

Much the same has been said America. Certainly, we face many of the same factors. Like Rome, we went from rule by a monarchy to a Republic and now to an oligarchy; controlled by transnational corporations which have no loyalty to either a nation or national ideals. Wealth--- economic and political control---is the hands of the top 1%. Our Middle Class is all but nonexistent while not the ranks of the poor increase, some communities and cities look like they belong to some third world nation, as social services decrease due to expense. We too experience a debt that not only can we never hope to pay, but is actually unsustainable. We too are being invaded by illegal immigrants looking for a better life, but few are finding it. They too are refusing to assimilate. While are military remains strong (though, like Rome, there is talking about incorporating illegal immigrants as an avenue to citizenship), it is ever more dependent on technology, which makes it vulnerable to shortages of those able to operate and maintain it as our educational system continues to decline.

Like Rome, we face a decline in social morals and a sense of community values in the name of "inclusion", or as we would say, "political correctness". Our roads, dams, electrical grids, bridges, and highways are crumbling too, and again, like Rome, a public reluctance to paying for repairs through higher taxes (they often did so out of the pocket of a government official, usually seeking higher office). Trade and often innovation has steadily shifted overseas, not for lack of resources, but avoidance of labor costs or in some cases taxes, and then reshipped back into America by these stateless corporations. Meanwhile, public funds are often diverted to pay costs they incurred or for poor management while local businesses struggle or are forced to close. 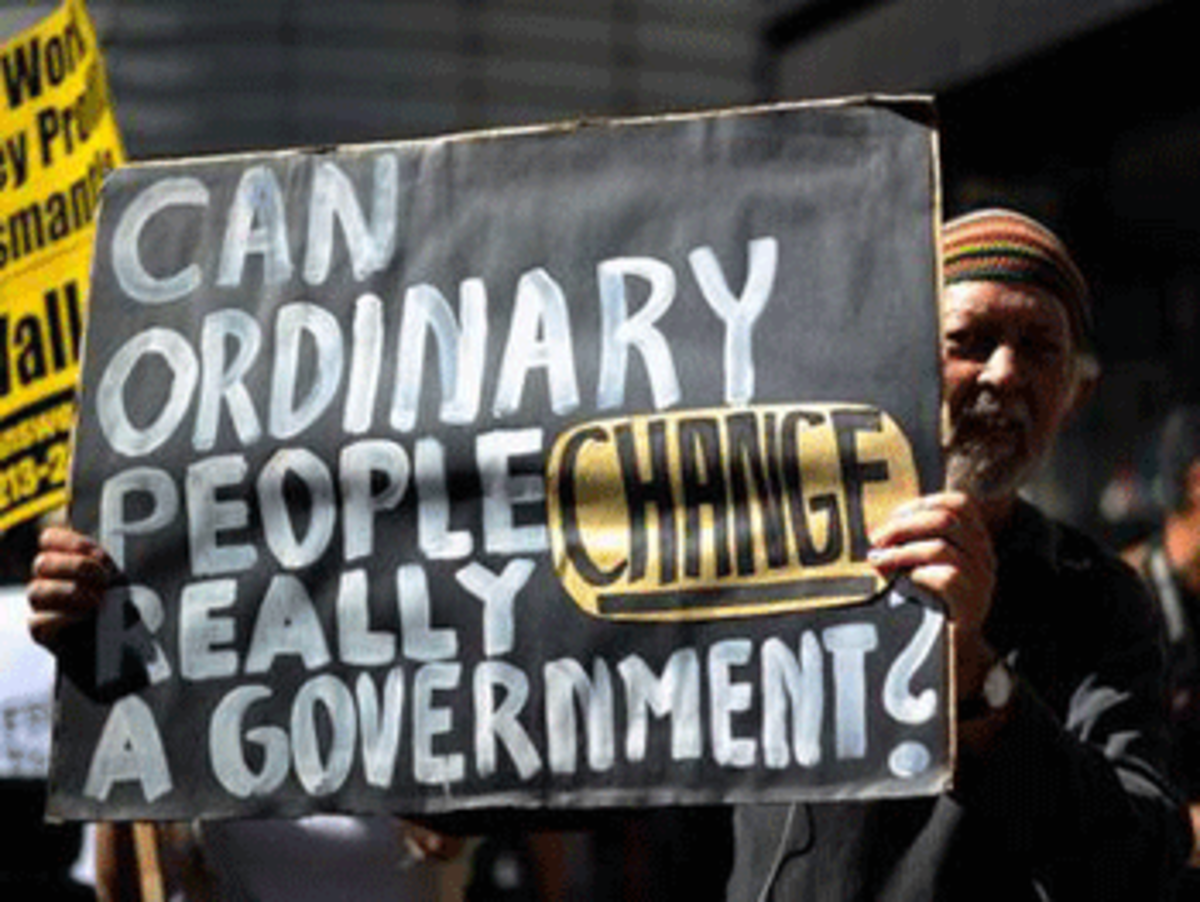 I could go on and on, but we all get the picture. It doesn't matter if you lean politically Right, Left, or like the majority of Americas, to the center and increasingly independent. We've all witnessed the rise of the Occupy Movement which opposes the economic and political control of Corporate America and the 1% while others, such as the Tea Party, opposed to over reach and intrusion of a growing federal government clamber for a return to the original intent of the Founders. Therefore, it seems to me that it's time that we refocus the discussion. We see what's wrong with America, though we may have different solutions. Perhaps it's time for changing America and move away from mere criticisms. The powers that be hold power largely because they've been successful in dividing us, which is ironic if you accept that we largely want many of the same things. We---as individuals and communities---have allowed ourselves to be pitted against each other across artificial divides. As long as we argue and fight each other we fail to see those who are not just the source of our misery, but profiting off of it.

Maybe it's time we reconsider if we want this to remain a single nation? Perhaps we time we go our separate ways. Or, as some contend, the Constitution (largely usurped already) is outdated; made obsolete by technology and societal changes unforeseen by our Founding ancestors? Perhaps a democratic socialist state which serves the needs of all equally is what we should strive for (and no, we aren't "socialist" now despite the talking heads on the Right. We are, however, increasingly fascist---corporation rule per its creator Benito Mussolini) or should we rely on our innate abilities embrace libertarianism as espoused by Jefferson? Some would argue that we've advance to far as society for that---an ideology best suited for small agrarian societies.

The demise of the oligarchy and restoration of the Middle Class are givens I think. How about freedom? How much do we want? How much can we stand? What kind of freedom to we want? China calls itself "free" and so does Holland. What form of government do we want now that we no longer have a democratic republic? Do we return to a democratic republic but with greater restrictions? Certainly ending gerrymandering, adding term limits, real finance reform and reversing "Citizens United" I hope; perhaps too, revising federal judicial appointments, including federal judgeships and the often out-of-touch Supreme Court. What about proportional representation like the other limited democracies have or mandating voting? Regardless, let's consider the America we want and not the one Washington is giving us.

The elites control us by controlling our ability to communicate. Did you know that only six corporations control our public media?

They attempt to mold and manipulate what we think and how we act. Mao Tse-tung once said that power came from the barrel of gun. Nowadays, it's more likely to come from the click of mouse. Within little more than a decade, we've witnessed how social networking and the Internet has brought down military dictatorships, theocracies and other corrupt governments. It's little wonder nations, including the United States, have banded together in an attempt to control, regulate, or monitor the Internet. The idea of people exchanging ideas and find a commonality brings fear to those who try to inspire fear and intimidation to their people. This may yet prove to be more powerful than Mao's bullets. This then is our best tool to molding a nation or perhaps a world into what we want. As has been said, people don't want wars. Governments and banks do.

And speaking of the world, we, as Americans, must understand and accept that we have no obligation or even right to impose our values, beliefs, or even our form of government on any nation or any people. All individuals have a natural right as human beings, to chose freely the form of government they want irrespective of what their neighbors desire them to have. Though not alone, America has interfered and attempt to impose its concept of Americanized government or worse, violent militarized juntas on people for the sake of economic profit and corporate control. If we demand freedom for ourselves, they we should do less than allowing others the right to chose their own governments whether we agree with it or not.

In our present military situation, our response to 9/11 was to find and bring to justice those responsible (and accepting, however painfully, the reasons why 9/11 took place). Beyond that, we proceeded for the sake of economic---corporate greed--while claiming the virtues of "freedom". Kuwait was not liberated for "freedom of Kuwaiti People" or even Royal promises of social, political or "gender" equality---none of which never materialized, but for influence and control of assets. The invasion of Iraq wasn't required. Saddam Hussein's Iraq was already impotent militarily and politically. It wasn't done for the sake of the Kurdish People who we've promised much and delivered little. It was for the sake of controlling Iraqi oil and gas. What it did, thanks to an incomplete and unrealistic occupational plan, was open an Pandora's Box that has costs the lives of thousands of brave military personnel while at the same time providing a gold mine for lobbyists, contractors, the WTO, the IMF, and others, not to mention a perfect sandbox for testing the military's latest toys.

a perfect excuse to impose restrictions on our freedoms which we never would have previously tolerated; surveillance of all/threat by few/denial for your own good is our new mantra, and a way to cover-up a weak economy racked by unsustainable debt and greed through a never ending supply of recruits to keep the employment numbers down and keeping the economy running on a artificially inflated "war economy". This too is something we must address since this conspiracy, which is not of the making of a few extremist crack pots, but adopted by both parties as cover for the oligarchs who now run our country. Meanwhile, endure those who have a visceral hatred of this country; who attempt to make profane the American Ideal and its symbols while pursuing every recourse to weaken and belittle this nation.

These are things we each see and mostly agree on. The powers that be will continue to obfuscate, distract, divide, frighten, or if necessary, threaten. It is also quite capable deceit, lies, of manufacturing evidence or worse. The question I repeat, is not to continue to debate the merits of what we all see, but to agree that we must begin to find ways of addressing them. Whether the status quo agrees is irrelevant. Ultimately the only real power it has is the power we cede to it.