What do you believe?

How religious is America? What would be your best guess? According to a survey taken in August of 2014 on behalf of the Religion News Service, America is in the midst of a "great decline" among the mainstream churches. In 1994, 94% of those who attended church identified with that church. Today, that is about 85%. Church membership is down from 69% ten years ago to approximately 59%. Speaking of church attendance, that's down to about 53% in 2014 compared to 62% in 1994.

The role of religion has declined too. In 1994, 88% said religion was important in their lives. Today, only 78% say it's important. In terms of relevance, that too has declined, albeit not significantly, from 79% to 70%. However, what may actually be a more important indicator is the result of five Gallup polls averages which shows that overall religious importance has declined from 78% to 69%. That is significant. According to a recent Gallup Poll, 53% of those surveyed said they were satisfied with religion's role in public life. While that is a majority, its certainly isn't a commanding majority, especially when you consider than in January 2001, that number was 64%, and a year later, in 2002, that number was 68%.

How does that break down along demographic lines? This is an important question given that religion has been interwoven into the 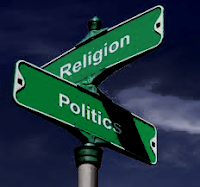 fabric of America since Jamestown, and religion is still reflected in the voting booths. 9 in 10 Americans believe in God; that's 92%. Going back to "the Greatest Generation" of the WWII era, that number was 96%. Between 1953 and 1967, it was incredible 98%. Women tend to believe in God more than men (94% to 90%). Older Americans too believe in God more than those between 19 and 29---94% to 84% (perhaps older populations are simply covering their bases!). The most interesting aspect of the poll was how the percentages changed when the respondents were asked if they believed in a "Universal Spirit" or a "higher power". That number jumped by 12%. This would seem to mean that while there's a strong belief in a Creator, fewer identify with the more dogmatic version of organized religion.

Millennials (ages 18 to 33) are the next big demographic wave to hit as we've often discussed on this blog. With 50% of them self-identifying as independent, Millennials have no love for the current social/economic/political system. This includes the two party duopoly, the corporate capitalist economic system, with a split between small "L" libertarianism and democratic socialism (with the later getting the slight nod), as well as discrimination of any sort, including gay marriage, or interracial mixing. They are the most diverse of all the generations (43% are non-white). They tend to vote Democrat, though they are not aligned with the Democrat Party; they just like the more liberal stance of Democrats on social issues than the GOP (for instance, 68% favor gay marriage while 69% support legalization of marijuana). So it should come as no surprise that Millennials have little positive to say about religion; at least organized religion. Millennials have proved to be both optimistic about the future and on the whole, willing to roll of their sleeves and get to work when they find an issue or cause that's important to them. They are also the most technologically connected of any generation. They've never known a time without handheld electronics, computers, or social networks. They are also more inclined to delay marriage and have the largest percentage of debt (mostly school loans).

When it comes to religion, 36% say they consider themselves as religious, with almost 30% say they are not affiliated with any religion (read "organized religion"). This compares to 21% of Gen X (ages 34 to 49), 16% of Boomers (ages 50 to 68) and 9% of the Silent's (69 to 86) who say they aren't religious. When they are affiliated with a religion, few are members of conservatives churches since the majority are liberal to very liberal on social issues. 58% of Millennials say they believe in God, while 28% say they believe, but they're not entirely sure actually exists, and 11% say they don't believe in God at all. Compare this with 69% of their older Gen X brethren, 73% of their Boomer parents or 74% of their Silent generation grandparents.

So, what's the takeaway here? I think it's the realization that religion---particularly mainstream organized religion---will likely decline as Silents and the first wave Boomers (those born between 1945 and 1964) age out. Non-organized religions, especially non-traditional faiths like those which emphasis spirituality (Native American, Wiccan), as well as Buddhism or even moderate Islam will continue to take hold due to the increased internationalization of the average American continues amid the decline of the once dominate WASP (with the increase of Hispanics, remember most are Catholic and while some are embracing Protestant churches, most remain, at least nominally, Catholic). What is expected to remain stable is the traditional mostly conservative and socially active black churches such as the Baptists, and AME.

In addition, Millennials do not support church activism when it comes to politics. Again, I think we can, therefore, expect the

role of the religious Right to decline inasmuch as their influence on political matters. For some, this will be viewed as a very bad thing, however, with the largely left of center and even somewhat democratic socialist ideals held by Millennials, the conservative Right as we know it now may become marginalized to a more localized role and off the national stage as a key player. The only way they can avoid this is by adjusting their political plank on social issues to the middle or even slightly center left. This will certainly mean a complete overhaul of the Republican and/or Tea Party as well as a strong commitment the ideals of the Constitution which, at least, the libertarian Millennials support. However, at present, with the near stranglehold the far Right has on the Republican Party (and increasingly on the Tea Party), change may not be possible until the GOP and/or Tea Party accepts that its ideals are out of touch with most Americans. Therefore, the strategy has to be adapt, change or die (as an aside, please recall that America is now governed by a oligarchy comprised of the 1% and a few key corporations, so that too will have to be addressed regardless of all other considerations).

On another level, religion, regardless of denomination, has served as a basic foundation to establishing and maintaining a moral foundation for most Americans. America was founded on Judeo-Christian values along with ideals from the Enlightenment. Religion laid out a set of broad guidelines or boundaries of behavior; or what's acceptable and what's not, which was usually reinforced by our parents and the schools we attended. Americans have always turned to religion when times were rough, either personally or for the nation as a whole. It has been a guiding light or safe harbor. It's also provided inspiration for us individually and for us as a nation. How does the decline in religion impact this? First, I think it's instrumental in defining our moral compass. Just look around you or watch the television and you'll see what happens when people lose their moral guideposts. I guess you can say that this system of Judeo-Christian values and ideals of the Enlightenment helped to create the American character.

Because of the all the trauma and societal betrayals by the government, legal system, education system, and churches, we've lost the ability to trust our institutions. In fact, there is very little institutionally speaking that we have any faith in (perhaps our military is all that's left). That's not to say America is becoming atheist. We still crave a spiritually rudder. That's clearly shown by the nominal levels of those who claim to be atheists as shown in the surveys, not to mention the strong numbers of those who are looking outside of mainstream religions. I think too that the expanse of science has played a part. The more knowledge we as a species acquires, the further back we push back the veils of superstitions and myths, and yet, we still cling to the idea if not the belief in God, and I think we always will. Personally, I find God in the beauty and complexity of life; from the simplest of life forms to the vastness of the Cosmos. I also think that because of the cross pollination of ideas and cultures through technology and globalization, we're gradually learning to accept that there is more than one path to reach what we commonly refer to as God, and that can only be a good thing. Ultimately, we are one species; more similar in our aspirations, emotions, and fears than not. We will either evolve together or we shall perish together.


5 Signs of the 'Great Decline' of Religion in America
http://tobingrant.religionnews.com/2014/08/01/five-signs-great-decline-religion-america-gallup-graphs-church/