It seems that we're increasing, as Americans, attempting to embrace the past rather than the future or even the present. There was a time when we looked to the future in our home lives (The Jetsons, Star Trek) and in our public lives (NASA, World's Fair, sound barriers, moon landings, etc). Nostalgia television is more popular than when most of these shows aired originally. Now, it seems we're lost. We stuck living our lives vicariously through other people's lives (so-called "reality" TV); various talk shows where we watch "celebrities" babbling out their opinions on various, sometimes trivial or useless issues that are none of our business to begin with (and in doing so, implicitly inferring what we should think too) instead of us coming to our own opinions; or watching complete strangers airing their dirty laundry while we ogle, incite, and judge; idiotic "court" TV like divorce court, small claims court, or whose-the-daddy court, and so on. Basically shows about people who've made some really stupid decisions or asses out of themselves while we set back and amuse ourselves at their expense. Look at Saturday morning lineup for kids. What a bunch of junk. At least we had cartoons and shows which made sense, and where the production quality was pretty decent. We wouldn't have wasted ten minutes on any of these shows today. What happened?

Have we dumbed down not just the quality of our kid's education but network television too? Here's a thought. Grab a schoolbook---math grammar, science, history from, say, 1955, from any ole high school, and compare it to one today. Which one is more difficult? The answer should be obvious, and they didn't have calculators or computers. Yeah, we may have access to more information but that's useful only if we know what we're looking for, and what to do with it once we have it, and that goes back to what kids aren't taught today which are critical thinking skills. Some would call it common sense. Kids graduating today from high school can barely spell. Most are on an eighth grade reading level. Their math skills aren't much better, and forget about history, science, and geography. American students tend to rank near the bottom when compared to other countries.

In a 2013 international academic test, the PISA, US students scored below average in math and science and slightly above average in reading while most of the Asian countries scored at the top (with China coming in on top). Germany ranked 12th while the US was 28th, just behind tiny Denmark and just ahead of Spain. Countries like Estonia, Vietnam, Ireland, Finland scored higher than America. Poland came in 9th place, so I guess they're now sitting around telling jokes about us for a change. And while poor countries and poor students scored poorly as expected, money didn't seem to make much difference. Countries which spent less per student didn't necessarily do worse than countries which spent more per student as the result showed. The key results seem to have been better early preparatory time, better trained teachers, adaptability to the student's ability, and, oh yeah, discipline.

Maybe that's why everyone wants a college degree these days. Not because of the higher education and more developed knowledge and thinking skills, but a BA or BS degree will generally get you something equivalent to a high school degree from the 1950's. And another thing, not every kid needs to go to college. Yeah, it's great for certain individuals, especially those pursuing certain disciplines like economics, English, or engineering, but for others, they would be better off pursuing a career in the trades, and there is nothing wrong with a "blue collar" degree. First off, most of fields in the trades are in high demand. We need carpenters, welders, electricians, plumbers, and the like. Secondly, they pay well. Damn well. In many cases, an experienced plumber or electrician can earn more than a lot of individuals with BA or BS degrees (or in some cases, more than some with a Masters degree) and they can do it in less time and way cheaper (imagine 1/3 of the school debt and same or better earning potential).

Perhaps there's a stigma in this country against those in the trades. Not so in other countries, especially Germany. Germany has a highly developed to track educational system which directs students either into the trades or into university based on ongoing academic and aptitude tests as well as personal interest. Germany also has one the world's best developed apprenticeship programs in the world whereby students spend part of the day working on theory and the rest of the day doing hands on work, often at the sites of potential employers. The result is one the most successful academic system in the world, as well as maintaining the most powerful economic engine in Europe, and third overall in the world. German students, by the way, tend to rank near the top academically, regardless of which track they're on.

Back to television, how many shows are actually intellectually stimulating? Most are nothing more than commonplace formula based writing with names or genders, or (occasionally) the professions differing, but little more. Most of this can barely hold the attention of the average 10 year old (perhaps that's why they spend so much time with the faces buried in their IPods). Most of today's television shows leaves us in a mental stupor. How much real "news" are we really getting and how much is just so much tripe? It's a wonder we all don't walk around with a glazed look in our eyes and drool dripping down our chins. Is this then what we've become? Has our educational system so dumbed us down that today's "opiate", to borrow from Marx, is designed to perpetuate the process?

Of course, the best way to control a population is to keep them occupied and uneducated. Is that not, perhaps, what's actually going on here? Are we intentionally being kept busy with, as the Roman's would say, "bread and circuses"? Most of us are so overworked; so overwhelmed with the day's events; so concerned with just keeping the job we have, that all we want to do is come home and turn on the "boob tube" or "idiot box" as we used to call it, stick some food in our mouth and "tune in and turn off". After all, if we're so exhausted from the day's work; so fearful of our job being off shored or losing our insurance or pension or 401k; and we feel so powerless by what we're seeing or reading in the corporate news, that all we want to do is be mind numbed until we blissfully fall asleep in our recliners or couches, what does government or corporations have to fear from its citizens? And if a government doesn't fear its citizens, then its citizens will soon come to fear their government. Sounds like control to me, albeit a subtle and somewhat indirect form of control, but control nevertheless. What do you think? 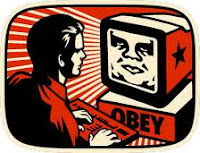 I wish I could say that I was the first to think of this, but I'm not. It's been said a thousand different times in a thousand different ways since time immemorial. However, I think the very best expression of this idea was said by one of History's most evil tyrants, France's Maximilien Robespierre. Robespierre was the one of the leaders---perhaps the single greatest leader---of France's Great Revolution. He started off with good intentions as most tyrants do---freedom, liberty, and brotherhood and the end of a bloated and corrupt monarchy. He is remembered as the originator of the "Great Terror" which took thousands of lives (along with the assistance of the crooked grin of "Monsieur Guillotine") and precursor of the rise of Napoleon, whose reign claimed the lives of millions. It's from Robespierre, we are warned that, "(t)he secret of freedom lies in educating people, whereas the secret of tyranny is in keeping them ignorant". With polls showing an 85% disapproval rating of Congress---a near consistent rating for the last several years and lower than head lice and cockroaches I should add with my own smirk---most countries would be sweating bullets (take that anyway you want) if their disapproval rating gets above 15%, I have to ask: what will it be America? What will you chose to do?


US scores stagnant, other nations pass by us in latest international test
http://edsource.org/2013/u-s-scores-stagnant-other-nations-pass-by-in-latest-international-comparison/52052#.VBOlEZtAKzU