Let's assume illegal immigration and the blatant refusal of the US government to secure the border, is simply part of a secret agreement--an addendum if you will--to NAFTA, which at its heart was designed to create an open border between Canada, the US, and Mexico, was extended to some of other nations south of border. Suppose further that the Latin American nations have chosen either to enact that portion of the agreement that allows its citizens unrestrained access to the US either directly or indirectly through Mexico, and because Washington was unable to "sell" NAFTA (though it passed, it has remained unpopular)---for whatever reasons such as a downturn in the economy, job outsourcing, union opposition, crime, unexpected prolonged wars or especially open immigration, decided to "dump" their children on our border, perhaps as a pointed reminder, or frustration over Washington's foot dragging? If true, does the hidden terms work both ways? What if Americans or Canadians decided to "invade" Mexico or South America in droves? How would their governments react? One or two, or even a few dozen would likely be imprisoned since they have (ironically) a no tolerance policy for illegals or those who aide them in anyway. But what about a few hundred or even thousands? What if these illegal Americans or Canadians demanded access to public services--such as health care or education, and in English? If Mexico's refusal to release a single US citizen, US Marine Andrew Tahmooreisi, is any indication, neither the US or its Latin American neighbors are prepared to deal with reverse illegal immigration, but I think they'd certainly be willing to discuss the situation with us.

There seems to be a global interest in the concept of "democratic liberalism", or as it's sometimes referred to, "friendly capitalism without borders". Think of it as democratic socialism as practiced by, say, Germany as opposed to Scandinavia. Social services, now paid for by States or a federal government, would instead be paid for through a transnational organization of some sort, perhaps the UN or one of its agencies. There has been, after all, much interest in expanding its role along with the influence of the UN, WTO, and/or World Bank, which collectively already controls much of the world's finances (along with the Federal Reserve) and dispersal of capital.

How could this be accomplished? The simplest tool would be a tax levied on a federal government and thus either directly or indirectly on the public. State specific programs would of course remain in place. This transnational "public welfare" tax would detail its own unique qualifications, which would be resident neutral and administered by each host country (notice "host" as opposed to "sovereign"). Since this would eliminate all or most other federal programs, administrative costs should be generally cheaper. The formula for taxation could be based on GDP, which would mean poorer countries would pay the least while richer countries would pay the most. While one could argue against this loss of sovereignty, it could increase the globalization of the commerce and through its concept of "open borders", enhance the development of worker movements since movement of workers would be unimpeded; something I'm sure would be unintended by the powers that be.

But as alluded to earlier, something happened. The US isn't playing the game as it's supposed to. There's the fact that America is becoming more fascist; certainly more "police state" like. To be more precise, corporations are behaving more feudalistic. In keeping with the concept, our national government is assuming the role of a dukedom; that, they are acting like overlords or administrators serving their lieges and lords. There is nothing "democratic" or "socialistic" here since we are not becoming more democratic by seceding more power to the People, nor are the People more in control of their own collective destinies, while government serves less our needs and more the needs of K Street and the 1%. States are increasingly losing powers guaranteed under the Constitution as well and must beg with hat-in-hand on bended knee for the funds to keep local governments going. 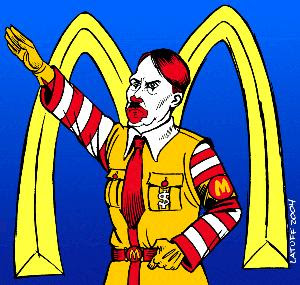 Meanwhile, threats to the expanding modern feudal State continues. Putin's Russia, and to a lesser degree, China and India (which tends to hedge its bets thanks to job outsourcing), have resisted dominance by the global "McState" and are threatening to undermine the US dollar as the defacto global currency; a currency backed solely on the "faith and trust" of a bankrupt government--economically, politically, and morally. Should they succeed, it would collapse the US economy as our unsustainable debts become due but it would have dire consequences worldwide in this interconnected world economy, eventually collapse the economies of the rest of the world like a house of cards. As the saying goes, when the US sneezes, the rest of the world catches a cold, and this cold would be terminal.

Then there's the situation in the Middle East, which appears, at least to yours truly, to have been initally an attempt to increase control of oil reserves and oil production, by these feudalistic corporations and away from these artificially created nation-states, and now appears to have spunned out of control. We are now faced with brutal terror organizations which we helped to create, arm, train, and finance, to deal with the last terroristic organization which we created, armed, trained, and financed ad nauseam. 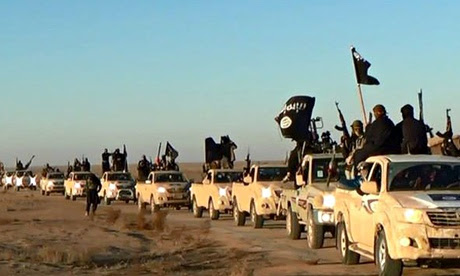 These terrorist groups, which are being portrayed by the corporate media, to operate virtually at will, could, in truth, be easily snuffed out by the power of the US military. But what's the point in that? At present, "terror" is a useful tool in the arsenal of the Corporate State. It inspires fear at home, and thus in the name of security, increases the "demand" for security, or to call a spade a spade, a police state. After all, businesses require stability in order to operate. People require a sense of safety in order to feel comfortable to go about their daily affairs, which just so happens to includes spending money, so what's the loss of freedom among friends...or big brothers? By the way, this "necessary evil" for the care and grooming of a fascist or feudalistic society is never a requirement for either a democratic or socialistic State. So much for the notion we're becoming "socialist".

So, there you have it folks; "the plan" as I've termed it, and an explanation in a nutshell. An addendum to an agreement between Canada, Mexico, and the US to do away with borders, and an apparent reaction by Latin American leaders to Washington's delay in implementing their portion of the agreement due to their (perhaps chagrin) inability to sell it to the US People. Russia, China, and to a lesser extent, India, resisting this latest variation of the game of Risk by the WTO among others while holding a gun at our heads and one at their own. A spiraling problem in the Middle East as the result of failed plans to secure oil reserves by destabilizing resistant governments with the use manufactured "terrorists" who aren't following the playbook. You would think that after Watergate, they would have stopped using amateurs. But, on the upside, using terrorists as sort of the all purpose bogeyman behind every lamppost, an opportunity to expand government monitoring and police power under the auspices of "security" while corporate control of Washington not only increases, but emerges from the shadows. So my fellow Americans, what are you prepared to do? And then what are you prepared to do?