America is, as everyone knows, a deeply divided country. Most of the divisions, be it political, racial, ethnic, gender, or even religious, are largely considered to be manufactured by the news media, which, again, as most Americans know, owned by a handful of corporations. In fact, 90+% of all media and entertainment is owned by just six corporations, which represent a portion of the corporate Oligarchy which controls our former Republic.

The reason for the illusionary divisions is believed to be created in order to better control the populace. The more we are at each other's throats, the less likely we'll focus on those behind the curtain pulling the strings and the easier we are to control, or at least, so it's thought. But regardless, many Americans have little faith in the honesty of the news media, particularly by those on the political Right, and that trend has been steadily growing.

One would think that given the seriousness of the COVID-19 pandemic, political games by the news media would be set aside in favor of the overall wellbeing of the citizenry. Well, you would be mistaken my friends. Despite not just our current health crisis and the subsequent affects on the economy, distrust over the accuracy of the reporting on the virus, such as the infection rate, continues. So too does the general disbelief over the seriousness of the virus, or even its legitimacy in some sectors.

According to Pew Research, 73% of Democrats or those who lean that way were satisfied with how the news media presents the news. Only 31% of Republicans or those who lean Republican thought the news media was accurate, and even less---27%---thought it was actually helping the country. Given our political divide as a nation, this is pretty much what you would expect. But with something as serious and politically neutral as the COVID-19 virus, what would expect the overall public opinion to be? Well, if you said partisan, you'd be right! 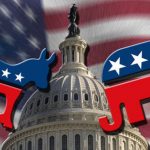 66% of Democrats thought that the news media coverage of the pandemic was accurate and well covered. However, just 31% would Republicans agree. That means that approximately two-thirds of those on the Right believe that coverage of the COVID-19 pandemic is biased in some form for political purposes (most on the Right believe that it's to make President Trump look bad and/or to adversely affect the 2020 elections).

An interesting aside to this is that just 43% of those polled, regardless of political leaning, had a "fair amount" of confidence that journalists typically act in the best interests of the country while a whopping 52% said they had little or no confidence in the integrity of journalists. 56% said that journalist have "low" or "very low" ethical standards. That in itself is quite a condemnation of the news media, which includes talk radio and television programs which engage in political discourse, regardless of any other divisions.

In a rare showing of partisanship, it's worth noting that the majority of Democrats and those who lean Democrat and their opposite numbers (94% and 85% respectively) agree that the virus should result in at least some closures such as public schools, restricting international travel, and cancelling entertainment and sporting events, as well as restricting groups of ten or more with a majority of 82% and 92% Democrat and Republican respectively.

In what is an rare agreement between the two political camps according to Pew, 84% of Republicans and 74% of Democrats say that public officials have, in general, done a good job in how they've managed the crisis (this includes local, state, and federal levels). Where partisanship rears its ugly head is where President Trump is concerned. 85% of Republicans and Conservatives in general approve of Trump's handling of the COVID-19 crisis. Compare that to only 12% of Democrats and Liberals. That is a substantial difference. Could this be due to how President Trump is portrayed by the news media?

Since this outbreak began, I've noticed a growing chorus on the Right claim that the virus is not as severe as originally reported. Many are increasingly saying that masks are unnecessary or that virus itself was created specifically as a tool to attack our freedoms and/or expand government control. Ironically, many on the Left are joining in on that last point. They claim that the virus is real and severe, but it's being used by the Trump Administration to expand the power of the Executive Office, restrict our rights, or perhaps even to suspend the November elections to give Republicans an unfair advantage. Either way, it underscores our collective deep distrust of the government.

Along those lines, the Pew survey showed that 39% of Republicans believe the public is overreacting to the virus while 30% say public reaction is appropriate and 31% think that the public's reaction to the virus wasn't serious enough. Compare that to the Democrat's responses of 25%, 27%, and 48% respectively to the question. Obviously Democrats think that much more needed to be done, which is in keeping with their philosophical belief of a larger and more pro-active government.

In keeping with the responses above, it's therefore reasonable that they should feel similar when it comes to the seriousness of the COVID-19 virus itself. Almost 80% of Democrats and those who lean Democrat believe that the virus is a major health crisis and yet only 52% of those on the Right agree.

When it comes to the economy, which has been seriously impacted by the closures, Democrats take a much more pessimistic view. Almost three-fourths (74%) of those surveyed said that the effects of the virus on the economy will result on a recession or even a depression. Republicans on the other hand aren't quite so negative, but 52% of them agree. Recent reports out of the Federal Reserve support the pessimism, especially for those on the lower end of the economic ladder. 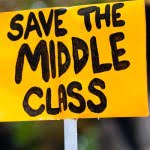 Bear in mind too that America has very little of its Middle Class left after the majority of its production and manufacturing jobs were shipped overseas in order to increase corporate profits and emasculate unions. The Middle Class had been historically America's backbone. This left the country as primarily a service economy with steeper personal and business debt for the smaller "mom and pop" companies.

Couple that with America's huge income inequality gap, inadequate healthcare and we have a potentially serious problem. The top 5% owns 248 times more than the average American. As an aside, did you know that the U.S. has the widest income gap of all the G7 nations or that CEO compensation has grown 940% since 1978 compared to 12% for the average worker? How about CEO salaries which are on average 341% more than the average employee? Not unexpectedly, the gaps are worse for minorities including for women. Obviously that is a recipe for disaster to a political, social, and economic system which few have any faith in.

More than 33 million workers have lost their job as a result of the closures either temporarily or permanently and filed for unemployment. Despite a temporary extension and increase in unemployment benefits and the unprecedented stimulus check, the American job market has gone from one of the best ever to one that could ultimately be on par with the Great Depression of the 1930's. Many fear (and justifiably) that smaller businesses will not survive the shutdown or subsequent slower economy and will close permanently.

Meanwhile, the large corporate giants will weather the economic storm with little measurable impact long term. Some businesses have tried to remain afloat by converting to takeout/delivery service and by offering employees an added financial incentive to work. However, that incentive is in all likelihood temporary and pay will revert to what it was before the crisis. What we will have post-COVID is a much more volatile and economically unstable country with a strong possibility that the virus will have a repeat appearance if past outbreaks holds true.

So, where does that leave us? As the polls showed, there is a strong distrust of not just the government but the news media as well. Economically we were already a highly vulnerable country despite the strong labor market. The virus has affected our food chain just as it has smaller businesses in general, and created artificial shortages thanks mostly to hoarding. The result will be more and longer unemployment. It has severely strained our healthcare system and exposed many of its weaknesses.

It has made the fiscal inadequacies of state and local governments all that much worse, and left them demanding more money just to provide basic services. Yet, with more people either unemployed or underemployed and with household incomes already stretched to the breaking point, the risk of tax revolts are a real possibility. With both of the corporate controlled political parties hemorrhaging registered voters, not to mention long standing opinion polls of Congress, the Presidency, and Judicial system which would have politicians in other countries hiding under their desks.

Perhaps this virus wasn't meant to be the straw which broke the camel's back. Perhaps instead it's the last switch before we careen over off the rails into the canyon of historical mistakes; a broken collection of history's mistakes and "could-have-been" and end up as just another second tier country with a police state style government. I prefer to see it as a warning. The virus has exposed a seriously sick nation. Now is the time when we need to address a broken political and economic system and move beyond outdated and corrosive Left/Right "partisan think"; inadequate healthcare, wage and income inequality, inferior schools (especially in poorer neighborhoods or Native American reservations), not to mention our crumbling infrastructure which is decades overdue in repairs. Now too is when we need to reexamine our role as the world's policeman. It's time to rethink our dependence on fossil fuels and destruction of rainforests.

But if we're to act, we must do so now, while we still have the time. The thing about opportunities is that they don't last. We need to put aside our partisan thinking. We need to realize that most of the differences we are being fed by the media serves the interests of those in charge; the ruling Oligarchs and the political class who cater to their whelms. This is our country. Government is to serve our interests, not the wealthy elites. This is our time to act.

Americans' Views of the News Media During the COVID-19 Outbreak


CEO Pay Skyrockets To 361 Times That Of The Average Worker


6 Facts About Economic Inequality in the U.S.

Thank you, Paul, for another terrific article...I'm wondering whether we'll be demanding public oversight and some democratic perspective re our technical crafts. If we don't look with a critical eye at the ease and glibness of how digitization achieves connections and preps activities, we surely will be giving up freedom for false security. And if security is our aim, how much can we depend on the validity of the data feedback, whether routinely or during a crisis, if network functions are determined by huge private entities such as Amazon or Google? If public funds were to defray the expense of running these technologies, maybe public ownership and control would make them more accountable to us. It might benefit us were cyber life a public utility not run for profit. As you and Ben Franklin imply, trading freedom for security will get neither, but protecting ourselves from privateers who blithely seize our freedom may help us seize it back.