Protesting to Stop Gun Violence: The Solution is Closer to Home/Book Review: Crashing The Parties

Apparently there are dozens of "anti-gun" protests happening all over America this weekend (March 24/25 2018) under the banner of 'March For Our Lives". Literally hundreds of thousands of individuals, most of them junior and high school age as well many who are in college, are showing up in towns, cities, and even the cesspool known as Washington DC to protest gun violence. I wouldn't be surprised to the final count is well over 1 or 2 million.

Being a child of the 1960's and 70"s, it brings warm cockles of my heart to see so many people take to the streets to protest for something they believe in. I grew up watch the Civil Rights marches; the anti-war protests, and later on, marches against gender discrimination. Most of the those marches were peaceful, or at least started out as peaceful, but ended up becoming violent when they clashed with the police or occasionally, the National Guard. Thus far, these protests against gun violence has been peaceful, which they should be quite proud of.

Nevertheless, my main concern over the marches is the issue itself and the proposed solutions being tossed around. There is no question that gun related violence is on the increase, especially with regards to attacks in schools. Many (if not all) of the attacks have come from a fellow student (or students). From all that I've read, these individuals were usually marginalized by their fellow classmates; treated as "odd" or "weirdoes" or whatever. They tended to be excluded from normal school events and functions. They had little positive interaction with their teachers too. They, in effect, went through school largely unnoticed, and when noticed, it was almost always in some negative way.

It's not uncommon for schools, and society in general to treat these individuals as being "mentally ill", which they're not; not really. They are simply different. Perhaps if this "difference" was channeled in another direction, these same would-be mass murders who, instead, become artists, designers, or even writers. Instead, they're drugged in order to control their behavior when in reality, it's simply so their parents or teachers don't have to deal with them.

Speaking of parents, another thing these kids have in common is that they tend to come from middle class or upper middle class families and are often left on their own. In fact, it's the parent who are often most surprised to see their child's picture and/or name of the TV screen as being the prime suspect, and their first remarks often include phrases like "we gave them everything", "we gave him his own space", and so forth. What, in reality, they are saying is that they were so focused on their own lives or those of their other children, those who needed their attention the most were ignored.

Many of these kids look elsewhere for some form of validation. They tend to embrace the negativity of which they're accused. A few emerge themselves into a "Gothic" persona. Some dive headfirst into the darker aspects of Heavy Metal or go the into a completely different direction such as fantasy, role-play. Hopefully, this will be limited to concerts or "Cosplay" events where they interact with like minded individuals who are often a marginalized. While this isn't ideal, it does help create some personal bonds and relationships which is much better than being alone and feeling like an outcast. I can't think of many things worse than being a teenager, and all that involves, and having no one of your own age to talk to. The lonesomeness and isolation would be crushing.

A few of these same kids also look to history (I believe the demonic duo at Columbine High School were guilty of this). The kids (and they really are still "kids") look to people like Adolf Hitler, Heinrich Himmler, Joseph Stalin, or some other demented individual like Jeffery Dahmer, John Wayne Gacy, or some fictional characters like "Jason" or "Freddie Kruger" for inspiration. As crazy as it sounds to us, it makes perfect sense from their perspective. After all, most of the people were outcasts themselves. They were misfits; marginalized or ignored, yet they went on to command the world's attention.

The "how" aspect doesn't really matter to them, nor does the "why"; not really. All that matters is the results (and as we all know, mostly from personal experience, teenagers and even young adults don't always think things through to a logical conclusion). This really isn't about revenge, although I'm sure that comes into play if the opportunity represents itself. For a brief moment, they can garner the respect (or fear, it's the same thing to them) they've longed for, even if it means they must die in the accomplishment of it. I suppose them old adage than "any attention, even bad attention, is better than no attention" holds true here.

So, while I applaud the hundreds of thousands to young men and women taking to the streets to oppose gun violence, especially in schools, I don't think banning guns is the answer, although I agree that the system has to often failed to do proper background checks. So instead of demanding tighter controls on gun purchases, how about enforcing the ones already on the books? Also, instead of trying to regulate what kind of firearms someone has, how about focusing on requiring gun safety training so they know how to properly use them? Besides, we all know that even if guns suddenly were outlawed tomorrow, criminals would still have them and we'd look like a flock of sheep to a bunch of hungry wolves. Of course, the government would see us the same way!

I think the solution to gun violence in schools lies much closer to home; it lays in the way they treat their fellow students. It lies in the way that bullying---physical, psychological, and cyber--- is still allowed to happen without recourse. Yes, it's "illegal" but so what? So is stealing but it happens anyway, and no amount of signs is going to change that. The worse tolerance of bullying still comes from the kids themselves who allow it among themselves. They know who is doing it, yet they say nothing and do nothing, and then pretend to be so surprised when someone commits suicide...or shoots up the school.

Sometimes a solution is so simple it's overlooked. People, usually in desperation, tend to "paint with a wide brush" when a small one would do just as well or better. Stop the bullying and intimidation in schools, especially the cyber-bullying. Don't accept cliquish behavior; don't be a part of it. Don't ignore "gangbangers". Report them. Call the police if necessary. These are the purveyors of violence in society. They have no place in school or anywhere near schools, playgrounds, parks, or kids in general.

Lastly, don't tolerate attacks on teachers by some loser of a student, and don't allow them to interrupt the class. If they don't want to learn and want to remain woefully ignorant, so be it, but let them do it elsewhere. Students have a powerful voice in stopping this behavior. Teachers and parents need to take an active interest in everyone as much as possible. Don't assume drugging your child, even if a teacher or counselor, recommends it, at least not without a second or even third opinion; and be open to alternatives.

Let's start demanding that federal, state, and local officials in charge of reviewing gun applications actually do their jobs, and that means having the resources and proper training to do their jobs. Too many of these incidents are the result of someone in the chain dropping the ball. Lastly, taking personal responsibility to ensure their firearms are properly secured. Also, let's make sure those who own firearms are properly trained in their usage, including maintaining and cleaning them as well as gun safety. I think these steps will go a long way to cutting back on gun violence, be it in the schools or in general. 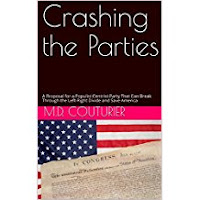 BOOK REVIEW
Crashing The Parties: A Proposal for a Populist Centrist Party That Can Break The Left-Right Divide and Save America
By M.D. Couturier

As many of you all know, one of the perks of this job is getting to review books, usually on current events, history, theology, and naturally, on politics. I've reviewed hundreds of books over the years on behalf of various publishing companies, as well as a few on my own. Some have been pretty good; a few were quite enlightening, and some not so much. Regardless, I try to make sure you get an honest assessment.

I was asked to take a look as Mr. Couturier's book, "Crashing The Parties"; a populist and centrist oriented booklet. I had the distinct advantage of long being a proponent of Centrism (and perhaps the best known Centrist activist and writer in Kentucky), so I was keenly interested in Mr. Couturier's booklet, which is only about 15 pages long. The book itself is very well written and obviously a quick read. Mr. Couturier does an excellent job in addressing a wide variety of topics in short but concise statements. The booklet starts off listing and then defining the three main tenets of American Populist Centrism, which includes the nation, the government, and the American People. He then delves into some well thought out tenants comprising his alternative to the antiquated Left/Right paradigm that we face today.

These include controversial topics such as immigration, jobs and the economy, and education. I am particularly pleased to see Mr. Couturier, a native of South Korea and now a US Citizen, address the issue of illegal immigration and once again re-embrace the concept of America as a "melting pot", and the need to make English our official national language. Mr. Couturier also addresses the need for election reform (such as ending gerrymandering) as well as national security and ending the role of permanent alliances, perpetual wars, and America as the world's policeman. He goes on to address many other hot issues, such as abortion, the role of prayer in schools, gun control, healthcare, the economy, taxes, and the need to revitalized labor unions in order to breathe life back into what's left of the middle and working classes. For all of these, Mr. Couturier should be applauded, but his treatise goes much further. I can't say that I completely agree with everything Mr. Couturier says (nor would I expect to), but he provides does provide for some well reasoned perspectives.

For anyone interested in current events from a fresh perspective, I encourage you to read Mr. Couturier's "Crashing The Parties". The read will be short, but the takeaway will be immense, especially if you're tired of the old retread ideologies of the corporate owned Democrats and Republicans or the bankrupt Left/Right paradigm. I think you will enjoy his ideas and his writing style, which are clear and to the point and more in line with the majority of Americans. I know I did.

"Crashing The Parties: A Proposal for a Populist Centrist Party That Can Break The Left-Right Divide and Save America" by M.D. Couturier is available from Goodreads and Amazon.

The Killing of Qassem Soleimani: Making the World Safer or Lighting the Fuse for WWIII?

I'll cut straight to the chase and right to the point. President Trump ordered the execution of a cold blooded terrorist. A man who was...