Here we are again. Memorial Day weekend. To many people Memorial Day signifies the end of another school year, graduations, plans for college or getting a job, sunscreen, bug spray and of course, the start of Summer along with what all that it entails. However, I think we tend to leave out one very important ingredient in all the usual festivities---those men and women who gave their all--literally---for this country. Memorial Day is, in fact, the day our nation sets aside to remember those who have fallen in service of this nation and the ideals which it stands for. As those of you who know me should already be familiar, I served in the United States Navy (often somewhat affectionately called "Uncle Sam's Yacht Club") during the mid 1970's. I am also a lifetime member of the Disabled American Veterans, and I've had the privilege to serve, both in the Navy and in the DAV, with some pretty remarkable individuals (a friend of mine describes the DAV as a club nobody wants to belong to but still needs). While serving in the Navy I got to do things I would never have imagined. I met and worked with men and women for all walks of life and from just about every single state in the nation, plus places like the Philippines, Israel, Egypt, Iran, Iraq, Qatar, Saudi Arabia, Kuwait, Germany, England, Canada, and many more. In the DAV, I've had the honor to work with some equally incredibly amazing people, including a unassuming fellow who stood guard at Spandau Prison in Post-War Germany over such individuals as Albert Speer and Rudolf Hess. He then went on to serve in Korea and in Vietnam and was gravely injured. 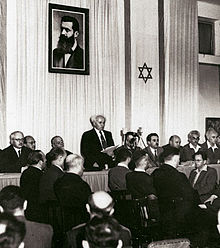 There was another individual; short in stature and as humble as they come. He was born in Hungary in the early 1930's. However by the time he was about 9 or 10, he was fighting to survive in a concentration camp called Bergen-Belsen. After the war and his liberation (and learning that none of his family had survived), he was transfer to a British internment camp on the island of Cyprus. Later, he was one of the lucky few allowed to immigrate to the British Protectorate of Palestine just in time for David Ben Gurion to declare independence from Great Britain and the establishment of the State of Israel. He went to fight in that war, and even had the opportunity to serve as a driver for, now, Prime Minister Ben Gurion. After the war, he emigrated to the US to start over. No sooner than he got himself settled in, he was drafted in to the US Army, where he served in Korea and in Vietnam, where we was severely wounded. An extraordinary life if there ever was one. There has been many others, most of whom fought in either the Korean or Vietnam wars; several in both. There military honors and ribbons they wear are impressive. However, what I've found most impressive is just how unassuming most of these men and women are. You would never suspect that the frail quiet guy in the corner took out several bunkers and saved the lives of his fellow soldiers, and in the process lost his arm. Or the woman cracking jokes was a combat nurse who was nearly blinded while she help evacuate the wounded during a mortar attack. Then there's the guy setting with some of his pals who lost part of a hand when his ship was attacked and sunk and he had to spend almost a week floating in a slowing sinking rubber raft in the blazingly hot South Pacific Ocean with no fresh water or food, and watching his fellow shipmates slip beneath the water either as a result of exhaustion, loss of hope, or sharks looking for an easy meal. I can't imagine the nightmares he must still have.

We've also have welcomed veterans of other wars and conflicts like Somalia, Lebanon, Iraq and Afghanistan. I've had the honor to meet several Purple Heart recipients. They are individuals who sustained serious wounds in a combat situation which resulted in the saving the lives of fellow Americans or our Allies. We have had members who were prisoners of war, either held by the Japanese, Germans, Italians, Chinese and North Koreans, or the North Vietnamese. However, there were two men which stood out, at in my mind. Both were about the same age, that is to say in their early 90's. Both were friendly, although one was more outgoing than the other who was a bit---shall we say---cantankerous. Perhaps curmudgeonly might express his demeanor better. Both were non-assuming in appearance, though one dressed like a typical middle class retiree and the other as someone used to working with hands and the soil (you can probably figure out which was which by now). Aside from obviously belonging to "The Greatest Generation", from the looks of them, you would think that underneath they would have little in common. However, they had one thing which bound them forever together in a unbreakable bond. Both were survivors of the Bataan Death March. For those of you unfamiliar with the Bataan Death March, let me share a few details. Shortly after the Japanese attack on Pearl Harbor, the Japanese invaded the Philippines, which was then a protectorate of the United States (the US acquired it from the Empire of Spain during the Spanish-American War of 1898). The Philippines was under the Military Governorship of General Douglas MacArthur (yes, that MacArthur). Prior to the Pearl Harbor attack, the US General Staff, headed by General George Marshall, had issued a warning to all US Army and Naval bases to be prepared for a possible attack. General MacArthur assured Washington that he was quite prepared. In reality, he wasn't. When the invasion came, US and Filipino troops took a brutal pounding. Although they were able to slow the invasion forces down, they were hopelessly outgunned and out-manned. Gradually, American and Filipino troops were driven back to the Bataan Peninsula while continuing to protect the Manila Bay Harbor as MacArthur was hustled off the island to safety. In the end, they could not stop the overwhelming superior Japanese forces. As a result, US Major General Edward King surrendered to Japanese Colonel Mootoo Nakayana of the 14th Japanese Army. The Battle of Bataan had lasted from January 7, 1942 until April 9, 1942. The Japanese rounded up the surviving military personal and marched them approximately 110 miles in temperatures up to 110 degrees with little or no water, food, rest, or medical care to POW camps. At one stop, they were herded into unvented boxcars so tightly that it was impossible to do anything but stand. If you to urinate or have a bowl movement, you had to do so right there where you were standing. Along the way, prisoners were ordered to do torturous manual work such as moving rail cars by hand, dig sewage ditches, and repairing roads. Many were ordered to strip naked and given "the sun treatment". Dysentery and disease was rampant. Anyone who stumbled, fell out, or just couldn't keep up was shot on the spot---no questions asked. There were reports on several groups of men being burned alive for no apparent reason. While no firm number is known, it's estimated that at least 20,000 men died during that march. Since the Japanese did not consider the Philippine soldiers are actual prisoners of war, their total death number will never be known. It's estimated, however, to be in the thousands (some reports put it as high as 18,000).

After the war, the overall Japanese commander responsible for the Japanese Army in the Philippines, General Masaharu Homma was charged with Crimes Against Humanity for the abuse and mistreatment of America and Filipino prisoners of war. Found guilty, he was executed by firing squad just outside of Manila on April 3, 1946. Meanwhile, despite pleas of ignorance or "just following orders, Generals Kenji Doihara, Seishiro Itagaki, Akira Muto, Iwan Matsui, Baron Koki Hirota and General/Prime Minister Hideki Tojo were all tried and found guilty by an Allied War Tribunal for the mistreatment and abuse of American and Allied prisoners of war and other Crimes Against Humanity were executed by hanging on December 23, 1948. So, as you and yours do whatever it is that you do over the Memorial Day long weekend and kick off the start of Summer, remember what this day is actually all about. Remember the men and women who have fallen in the service of this county at places such as Cold Harbor, Bull Run, Gettysburg or the Somme and Argonne, or the beaches of Normandy, Sicily, Bastogne, Saipan, Iwo Jima, Midway, Guadalcanal, as well as Seoul, Inchon, Outpost Harry, Saigon, la Drang, or Khe Sanh. More recently it has been places like the "Highway of Death", Wadi Al-Batim, Baghdad, Anwar Province, and Kandahar to name just a tiny few. It is thanks to them that America has remained safe.