Most major parties have chosen their nominees and the general public is less than thrilled about either one. In fact, the highest disapproval rating for both candidates some of the highest on record. A full 70% of registered Republicans disapprove of Donald Trump, with approximately 1/3 saying "the Donald" doesn't represent their views. Hillary Clinton is doing only slightly better, with just over 25% disapproving of the former Secretary of State and about the same about saying that she doesn't represent them. A minority of whites have a positive view of Clinton while 69% doesn't. On the other side, 94% of blacks have a negative view of Trump along with 89% of Hispanics and 88% of other non-white racial groups. For either candidate, that's pretty significant (in another poll, 38% of Democrats say they have no confidence in the Democratic Party's primary process while 44% of Republicans say the same thing about their party's primary process). However, as alluded to in my last article, Americans have more choices than these two lackluster candidates mentioned above (or the media will tell you about).

For perhaps the first time since Independent candidate Ross Perot ran in 1992, there are two strong third party candidates who have an excellent chance this go around of doing well, and who knows, perhaps beating one of the two corporate party candidates; dare I say even beating them? Perhaps the best determinant is to look at the Millennials, who are America's rising key voting bloc, replacing the ageing Baby Boomers, and were strong supporters of Bernie Sanders. According to a GenForward Poll, only 28% have a favorable opinion of either party. More than 58% say the Republican Party has no interest in them. The Democrats did slightly better with 53% saying the Democrats care about them, with the focus of their anger aimed squarely at Hillary. Although around 42% said they would support Clinton over Trump, more and more are looking elsewhere. Let's also not forget that the majority of Millennials are independent, and that number among all voters is growing. Already independents are the largest voting bloc in America, followed by Democrats and Republicans. So, without further ado, let's look at the other two contenders for President, Libertarian Party candidate Gary Johnson and Green Party nominee Jill Stein.

Gary Earl Johnson was born on January 1, 1953 in Minot, North Dakota. His father worked for the Bureau of Indian Affairs while his mother was a school teacher. Johnson was raised as a Lutheran. He attended the University of New Mexico and graduated with a BA in Political Science. It was there where he met his future wife, Denise "Dee" Simms. While attending college, Johnson worked as a door-to-door handyman. Afterwards he started his own business, "Big J Enterprises" in 1976. By the time he sold the company in 1999, it was a multimillion dollar operation with over 1000 employees and one of New Mexico's largest construction companies. Still, Johnson can almost be viewed as a pauper compared to the Trump and Clinton with an estimated net worth of "only" $10 million dollars. 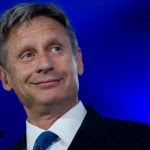 In 1994, Johnson ran on the GOP ticket for New Mexico Governor on a strong fiscally conservative, low tax, and anti-crime platform, defeating his Democrat opponent. During his tenure, he was known for his libertarian views, using a cost-benefit analysis in making his budget decisions and use of line item veto power. In his second term as Governor, Johnson concentrated on shifting Medicare recipients into managed care programs, supported school vouchers and decriminalization of marijuana. After leaving office, he founded "Our America Initiative" in 2009. The non-profit political advocacy committee focused on promoting free enterprise policies, limited government, non-intervention in foreign affairs, and government-to-business privatization efforts. Johnson describes himself as fiscally conservative and social liberal. He favors limited government, supports same-sex marriage, lower taxes, auditing the Federal Reserve, and maintaining a mandated balance budget. He also supports reducing military presence in non-hostile regions, maintaining separation of church and state, creating a strict two year path way to citizenship (starting with obtaining work permits) for illegal immigrants, and opposes gun control.

Jill Stein was born to a Reform Jewish family in Highland Park, Illinois on May 14, 1950. In 1973, she graduated magna cum laude from Harvard University, where she concentrated on anthropology, sociology, and psychology. Stein went on to study medicine at Harvard Medical School, focusing on internal medicine, and later to teaching medicine before retiring in 2006. As a physician, Stein began to take an active involvement in social activism, specifically regarding the quality of health and the local environment. She served on Boston's "Physicians for Social Responsibility" and became a leading member of Boston University's Community Outreach Core, and was the co-founder and Executive Director of the Massachusetts Coalition for Healthy Communities . Dr. Stein also served on numerous other community health oriented organizations, including several which involved recycling, reduction of coal powered emissions, developing local "green" communities, promoting healthcare facilities, reduction of toxic waste, clean water, and grassroots oriented democracy. In addition, she has written several articles improving local healthcare, reducing toxic waste and emissions, global warming, developing "green" jobs, and ways to create a healthy planet. Dr. Stein also served on the board of the "MassVoters for Fair Elections", which promoted fair elections and representation. Dr. Stein is married to Richard Rohrer, and like her, is also a physician. As for her net worth, most sources put her in the $10 million dollar range, which, like Gary Johnson, is considered almost poor compared to Trump and Hillary.

Dr. Stein has run for office a number of times, always on the Green Party ticket. This has included two attempts at governor (2002 and 2010), one run for State Representative (2004), one run for Secretary of the Commonwealth (2006), and two runs for Lexington Town Representative (2005 and 2008) in which she was successful. In the majority of the others, however, she came in third. Nevertheless, despite her losses, Stein generated some strong results at the polls in what were often crowded races.
On the issues, she favors auditing the Federal Reserve and further "democratizing" it. Like the majority of Americans, she deeply opposed the Wallstreet bailouts and has said she would not raise the debt ceiling. Dr. Stein says that she will work to promote sustainable resources, "green" jobs, renewable energy, regional based organic food systems and cooperatives, as well as reduce pollution through increasing mass transit, especially inter-city, as well as inter-city trolleys and railroads. She opposes school privatization and cancelling all school debt through what she calls "quantitative easing", which would not involve raising taxes. Furthermore, she calls for increasing the taxation on wealthy individuals to help for proposed programs. This would include an increase in taxes on stock market and real estate speculation, and offshore tax havens; calling her various proposals a "Green New Deal" after FDR's depression era "New Deal" programs. Lastly, Dr. Stein is in favor of "slavery reparations".

Dr. Stein said that she would also reduce military expenditures by 30% as well as reducing our military presence overseas and promote the National Guard as our military "centerpiece". She would continue to focus on global health related issues, including global climate changes, clean and accessible water, sustainable energy and food production. She has said we seem to invent enemies simply in order to sell military arms and supplies and implied that the US has intentionally pursued a policy to encircle Russia and supports China's claims in the South China Seas as a territorial border issue. Regarding healthcare, Dr. Stein favors repealing the Affordable Healthcare Act ("Obamacare") and implementing a single-payer healthcare program, which would be potentially cheaper and fairer to the healthcare industry, employers, and individuals. She supports a moratorium on pesticides, GMOs, and other chemicals until further testing regarding the human and environmental safety impact can be fully determined. Finally, Dr. Stein favors a "slight" reduction in space exploration while maintaining current levels of medical and scientific research.

There you have it folks. Along with Donald Trump and Hillary Clinton, these are your two other choices for president. So, who will you choose? Will you go for the lesser of the two corporate sponsored candidates or will you reach out of your preconditioned comfort zone and vote for Johnson or Stein? Some people will tell you that voting for one of the "non-approved" third party candidates is wasting your vote and your best choice is to pick one of the lesser of two evils. The Oligarchs who now rule our nation don't care so long as we follow their script and pick a "mainstream" candidate. Well, remember that the only "wasted" voted is the one you didn't cast, but also that voting for the lesser of two evils is still for evil. It's also a voted wasted because you voted for someone you really didn't want and didn't agree with. But hey, no pressure. You have three more months of this to decide.


Here's what most Americans now think of Clinton and Trump
http://www.nj.com/politics/index.ssf/2016/08/heres_what_americans_think_of_clinton_and_trump_in_poll.html


On The Issues: Gary Johnson
http://www.ontheissues.org/Gary_Johnson.htm

On The Issues: Jill Stein
http://www.ontheissues.org/Jill_Stein.htm