Everyone knows that the US has an illegal immigration problem. We've had one since at least the Ronald Reagan Presidency. Estimates range from 12 million all the way up to 20 million individuals living in this country illegally. However, no one in Washington seems to care, We used to get empty promises of a border fence; of more border patrol and ICE presence; of more severe penalties for businesses, churches and the like who willfully broke the law. Now, politicians in Washington don't even have the decency to look into the camera and openly lie to us. They simply don't care what you and I think or want. The simple matter is that their corporate masters want cheaper labor. That means that they need more workers willing to accepting low paying jobs with little or no benefits. The more potential workers, the lower wages (and benefits) go. It's basic economics 101: supply and demand.

Many labor unions support illegal immigration too, not because they necessarily care about the welfare of these individuals but because they hope these largely low or no skill workers will accept the menial low paying jobs which is mostly all the private sector unions have left to offer since many of the good paying jobs have been outsourced overseas where companies can pay employees less...much less. Nevertheless, these low skilled and often poorly educated employees with still have to pay union dues out of their meager salaries, which will bolster the faltering union treasuries. Again, basic economics.

Many low wage service jobs like those found in the fast food industry, have been demanding dramatic pay increase; from current wages just over minimum wage to new $15 dollar an hour wages. That's all well and good. I hope they get them. I really do, however, what most people tend to forget is that these jobs were created to be primarily part-time and never as jobs to solely support households, but with the exporting of the majority of manufacturing jobs overseas, these have become the "go to" jobs for the low skilled and/or low educated individual, especially for single parents.

Corporations have, of course, attempted to justify the exporting of jobs overseas as a means to compete in global markets. Corporations have long maintained that they're unable to compete against other businesses that pay employees a few dollars or even cents on the hour, and usually with no benefits (including vacations). Often employees are required to work in unsafe or unhealthy work conditions over long hours, few if any breaks, and with machinery that's unsafe. Thus it's not uncommon for employees to be injured at work due to the equipment failure and/or exhaustion. However, since many countries lack anything similar to an OSHEA and with few (if any) employee rights, they have little recourse. A few companies have even exported jobs to countries actually employ prison or child labor (which is not uncommon in the garment or shoe industries for instance).

Nevertheless, US corporations are able to ship foreign products goods back into the United States while paying little if any tariffs since they maintain a presence here in the States. As a result, not only are American companies able to reduce employee costs, as well as avoiding expenditures on proper equipment requirements or meeting proper health or safety guidelines, they can also avoid any importation penalties. As a result, many US corporations are reaping a financial windfall. Is it any wonder CEOs making on average up to 400% percent more than their average employee? The result is, as alluded to above, those seeking employment, especially those without a college or technical education, are forced to accept whatever job they can find. In addition, there are the tax breaks and taxpayer based incentives commonly known as "corporate welfare". Frankly, who can blame them for attempting to force employers to pay out more in wages? After all, it's not like you can export service jobs right? Well, perhaps. 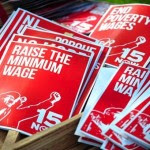 What many haven't counted on is that low wage employers do have a few recourses available. They can cut back on the number of employees they hire and require existing employees to pick up the slack, including mandatory work on the holidays, longer hours and fewer benefits (especially healthcare). Another recourse is automation. Some fast food restaurants for instance have begun experimenting with automated ordering devises that eliminates order takers (purchases are made with debit or credit cards, so there's no cash transactions). So, instead of four or five employees working the counter, maybe only one or two will be needed. In addition, owners can and most likely will raise the costs of their products a few cents. Thus while they may pay their employees more, they will be paying fewer of them while the public will have to pay more for the same items.

As a result of all this, there will be an increase in competition for the decreasing availability of jobs, and with more demand than supply, wages and/or benefits will decrease. What happens to those unable to find jobs? Many will fall through the cracks into a economic netherworld. Some will eke out a living somewhere between the murky recesses of part time jobs, the black or gray marketplace of cash only transactions or barter, a loose public safety net or maybe low level crime, while for others, especially the young, they can be sure there will always be a war or conflict somewhere for the control of resources or markets to help eliminate any "excess" population.

So what can be done? Fortunately there are options available if we have enough political will. One solution would be to impose tariffs on any imports, be it foreign or domestic. We could also eliminate any types of "corporate welfare" or taxpayer based assistance available to companies with manufacturing centers overseas who use those to ship back completed products to the US. We could also reform our labor laws to permit employees in foreign nations hired overseas by US based companies to be eligible to join US labor unions. Thus, for instances, employees of Ford in, let's say, Mexico or China, would be allowed to join the UAW. This would put them on the same footing as their domestic counterparts and create a more balanced playing field when it comes time for negotiating labor contracts (wages would, of course, be adjusted based the local economy). In addition, US companies who relocate US facilities overseas would be barred for obtaining government contracts, including their subsidiaries.

There is also the matter of illegal immigration. It's obviously going to be difficult at best to remove 12 million illegal immigrants. Building a wall, while a good (and expensive) symbolic statement will, in fact, dissuade very few individuals from crossing illegally into America. Most will simply bypass the wall and enter through other means, including tunnels or boats or find other entry points. Yes, we need to increase the ICE and border patrols agents along with giving them full authority to stop the flow using whatever means at their disposal up to and including direct confrontation. However, the only real solution will be by eliminating demand and that means strict and severe enforcement of penalties for anyone---individual, business, or religious institution---who aid or hire illegal immigrants without exception. Penalties should not be limited to just significant financial fines but also include suspending business licenses or loss of tax exempt status as well as possible imprisonment of key officers or officials for repeated offenses. Only by eliminating demand will we encourage illegal immigrants to return home. Lastly, we need to refuse the use of taxpayer based services to illegals and make English not just the "official" language of America but the only language used on government forms or other legal documents, as well as taught in US classrooms.

We also need to address our current educational standards. For instance, does every job actually require a college education? Personally, I don't think so. In fact, I would say that only a small percentage of jobs should require an applicant having a four or six year degree. In most cases, a solid high school education would be enough while for other jobs, a one or two year technical or trade school degree is more than adequate, and let's face it, not everyone is college material.

Germany, one of the world's top manufactures and known for their outstanding educational system, has a two tier system based on students academic performance, aptitude, and interests. The first track takes applicants toward "real world" jobs such as manufacturing (which also utilizes a two prong approach of academics and apprenticeship programs), the trades, or business (such as accounting, bookkeeping or sales), while the second track encourages qualified students on to higher education where they may pursue careers in law, medicine, engineering, and so forth. I should also point out that there is absolutely no stigma associated with individuals pursing the first approach since the system recognizes that each student is different, with different skills, talents, and abilities. In addition, no student is "locked in" and may pursue whichever track they're most interested in.

Of course, this type of system requires students who are dedicated and disciplined. Something which are lacking in American schools, but is still within the realm of possibility. US schools did, at one time, produce high quality students, especially in the years before the 1970's when a number of ill conceived "reforms" where introduced. If you have any doubts, feel free to check out any school book used in the 1940's, 1950's or even the 1960's for example (and remember, they didn't have computers or calculators) and see for yourself. Also, the US school system made good use of technical and trade schools which provided students with business ready skills to take them from graduation straight into the workforce without any significance additional training (and certainly with no remedial reading, grammar or math courses).

We must understand and accept that the economy is now global. Not only do companies compete on a global scale, but for a significant number of individuals, they too compete with others for jobs on a global scale. Furthermore, the United States is no longer a democratic republic. It's now a oligarchy, controlled in large part by global corporations who view nations as mere marketplaces to be exploited for their bottom line. Some see employees as necessary liabilities instead of the assets they really are. Capitalism, by its very nature, must consume and expand to survive. That's simply the nature of the beast. It has an insatiable appetite. However, if it continues to reduce wages and benefits in its pursuit of market share, it will reach the point where it's unable to sell its products because there will be too few people able to afford them. Therefore, a balance will have to be reached, and soon, which allows economies and wages to grow and expand while satisfying shareholders and consumers alike. At present, only a tiny percentage controls the overwhelming majority of the wealth, both in the United States and abroad. That leaves an underclass which will grow more restless and more desperate. And that is an dangerous combination.


The Pros and Cons of Raising the Minimum Wage
http://wheniwork.com/blog/the-pros-and-cons-of-raising-the-minimum-wage/


These CEOs Make A Lot More Money Than Their Workers
http://www.bloomberg.com/news/articles/2015-08-13/these-ceos-make-the-most-money-compared-with-their-workers


How much more do CEOs make compared to their employees?
http://www.latimes.com/business/la-fi-ceo-pay-preview-20150805-story.html