I recently received an email which attempted to make a big deal out of the fact that the number two position in the U.S. Navy is Michelle Howard. It brushed aside the fact that she the first woman to hold that post or that she was the first four star Naval Admiral. Nope, they made a big deal out of the fact that she is black, as if that in its self should have disqualified her. The article went on to claim that was appointed to her position last July by President Obama solely because of her race, not that she was a highly qualified individual. The article even claimed in its open paragraph that Admiral Howard never even served on a U.S. Naval vessel, which is highly untrue. In fact, Admiral Howard served on the USS Hunley, the USS Lexington (where she was awarded the Secretary of the Navy/Naval League Captain Winifred Collins Award for Outstanding Leadership), and then on to USS Mount Hood as the ship's Chief Engineer.

Serving in both Operation Desert Shield and Desert Storm, she was the First Lieutenant on the USS Flint before becoming the Executive Officer on board the USS Tortuga and eventually CO of LSD 47 Rushmore. Admiral Howard went to serve in various senior command positions before making the rank of Admiral and assume her present duties as Vice Chief of Naval Operations. Frankly, I don't see where either her gender nor her race has anything to do it. I'm no fan of Obama, but let's give credit where it's due. Ms. Howard is a extremely smart, well educated and highly dedicated and qualified individual.

I have to say that Ms. Howard, as impressive as her credentials are, isn't that unique. Colin Powell started off his military career as a Captain in Vietnam and rose to a four star general in the U.S. Army under President George W. Bush after serving as President Ronald Reagan's National Security Advisor and then Chairman of the Joint Chiefs of Staff during the Persian Gulf War, and finally Secretary of State. And then there's Condoleezza Rice.

Condoleezza Rice, "Condy" to those who know her, served as President George W Bush's Secretary of State, was only the second woman to serve in that role (the first was Madeline Albright). Ms Rice had previously served as President Bush's National Security Advisor, following a stint on the National Security Council under President George H.W. Bush. Ms. Rice also served as a Fellow on Public Policy at the renown Hoover Institute. And just one more thing, not only were these individuals high achievers, none of them came from "money". So what's my point? 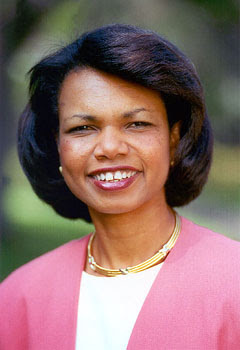 My point is this. The post I received was in relation to the riots in Baltimore and the destruction which took place in Ferguson Missouri and through innuendo, implied that blacks are "just that way"; specifically, they are destructive and always looking for handouts and trying to blame whites or Hispanics, or Asians for their troubles, which whites at least seem willing to shoulder (the new term being batted about is "White Privilege" by various race baiters). So, first off, we need to stop using the notion of race as an excuse for bad behavior and bad life decisions. Society is not responsible for someone not making the best use of the opportunities available, and the world doesn't owe you anything. Sure, life may not be perfect, but unless you were born with a gold spoon in your mouth and all the stars were correctly aligned, all I can say is "welcome to club". Each of us have "handicaps" that we have to overcome. The question is whether or not we have the willpower to do it. However, for those who think it's their race holding them back, here are a few thoughts for you (actually, this goes for just about everyone).

The first thing to do is stop hanging around with thugs and losers. This garbage about being smart or educated is "acting all white",

is so very wrong. People who tell you that are only interested in dragging you down to their level so they don't feel alone. Nobody wants to hire someone who can't speak properly, dress correctly, or act like you've don't have more than two working brain cells. These gangbangers have only two real options ahead of them---life in prison or a short quick trip to the cemetery. So what do you do? Well, stop blaming someone else for your problems. Go to school and learn everything you can. During the Summer, get a part time job. No jobs available? No problem, create your own. Look around you and see what needs to be done and then go do it. Not feeling that ambitious? Again, not a problem. Find places where you can volunteer. Maybe you can volunteer for a City Councilman or the Mayor's office, a church, or someplace like Meals on Wheels. The only person you can always count on is yourself. But let's say, you have some misplaced need to blame your troubles on whites, or Hispanics, or Asians, or whatever. Fine. Haven't you ever heard that life's best revenge is to succeed? So, go out there and make something of yourself. Prove that they were wrong about you, or better yet, prove to yourself that you were right. 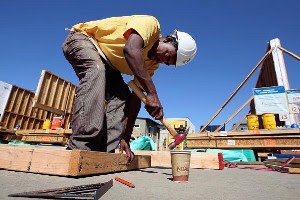 Don't want to go to college or don't think you can get in? So what. Go to a trade school. Folks in the trades can make a lot of money and you'll always have a skill, which mean you'll always have a job. And for those of you who think you're going to be the next great football, baseball, or basketball star, that's great. But remember that something on the order of 2% actually make it to the pros and stay there. I seriously think you need to consider having a realistic backup plan, and that starts with a proper education. Even if you do make it, you still need to speak properly and have critical think skills. Agreed?

There's another issue I want to address here, and that's the riots and lootings in the wake of those like Michael Brown, Freddie Gray, Eric Garner, Timar Rice, or Travon Martin. Some were just in the wrong place at the wrong time. Some were already headed down the wrong track, but none of that excuses what happened to them. Still, with the possible exceptions of Rice, who was an 11 year old child playing at a public park, where was the common sense here? Never assault or act aggressively toward a cop. Despite how they portray themselves, they're likely just a nervous as you are. Never run from a cop. They can generally run faster than you think you can, plus there's more of them and they have a whole lot more resources than you do. As scared as you may be, pay attention. Do as you're told. This is not to excuse any wrongful behavior or sweep any real or perceive biases they may or may not have under the rug. It's just a fact of life. I was stopped once by a drunk female cop who was actually on her to way to work and (apparently) was running late; she was itching for an excuse. Be calm. Keep your hands in plain sight. Be polite---no matter how much they try to provoke you (and she was trying pretty hard). Pay attention. Remember names, patrol car numbers and badge numbers if you can. Some try to film the incident. If you think you can do so safely, it's your call. If they want to bring you in---fine. Cooperate as fully as possible. No smartass comments and don't resist. It's better to get your day in court than end up in the ground.

Lastly, I wish someone would please explain to me how looting (which is nothing but unarmed robbery), burning down businesses,

trashing streets and houses, starting bonfires in the middle of the street, burning cars, and beating up people in any way honors or shows respect for those individuals who were killed. Do you seriously think Michael Brown would want you to go out and rob and burn in his name? Do you think Freddie Gray would want to see the brand new CVS Drugstore in his neighborhood robbed and then allowed to burn? It took the community years to get that store. Not only was it needed simply as a store, but look at the jobs it provided. What are those people going to do? What about burning down the senior's center which was still under construction? How did that honor Freddie? Did he hate old people? Where are these senior citizens to go now? What about the convenient store in Ferguson that was looted and torched, how did that benefit Brown or his family? What about cutting fire hoses or throwing rocks, bottles, pipes, and whatever else at the police and firefighters? How does that promote get justice? All it does it make everyone look like complete idiots who deserve whatever happens to them. And what's going to happen six months or a year from now when you or someone in your family start bemoaning about no jobs, crappy looking neighborhoods, or having to travel way out of your neighborhoods to get some from the grocery or pick up a prescription? And let's talk opportunities here too. Where are the jobs likely to go now? Not there I bet. Who in their right mind would start or relocate a business in an area with a reputation for violence; where stores get looted and/or burned down by the same people who would otherwise shop there?

As I recall, Ferguson was only recently on the upswing thanks largely to an influx of immigrants who moved in and were investing in

the area. How can they look people in the eye that stole from them and destroyed their businesses which may have represented their life's savings? How can those of Ferguson look in their eyes and ask for a job? The section of Baltimore which was destroyed was just making a comeback after previously being trashed by the riots of 1968---that's 47 years ago people. Who wants to wait another 47 years? Finally, just who should be responsible for cleaning up the destruction? Who should pick up the tab? Taxpayers? Why should they be responsible for someone else's stupidity? Frankly, it would serve folks right to have to live in the mess they created, and don't blame it on "outside" groups. It could have been stopped if people wanted it to. If those who sincerely want to have a peaceful demonstration, hold a public vigilance of some sort, then great. People can respect that, and that's a great way to bring the change that's needed to the forefront. As for the Liberal Left and the media, stop with this nambie pambie "poor babies" message. There's no excuse for this kind of behavior simply because of race. Being black or brown or any other color doesn't excuse stupid behavior. This is about knowing right from wrong and taking responsibility for your actions. If there's a lesson here, it's how to use common sense, getting a proper education, and changing things...starting with yourself and your future.