I can't say I blame those who are lured by the call of groups like ISIS. It offers hope, albeit a false one, to those who feel isolated or alienated; like giving "power to the powerless" if you'd like. A promise of strength for the weak; revenge for those who believe themselves oppressed in some way. A new or unexplored path away from familiar roads and lanes. For some, it's seen as an adventure to feed their anti-society urges. Simply put, groups like ISIS offer whatever it is that you feel you need; like a drug with a very short shelf life and an all too common bad ending. but oh that brief high!

There has always been those who sought to find answers among those who promise change amid carnage; salvation or nirvana among the corpses. It may come in the form of self-abuse, bad behavior, living in abusive relationships like with alcoholics or drug addicts (who says the "corpses" have to be someone's else's or necessarily even the physically dead?). Some have sought some sort of emotional or psychological solace by literally "sleeping with the enemy". Think of those who betrayed their families or countries and joined cults, the Nazis, the Khmer Rouge, or now, groups like ISIS or al Qaeda. 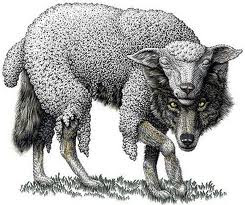 Somehow we project on upon evil those things we find within ourselves, be it how we see ourselves deep down or in our hopes or whatever. Evil has always provided a distorted mirror. It has always portrayed itself as the good. It reflects who we think we are, not what we've become. The saying that "evil triumphs when good men doing nothing" is partly true. It does. But those who undertake what they perceive as being for the good more often than not end up as the evil they sought to overcome. As my favorite philosopher, Nietzsche once remarked, "when fighting monster be careful not to become one". Be certain that our own fears don't blind us to the truth. Be certain to know what you're fighting for, and fighting to become.

Those that beckon us toward paths of divine enlightenment, however new or exciting in appearance they claim to be, are rarely so. Their paths are often well trodden and bloody and usually ends with someone falling off a cliff like a bad horror movie. Neither the divine nor enlightenment come from the barrel of a gun or out of acts of violence. They come from self-reflection, from knowledge, and most of all, from respect.

If you haven't already done so, please take a moment to vote in our poll, which you'll find in the upper right hand corner. Here at A/O, we are striving to improve your reading experience. If there's anything else you'd like to add, please feel free to do so in the comment section or you can send me a private email message. Thanks again!