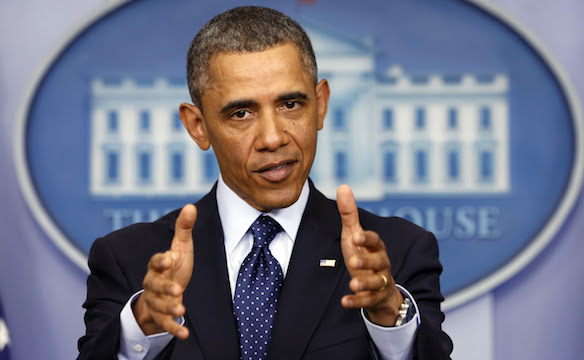 Ok, let's make this clear from the get-go. I'm not a psychologist, but I do have a pretty good understanding of human nature, and something isn't quite right here. Why is it that every time there is a crisis, Obama finds a reason to avoid serious discussion and more often than not, a reason---preferably fundraising or playing golf---to get out of town until things settle down? Obama seems unwilling or simply unable to play in the big leagues, especially in situations he helped create.

While our technology has changed down through the millennia, Man himself really hasn't changed much. The same things which motivated us 10,000 years ago still motivates us now, just as the same types of things which inspired fear, confidence, hatred, compassion, love, selfishness and all our other emotions---voluntary and involuntary---are still with us; they've been hardwired into our collective psyche since we dropped out of the trees; or arrived as a slave race for aliens; or was pieced together out of Mesopotamian mud, depending on your personal beliefs. Each of us also has a "flight or fight" gene. We can even be tested for it (I was, and not unexpectedly, I tested positive for the "fight" variant, but then again, that could just be my overabundance of Irish and Scots ancestry too).

Nevertheless, could it be that Obama has the "flight" gene and an internal need to run away when confronted from a situation beyond his control? Could this have been reinforced by his acknowledged "troubled" childhood, or even his need to overcompensate? Numerous professional book reviewers of presidential and presidential hopefuls have cited numerous inconsistencies in his books, and more than a few troubling statements about feeling socially and/or racially inferior, even in terms of his early Moslem upbringing. His professional lack of experience, either in the business arena, the military, or even in politics has left him woefully unprepared for the type of serious and often immediate decision making a president is required to make; often with inadequate or incomplete information.

We know that many of the claims made Obama's supplicants , especially regarding his academic prowess, either simply never happened or somehow, he was omitted from some of the nation's most prestigious academic records and his classmates have come down with a serious case of amnesia (or were they blinded from his brilliance?). In fact, intellectually, the guy isn't really all that sharp despite an incredible and magnetic speaking ability...with a teleprompter. But speaking, with or without a teleprompter does not an effective president make.

In an era where just about everything a potential candidate ever did, from their birth (hell, conception) to their present moment in time is analyzed and reanalyzed ad nauseam. We hear from their kindergarten teacher, earliest playmates, babysitters, coaches, friends, neighbors, tailors, until we'd rather switch channels and watch infomercials instead. We learn in minute detail about their family, their eccentric aunts and uncles, cousins, family heritage, and so forth. And yet, we know next to nothing about Obama's, and what we think we know is often full of contradiction or are simply a blank. How's that possible? Those things we do have a reasonable certainty about are, frankly, troubling, especially his participation in clearly Marxist or communist organizations, associations with black racists, or with 60's era terrorists. His own comments regarding race, particularly about whites, are especially disconcerting. It makes me think of someone who has a fragile inner sense of security---not the same as self-confidence mind you---and with it, a internalized hatred of all things which "hurt" him as a child; which causes him to feel inadequate and propelles a need to appear superior; a persecution mentality now given an opportunity for revenge. I read once where Bill Clinton had a sense of insecurity stemming with his birth and an abusive relationship with his father and the need to protect not just himself, but his mother as well. This supposedly lead to both a drive to excel and a constant need for validation, be it the cheers of the crowds or his extra martial affairs.

All of this brings me back to Barack Obama the Man. Why does he seemingly make these inflated public statements following a crisis event which often sound phony or makes promises/threats which nobody, especially the intended party, takes seriously? As President, there is much Obama can do about the illegal immigration situation for instance, and yet despite constant threats to use executive orders (his "magic pen" as he's called it), nothing happens. He knows (as does Congress) that the American People want---demand---that the southern border with Mexico be secured, militarized if necessary (in all fairness, George W Bush was keenly aware of this too and failed to act), yet not only does he not act, he's repeatedly done just about everything in his power to make the situation worse. Now, faced with a major crisis, he further refuses to take action. When he went to Texas recently, it wasn't to access the border situation, it was for another fundraiser. It's like a child who refuses to look at the mess they made as if by not acknowledging it, the mess doesn't exist. When the assault on Benghazi was underway, Obama was at fundraiser. When the US military command was a go in dispatching mass murderer Osama Ben Laden, Obama was found on the golf course. During the operation itself, some individuals in the situation room said that Obama was beside himself; second guessing himself. In dealing with situations in the Middle East, especially those involving the terrorists groups, he has continually shown himself as weak and that's usually a fatal mistake.

More recently, the military situation in Gaza and the downing of the MH17 has shown Obama again out of his depth. His statements are characterized as worthless; unbelievable. Our allies, especially Israel, have good reason not to feel confident in the Obama Administration, although I think they can completely count on the American People having their back. Meanwhile, our adversaries, or former adversaries, can barely contain their contempt for the man. I dare say that even many of our allies feel the same way. American economic and military power, along with our political prestige continues to flounder, not necessarily because we are weak economically (though we are much to debt heavy and we have all but lost our middle class while becoming officially an oligarchy whereby the government represents primarily the top 1%), and we still the best trained, equipped, and dedicated military in the world, it's because the government and its leaders (notice I didn't say "our" leaders) like the President, his Administration, and Congress are perceived globally as inept and ineffectual. As in advertising, image in politics, especially global power politics, is everything.

Obama retreats to fundraisers, golf courses, lengthy vacations, or ineffectual press conferences because they're safe. He understands them. He feels safe. He believes he can control the situation; perhaps things will sort themselves out or someone will devise a way out for him. Regardless, the distance from the "real world" and the one of illusion which he has created for himself throughout his life, is intact. The ultimate problem is that the world is spinning out of control at an unparallel rate. The world needs America despite their occasional claims to the contrary. We are not the world's policeman, but we are its best, and perhaps ultimate hope for continued survival like it or not. In the absence of our leadership, those who desire to enslave of the human mind and soul see only encouragement to crush Humanity's Will. Our adversaries will press forward with the own agendas while the shadow of tyranny will continue to stretch over and quickly darken the light of freedom which we represent. Barack Obama has serious flaws, but I'm not explicitly speaking of the man---we all have our own failings and I would be the last to cast the first stone---and historically, America has made some terrible mistakes in judgment. We're not perfect, but we try. America needs a dedicated and serious leader it can count on, and the world needs to know that we have its back. Against evil, failure is not an option.

Obama takes heat from both sides for skipping border on fundraising trip
http://www.foxnews.com/politics/2014/07/09/obama-takes-heat-from-both-sides-for-skipping-border-on-fundraising-trip/

SICK: Obama Will Do 2 Fundraisers Today After 23 Americans Die in Crash
http://conservativetribune.com/obama-fundraisers-today-after-americans-die-crash/