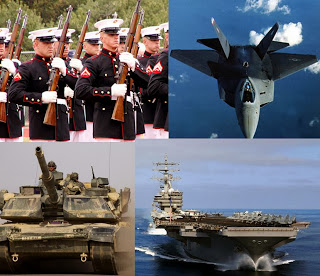 Thus far this year, the Obama Administration has fired, or "relieved" of duty nine highly senior military officers; allegedly all over ideological differences concerning military policy (a total of 197 over the last five years). This comes at a time of additional personnel reduction through budget cuts and a military drawdown in naval and troop deployments (the Army is reducing its ground strength by 80,000; the Marines by 20,000; while the Air Force reduces its air cargo fleet and the Navy will cut its fleet by 16 vessels, down to 306).

According to one retired general, former Major General Paul Vallely, the Obama Administration is getting rid of all leading officers who are either openly outspoken in opinion of current US military policy or are believed to be. According to General Vallely, Obama is intentionally weakening the ability of the US military to project American firepower by "gutting" defense programs, cutting military units, overriding command decisions (which has an obvious affect on military morale), and has shown a willingness to deny and delay at every turn (think Benghazi). You'll recall that several members of the top brass had previously leaked information to the press that the Obama Administration has been asking senior commanders is they had any qualms about disarming US citizens, up to and including firing on civilians.

Some of the key seniors officers ordered to resign have been Major General Gregg Sturdevant of the Marine Corps. He was Director of Strategic Planning and Policy for the US Pacific Command and Commander of the air wing at Camp Bastion, Afghanistan. Major General Charles Gurganus, also of the US Marines, who was regional commander and in charge of the 1 Marine Expeditionary Forces in Afghanistan. Vice Admiral Tim Giardina, US Navy. Admiral Giardina was Deputy Commander of the US Strategic Command and in charges of the Navy's nuclear missile arsenal. Major General Michael Carey of the US Air Force. He was commander of the 20th Air Force and in charge of three wings of nuclear intercontinental missiles on three bases. General Carter Ham, Commander of US African Command (and in charge of US forces in the region at the time of the Benghazi attack) and Rear Admiral Charles Gauette, the Navy Commander of Carrier Strike Group Three and the previous deputy commander of the US Naval Force, US Central Command. He too was dismissed during the Benghazi incident.
While these are just few of the overall US military command who've been fired, they do represent a partial list of the senior most officer core. One is reminded of Joseph Stalin who, prior to WWII, purged the top tier of the Russian military (including a large number of the second tier) in order to further secure his power base. However, in Stalin's case, his officer corps were either executed or sentenced to the gulags of Siberia, where most died of starvation or exposure. The result was Russia's near defeat by invading German forces in 1941. In this case, these US officers are being politically "executed" since their careers have been terminated and they face continued harassment from the White House, including possible loss of any civilian related jobs which involve federal contracts (those contracts being cancelled or suspended).

While Stalin was able to secure his position as Premier for life, Obama is not in any such position to do so under the current previsions of the Constitution limiting the president to two consecutive terms (however, this could be suspended in the event of a national emergency or martial law). Nevertheless, such loss of leading officers and their experience is a critical blow to the integrity of US military forces and the overall morale and readiness of our soldiers, sailors, and airmen. One has no alternative but to ask what the endgame is here. What is to be gained, and by who?


Obama Changes Direction of the US Military Command
http://downtrend.com/jrc410/obama-changes-direction-of-us-military-command-fires-9th-general-in-his-purge/