The COVID-19 Pandemic: The Chinese Connection

I don't know about you, but I have a lot of questions about this pandemic. There are some things which just don't add up. Perhaps you feel the same way. It seems that we're not being told the whole truth about what's going on. Maybe I'm just being a little paranoid; the result of being "grounded" by the government for too long. However, in doing some research on the virus, I came across some interesting information which I wanted to share with you.

China claims that the virus was a creation of the CIA (the perennial villain of conspiracy buffs everywhere). Somehow it was planted in Wuhan City or the Hubei province either by an agent or unwitting tourist or business person. The reason was to discredit China in response to the increasing tensions between China and the U.S. over trade issues and China's increased military presence in the China Sea and Indian Ocean.

China maintains they are merely protecting their maritime sovereignty as well as exercising their rights under international maritime laws to operate in international waters. Besides, they were just as surprised by the pandemic as anyone else but better prepared to deal with such an outbreak.

The U.S. and China have been butting heads over trade. Specifically, over opening up markets in China and maintaining price parody (China underwrites some of its industries, thus enabling them to undercut prices and create an unfair price advantage while restricting their markets to imports) as well as over issues such as safety and quality control (there has long been instances of tainted dog and baby food, toxic paint, poor quality, etc). Important issues to be sure but hardly worth risking a biological war. China has of recent been flexing its naval muscle in the region. They have enlarged their naval fleet and feel confident enough to even threaten the U.S. Navy to stay out of the China Sea, which it is now claiming as its own. However, these waters have traditionally been considered international and open, although parts of the China Sea have historically been claimed by Japan, South Korea, Indonesia, and even the Philippines. Additionally, incursions by Chinese fishing vessels in the Indian Ocean has ramped up tensions with India, who claim that these vessels are in their territorial waters.

There are also two side issues which bear mentioning as well. The first was the large and growing protests against China's perceived increasing suppression of freedoms in Hong Kong. The protesters claim that Beijing is trying to completely snuff out any democracy and bring the former British colony fully under its control. Beijing, on the other hand, insists they are only trying to bring Hong Kong in line with the rest of China and remove any "radical agents". Besides, it's an internal security matter and none of anyone's business.

The second issue is, of course, Taiwan, which Beijing claims as a rouge province. As such, they've repeated stated that they "reserve the right" to bring the island nation under the direct control of Beijing at their discretion. Taiwan has been a independent nation since 1949 when the Chinese Nationalists led by General Chiang Kai-shek fled to the island following their defeat by the Communists under Mao Zedong. Let's take this issue first.

The Communist government in Beijing has long insisted that the Taiwanese government is "illegitimate" and vowed that reunification will take place willingly or not. Efforts to isolate the country politically and economically has been part of this policy. As a result, Taiwan has maintained a strong and well trained military while trying to maintain close relationships with other nations in the region and globally. Some analysts believe that China's recent increase in its naval as well as commercial fleet has been an extension of their policy to further isolate the island nation. This, naturally, would include keeping the U.S. Navy at arm's length from the region.

Over the years there has been numerous attempts to hack America's electronic grid, including government and key commercial sites, acquire strategic technology, and finding ways to cripple our ability to react quickly to a crisis. It's thought by some that this is being done as a precursor to an invasion of Taiwan since many of these hacks are thought to have originated from a Chinese military cyber-warfare unit, PLA 61398.

The Chinese military are known to be perfecting their ability to conduct electromagnetic pulses (EMP) attacks which would severely disrupt any electronic devise from microwaves, computers, and cell phones to military hardware, aircraft, radars, telecommunications, power stations, or low orbit satellites, thus rendering a nation deaf, dumb, and blind anywhere from a few hours to weeks or more.

The protests in Hong Kong started in June of 2019. They revolved around a bill introduced in April that would allow residents to be extradited to the mainland for trial and other legal matters, Since 1997, when the British returned the colony to China, Hong Kong has been allowed a large measure of autonomy from Beijing, especially in judicial matters and a measure of democracy which includes freedom of speech and expression. However, the police and security forces follow Beijing.

Although the bill was withdrawn in September, the damage was done. Whatever trust existed between "HongKongers" as they're called and Beijing appears broken. The protests, which started small, has grown exponentially as the police became increasingly aggressive. In addition, the demands of the protestors have gone demanding the bill be scraped and no prosecution of protesters to demanding that Hong Kong be guaranteed independence and democracy.

Not surprisingly, Beijing's response was an unequivocal "no" (the exact answer from Chinese President Xi Jinping was that "bodies would be smashed and bones ground to power"). China is also experiencing increased violence in some of its western provinces, particularly in Xinjiang among the Uyghur and Hui Muslim populations. The greatest fear is the possibility of their adoption of radical Wahhabism and subsequent Jihads which have infected the Middle East, Africa, and parts of Southeast Asia.

China is under mounting pressure internally. In additions to these issues, China is facing economic problems stemming from growing the economy too quickly. The result has been a slowly declining GDP, over-development, high debt coupled with high savings and low spending and even lower industrial productive, not to mention shoddy quality. It has become less innovative and overly export dependent. It is also experiencing its own income gap, not only within the cities where many young professionals are unable to afford to live, but between the cities and interior of the country which remains rural. These new professionals are wanting more personal and economic freedom, which translates to political freedom. The result is that China, the world's most populous country, is in trouble.

It's worth noting that the Chinese military allegedly maintains a bio-lab facility in Wuhan where the virus first appeared (denied by the way) along with a civilian lab, the Wuhan Institute of Virology, had been conducting research with bats having a 96% similarly to the COVID-19 virus.

It's been speculated by the White House's Coronavirus Task Force that the virus may have managed to escape from a lab and possibly infected some animal which, in turn, infected humans. It's just as possible that the virus infected humans direct. Given China's history of poor quality control (as mentioned earlier), this wouldn't be surprising. As an interesting aside, outside of Wuhan and the Hubei province, the presence of the COVID-19 virus is virtually non-existent. As for the labs, China has been trying to increase its presence in the $1.2 trillion dollar global pharmaceutical market as well. 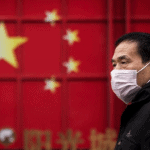 It's likely that the Chinese government was well aware of the virus long before it became public. After all, they had been quieting buying up N-95 masks and personal protection equipment for months prior to the announcement. Nevertheless, had Beijing been more forthcoming instead of trying to redirect attention elsewhere, it's possible---even likely---the world could have prepared more quickly than it did. The result would have been fewer people infected and a lot of lives saved. In this "brave new world" of globalism, playing this kind of antiquated politics is both inhumane and tantamount to an act of war. Perhaps that's part of the "missing piece" to the puzzle of what's going on.

It's also worth noting that since the outbreak of this pandemic we've heard nothing further from the Hong Kong protesters. It's almost like they never existed like the 1989 Tiananmen Square protesters isn't it? There's no doubt that with the world's attention focused on coping with the virus and nightly body counts reminiscent of the Vietnam War, China and other countries such as Iran, Chile, France, Indonesia, who were facing mounting calls for greater democracy and reform, will use the occasion to snuff out any dissent. As British Prime Minister Winston Churchill once said, "never waste a good crisis".

The issues with China are only a small part of this current global crisis. There are others; many others. The world that will come out on the other side of this pandemic will be much like it was in most ways, but very different in other ways. People will still do all the things they've always done, but we will find that are freedoms are not quite as "free" as they once were.

We will have to accept more regulation of our daily lives. Gatherings will be tightly regulated. The government will exercise its "right" to monitor or restrict our movements. Healthcare will become more controlled, perhaps it will include who gets treated and to what extent. Maybe even vaccinations will become mandatory. No proof of vaccination? No entry. No sale. Our electronic communications are already monitored and we seem to be alright with that for some reason. Will we after our smart phones go from being conveniences to our own personal jailer? Shortages will be more commonplace even though there's more than enough food and other items available.

There's no question that it will be a very different world. The question is whether it will be one constructed by the Oligarchs who want nothing less than to total control or will it be one that we make? Will we accept a world where we exist within strictly defined electronic cages? A world where there is only the ruled and the rulers, with freedom being "allowed" instead of a natural right; to be given or taken at the whelms of some technocrat?

So while we sit around in quarantine like children in timeout, give some serious thought to what kind of world do you want after you're "permitted" to go back out and earn a living (assuming you still even have a job). Which one of your Constitutional or natural rights are you willing to surrender for the government's "greater good"? How far will you allow Big Brother or bigger Big Business to control your life? It's worth thinking about, if not for you, then for your children and their children.