The Suicide of Nations

Recent events in the Middle East have resulted in the largest mass exodus of refugees since the end of World War II. The vast majority of these are Muslims from Syria. The White House announced on September 11th that the United States will take in another 10,000 over the next year. With the US limiting the number of refugees to 70,000 annually, that's still a significant number. Nevertheless, Germany has agreed to accept some 800,000 while tiny isolated Iceland has offered to take in some 100,000. The US State Department has been working the Catholic Counsel of Bishops and the Lutheran Church (which alone has settled over 7600 Somalis in Minnesota while both have become experts on immigration---legal and illegal) to resettle these individuals. States like Kentucky, Vermont, Arizona, Nebraska, Idaho, Michigan, Utah, and both North and South Dakota will get the bulk while South Carolina, Arkansas, Mississippi, West Virginia, Montana, and Wyoming will get the least. Of course, this will put increased pressure on these states, several of which that are struggling to meet current levels of need, to provide housing and employment, not to mention an additional drain on social and health services. In terms of jobs, many of these individuals are low skilled with little knowledge of English, making re-education a first priority. However, their low skill levels will also create a potential conflict with other, mostly illegal, immigrates, who are now holding many of those jobs.

In Europe, this potential for conflict has already come to a head. As I mentioned above, Germany is taking in some 800,000 of these fleeing immigrants. France has agreed to take in around 100,000 despite its already heavily Moslem immigrant population. In total, some 300,000 have already fled Syria and surrounding areas, with approximately 200,000 overwhelming the financially struggling Greece along and around 100,000 making their way into Italy. According to some sources, just over 13 million souls have been displaced in

Syria alone (Afghanistan and Eritrea round out the top three nations most impacted by the violence). Two million, mostly Syrian refugees are holed up along and just in the Turkish border.

While many are calling for a return, or at least an ouster of the refugees from their countries, the 1951 UN "Refugee Convention" requires nations to accept individuals who are fleeing countries where their lives are endangered. In addition, the EU has mandated an open immigration policy, which has already heavily burden nations like Sweden and Norway and has nearly collapsed their once highly successful democratic socialist economic systems. Nevertheless, countries like Sweden have already accepted just under 68,000 refugees (Germany has thus far taken in close to 100,000). Other countries such as Hungary and Macedonia, have closed their borders to the refugees, despite the onslaught. Thus far, the Hungarian Government has been, albeit reluctantly, allowing refugees to pass through the country as they make their way to Austria (which is accepting 80,000 refugees), Germany, and other Western European nations, including the US which has agree to accept up to 10,000. The International Rescue Committee and United Nations has expressed their dismay and anger at the United States for agree to accept 100,000; apparently without consideration of the thousands the US has already accepted and the illegal immigration crisis (unlike Europe, the US is not bound by the same laws mandating acceptance of illegal immigrants---at least not yet).

Nevertheless, things have been unraveling quickly. Refugees and immigrants have been pouring in at higher than expected rates, overwhelming relief efforts with some refugee centers running low on food, water, medicine, and tents (and this doesn't take into consideration clothing, transportation, emergency needs, or sanitation needs). In addition, thousands more from Africa having been

attempting to enter Europe through Spain and southern France. These have typically been the immigrants which have been coming for years since the EU's open door policy has been in effect and have overloaded the social safety networks in many of the host countries. The result has been Germany's efforts to "reinstate" border controls (Germany's Merkel has been urging other frontline European nations to do likewise).

It also looks like many of these refugees and migrants have brought their ethnic and religious hatreds with them. Germany, Italy, and Greece have all reported violent assaults as various opposing groups have come in contact with each other. Other countries, including France and the UK are bracing for similar violent outbreaks. There is little doubt European authorities are ill equipped to handle the level of hatred and open violence that is coming their way. Also, approximately 12 ISIS operatives have been caught crossing into some of the hosts nations so far (in one instance, the suspect was carrying dozens of fake Syrian passports). How many have crossed undetected is anybody's guess, but I think we'll soon get a good idea firsthand.

Lastly, but perhaps more significantly, the overwhelming majority of the refugees entering Europe are Moslem (as have been a significant number of the Africans mentioned earlier). Yet, the most persecuted of the all those in the Middle East has been the Coptic, Assyrian, Chaldean and Syrian Christians. These were the ones whom ISIS attempted to surround and capture as they fled into the mountains with the Kurds. Meanwhile, hundreds, if not more, have been captured, tortured, and ultimately murdered in the most gruesome ways imaginable---men, women, children (including babies), the handicapped, and seniors. Even family pets weren't spared. A few young girls and women have been sold off to become sex slaves before finally being decapitated. However, these Christians seem to be having the hardest time finding sanctuary.

Some towns and communities have expressed a willingness to accept refugees or migrant families, provided they were Christian in order to preserve their local character and culture (and some have mentioned to lessen the likelihood of terrorists).The country of Slovakia, for instance, said it would accept Christian refugees only. Cyprus too has expressed an interest in Christian only refugees. Not unexpectedly, politicians all the way around have condemned this as being "racist" or "discriminatory"; claiming that Christians aren't any less persecuted than other minorities. Hogwash. Of those few Christian families who've at least made it to the refugee camps, many are intimidated, attacked and beaten by their fellow refugees who happen also to be Moslems.

I think the Europe we've always known is vanishing before our eyes. Europe has been inundated for decades by individuals who have little or no education not to mention poor work skills. Some, however, have taken the opportunities afforded them by their hosts countries to educate themselves and learn viable employment skills. However, those have been the minority. Most seem more interested to live in their homogenous enclaves while drawing on the already strained social nets instead of trying to integrate themselves into their new homeland. The once highly successful economic systems of Scandinavia---the socialist democracies so much hated by the corporate capitalists for defying their economics of greed---are failing; not because of ideological flaws, but because these new immigrants lack the education, work skills and yes, the work ethic needed to sustain a system which requires everyone to pitch in equally in order to reap the benefits equally.

With the decline in religious observance throughout Europe and a birthrate which has been in decline since the end of the Second World War, whole sections of cities, like London, Manchester, York, Paris, Marseille, Hamburg, Dusseldorf, Solingen, and Lisbon have become unwelcoming Moslem enclaves thanks to higher than average birthrates as well as the recent immigration, where Sharia law is enforced. Even non-Moslem women simply walking through are harassed if their heads are uncovered or if they're unaccompanied by a male adult. Pets, especially dogs, are very much unwelcome ("unclean"). Government authorities pretend they maintain control, but in reality they can do little more than lodge complaints with the local ruling council. Meanwhile, churches are being converted into Mosques. Local traditions, foods, and customs are being supplanted. In Germany recently, girls have been instructed not to wear short skirts to schools as to avoid "offending" Moslem students and their parents. School curriculums are being changed to fit with acceptable classes for Moslems. Being overwhelming Christian for centuries, most European schools, hospitals, and so forth often display a Christian cross. Well, that too is changing as they are being asking to remove them. Why? I think you why.

While it's unlikely that any European nation will face a Moslem majority, they will see significant increases in Moslem populations and can expect a ramping up of demands for change as they seek to increase their economic and political influence. Smaller countries like Belgium, the Netherlands, Iceland, as well as Sweden, Norway and Denmark will likely be the most impacted. Nevertheless, the demographics will change. There will be less of the stereotypical fair skinned blond hair blue eyed Northern European or the rosie cheeked English or the freckled red-haired Scot. Even the French will see change. Gone too will much of Europe's culture and traditions I suspect, along with its scandalous "liberal" social attitudes. In place of ringing church bells there will be calls to 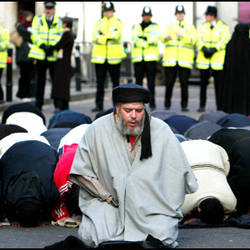 prayers from converted Cathedrals. Its economy will likely struggle along while some may fail altogether as Europe will face a steep re-education and training curve while bearing a crushing influx on its social safety net. Europe may also face a healthcare crisis as possible old diseases are re-introduced into society.

Lastly, I think Americans need to pay more attention. While much of what's happening some 5000 miles away, many of these changes will be---and are---on our shores too. We are, as the Greeks are saying, becoming an "occupied" country. We have at least 12 million illegal immigrants here; many if not most of whom having no interest whatsoever of integrating into society. This influx has and will continue to drive down wages and evaporate benefits as we cope with excess demand versus availability of jobs while higher paying jobs are exported to lower pay countries. It has already strained our social net to the max. We will see an even greater entrenchment of ethnic communities as well as an increase in racial, religious, and ethnic conflicts as centuries old hatreds are brought here and the shrinking tax dollar for social services pits one group against the other while a few attempt to goad the more successful into feeling "guilty" for grievances not of their making; assuming that it's better to live off public handouts than accept responsibility for their own lack of effort as others have, starting with taking education seriously. Meanwhile, we have a government that is no longer "ours". So perhaps we are "occupied" after all.

As Bob Dylan once sang, "you don't need a Weatherman to know which way the wind blows" and I'm feeling a chill in the air.


Why Europe's refugee crisis has reached a tipping point
http://news.yahoo.com/asylum-in-europe--the-difference-between-migrants-and-refugees-and-what-s-at-stake-183639355.html


Why is the EU struggling with migrants and asylum?
http://www.bbc.com/news/world-europe-24583286

Archbishop of Canterbury: UK plans to take in 20,000 Syrians discriminates against Christians
https://refugeeresettlementwatch.wordpress.com/category/christian-refugees/