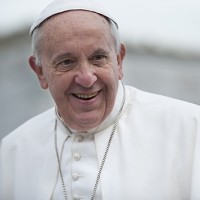 Pope Francis flew some 7000 miles to the United States to tell Americans to "welcome strangers in our midst", a reference to immigration---particularly illegal immigration--into this country. He then asked Americans to reject a "mindset of hostility". The Pontiff went on to say "...on this continent ... thousands of persons are led to travel north in search of a better life for themselves and for their loved ones, in search of greater opportunities," the Pope said. "Is this not what we want for our own children? We must not be taken aback by their numbers, but rather view them as persons, seeing their faces and listening to their stories, trying to respond as best we can to their situation. To respond in a way which is always humane, just and fraternal."

While I respect for Pope Francis for his openness and humility, which has been so often been lacking in past Popes and other religious leaders, I'm afraid he was barking up the wrong tree. America is literally a land of immigrants. Practically every population, language, and religion on the planet is represented by this country. America takes in more immigrants than any other nation and gives more in aid than any other nation. Although born in Argentina, Pope Francis seems woefully ignorant of our immigrant situation, not to mention Europe's. At present, the US has some 12 million illegal immigrants currently living in the states (some estimates push that number as high as 20 million) with thousands crossing the border daily. America has been a highly welcoming country. 38.5 million foreign born immigrants have come to this country just since 2009. Roughly half are women. Two-thirds of those have become naturalized citizens. 46.9% are Latino or Hispanic, 23.9% are Asian, while 8.2% are black or African. The remaining 17.5 are either of another race (mainly white) or are of a mixed race. So the Pope is really off base telling America to "open its arms". What the aforementioned statistics should loudly say is that America is perhaps the most accepting nation in the world. Nevertheless, we are also a nation of laws. We have borders just as every other nation does, including Vatican City. All we ask is that if you want to come here, that you do it legally. Is that so difficult to understand? Yes, America does accept immigrants from other countries who are fleeing their homeland because of some natural or manmade crisis such as war, famine, genocide or some form of violent persecution---just under 75,000 came in 2009 alone. Most of these refugees came from Cuba, the Congo, Iran, Burundi, Vietnam, and Somalia. However, few of the estimated 12 million illegal immigrants now living in this country fit that criteria. As for the Vatican City, a nation-state and seat of the Catholic Church, however, does not accept illegal immigrants or refugees. Those wishing to legally immigrant into Vatican City must first apply for special permission for residency. Most choose to settle outside the city walls (yes, I said "city walls". Vatican City is surrounded by a tall reinforced stone wall), in Rome. Although the official position of the Vatican has been that all immigrants has specific migratory rights (since humans are basically a nomadic species), the size and limited resources of Vatican City (approximately 108 square miles with roughly 10 people per square mile) make open acceptance impossible. So, if viewed more as a city-state than a nation-state, Vatican City would be comparable to many middle to small cities around the world. Yet, many of these cities have been forced into accepting immigrants and refugees. So, what's the difference?

I think the difference is multifold. First, many of the middle and small sized towns are not solely self-reliant. They get money and resources from the state and/or nation. Many are surrounded by farmland and ample useable water, plus they have an adequate infrastructure with the potential to expand. Ok, what about Vatican City? Though it's size is finite, it has more than ample financial resources thanks to its vast real estate holdings, national treasures (which are, frankly, simply priceless), and the outstanding revenue stream derived from the thousands of parishes throughout the world. If the Vatican was viewed as a corporation (which in many respects it is), it would be among the world's richest (the Vatican's bank, for instance, is estimated to have some 20 billion dollars in gold reserves on deposit just in the US alone. In addition, it receives some $850 million just from the 85 million Catholics living in North America---and there are some 2.1 billion Catholics in the world!). Another estimate claims that the Vatican's bank has some $8 billion in assets not including its various real estate holdings. Being located within Rome, there is adequate room to settle immigrants and refugees, with the permission of Rome's mayor and the Italian government, a good infrastructure as well as sufficient water and food.

So, my point here is that, as a head of state, Pope Francis could easily address the issue of immigration, either within Vatican City itself or some place within Italy or through its various global real estate holdings and, of course, where its political and religious influence allows. It would make far more sense for the Vatican to use its considerable wealth and power to promote resolutions that would allow refugees to remain or return to their home countries. As an aside, approximately 2/3 of Hispanics and Latinos are Catholic, so it obviously behooves the Pontiff to promote more immigration---legal and illegal--into the predominately Protestant United States. Just saying.

Finally, while the Pontiff, speaking at the United Nations, called on the US and other countries to be more "accepting" of immigrants, there was nothing in any of his speeches which called on immigrants to be more accepting of their chosen hosts. Nothing was mentioned about learning and using the host nation's primary language, of respecting or even adopting any of the host country's traditions and customs (not to mention other religions). Many seem to becoming only for what government handouts they get with no intent on integration. He made no appeal to the immigrants to leave behind old tribal, racial, religious or ethnic hatreds and start anew. There has already been several outbreaks of violence between various groups of immigrants in Europe. He said nothing about the newcomers cooperating with officials, avoiding violence or blending in with society. In fact, it seems that the Pope was pushing a one sided agenda; that the host nations must cower to the immigrants. That, in my opinion, was a critical mistake since while most of the nations have in fact been generous in their welcoming, it has been the immigrants who have proven to be disruptive, violent, and demanding that their host country forego their traditions---cultural and religious---in favor of theirs, and that my friends is wrong. It only sows the seeds for mistrust, prejudice, and violence. So, when handing out policy advice, how about a little less of "do as I say not as I do" ok?


Why Immigration is Different for Pope Francis
http://time.com/4046634/pope-francis-us-visit-immigration/


Frequently Requested Statistics on Immigrants and Immigration in the United States
http://www.migrationpolicy.org/article/frequently-requested-statistics-immigrants-and-immigration-united-states-1


Pro-Immigration Pope Lives in Vatican City With The Strictest Immigration Policies in the World
http://www.thegatewaypundit.com/2015/09/pro-immigration-pope-lives-in-vatican-city-with-strictest-immigration-policies-in-the-world-video/


How rich is the Vatican?
http://www.ibtimes.co.uk/how-rich-vatican-so-wealthy-it-can-stumble-across-millions-euros-just-tucked-away-1478219