Well, he did it. Obama publically announced on the evening of November 20th that he's going to grant "executive amnesty" to approximately 5 million illegal immigrants and in doing so, thumbing his nose at Congress and flipping off the majority of Americans who've steadfastly rejected any form of amnesty for those who blatantly have ignored our laws. As for the thousands who've stood in line, filled out forms, took exams, learned English, and so forth...well you can guess what he's done to them. Democrat proponents have termed this as a Obama's "Emancipation Proclamation" . This is far from a "Emancipation Proclamation”, which freed slaves (illegally as Lincoln--ironically---didn't have the legal authority) in the States which left the Union as a political and military tactic in order to force Confederate troops to leave the battlefields and return to the farm fields to tend to the crops in order to keep their families from starving. Slaves in States which had not ceded were exempt from their freedom. Instead, this executive order is a declaration of war on the Constitution; the legal process; and the American People. There's more than a bit of irony and pugnacity in that Obama will sign his executive order in Las Vegas' "Caesars Palace". By design or happenstance, it couldn't be a more fitting venue.

The American Public has been adamant in demanding that the President and/or Congress put an end to any talk of amnesty for years now, just as they've been determined to see our southern border sealed to prevent not only the flow of illegal immigrants---thousands each month---from crossing, but also terrorists, criminals, drug related gangs, and as we've already experienced, diseases which this country had conquered decades ago and now puts everyone at risk. We just recently experienced approximated 60,000 children and their "escorts" (wink wink) being abandoned on our border with the full knowledge and at least tacit support of the Mexican Government and its military; they even shot at US civilians along the border as they escorted them into US territory. The Obama Regime, as I've previously reported to you, has already surrender parts of Pinal County in Arizona to drug cartels. 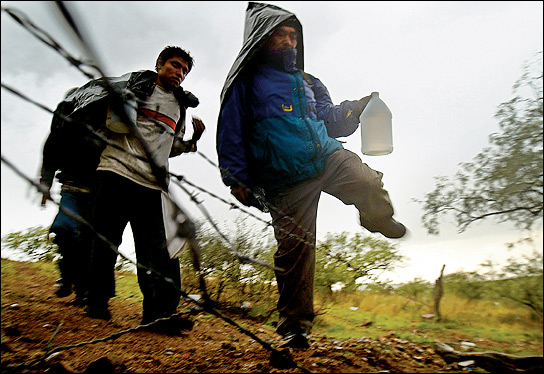 I also want to make this absolutely clear. Illegal immigration doesn't cost Obama, Congress, nor the federal, state, or local governments one thin copper filled dime. Nothing. Obama or Congress for that matter, can feel as magnanimous as they want. It's not their money. However, their "generosity" does, have a cost. Illegal immigrants cost every single taxpaying citizen in this country approximately $120,000 billion dollars of our money. According to a study done by the Heritage Foundation in 2013, the average family household of an illegal immigrants has a net deficit (benefits received from taxpayer financed programs less taxes paid) of -$14,384.00--that's how much of the tab you get to pick up. According to the study, after amnesty, tax payments would increase and benefits received would drop to a net deficit of -$11,455.00 per household. Once illegal immigrants become eligible of medical and welfare based programs, benefits received would rise to $43,000 of your tax dollars while taxes paid back into the system would only average around $16,000, or a -$23,000 of taxpayer money per household and there's around 12 million illegal immigrants. Obama's recent announcement applies to only 5 million of them.

Now, doesn't that make you feel all warm and fuzzy? And to think, you can't even write them off on your taxes as dependents! As an aside, according to the 2013 study again, amnesty would make illegal immigrants eligible for Social Security retirement benefits and Medicare, resulting in a net deficit of -$22,700 per household. Oh----I almost forgot to mention--remember those 60,000 children dumped on our border? Did you know it's going to cost you---the American Taxpayer---$760 million dollars to educate...and that may not even be in English. Feeling a little miffed yet?

In 2012, just under 41 million people living in this country were foreign born. We are, in fact, a nation of immigrants. Each of us or our ancestors came to this land for different reason--economic, political, religious, socially; some forced to come. Some came voluntarily . Between 2011 and 2013, some 447,000 individuals followed the legal process and immigrated to the US. On average, the steps to become a US Citizens can take anywhere from 6 months to a year; in a few rarer cases, a bit longer. But for those who want to make this country their home, it's worth it. So what does amnesty tell these individuals? Well, for one it tells many of them that following the legal route is a waste of time and effort. It tells them not to both with the health requirements, or learning about the history of culture of this nation, or even bothering with having adequate work or English language skills. And, the hope---even anticipation of amnesty will only encourage more individuals to come here illegally.

Amnesty tells them that obeying the law is not requirement to come to America. It also tells them and others that the American government, regardless of President or Congress or even political party matters; each are just as spineless as the other. For those seeking a democratic nation, where the People are sovereign, this isn't that place anymore. The government (and notice I didn't say "our") cares little if at all about the desires of the public. Its sole interests are protecting the economic interests of their corporate masters and gerrymandering their party (and hopefully themselves) back into office. All hail the Machine! Mussolini would be so proud.

Lastly, for those who want to point to presidents Ronald Reagan and George Bush and claim that they too granted amnesty, here's a little reminder for you. Congress proposed the Immigration Reform and Control Act or simply the Simpson-Mazzolli Act of 1986, which President Reagan signed into law as an Act of Congress on November 6, 1986, not as an executive order. This work bill included a provision to grant amnesty to some 3 million illegal immigrants provided they had been here a minimum of five years, no criminal record, a basic understanding of US history and government, and a working knowledge of English. It also made it illegal to knowingly hire individuals who were here illegally. Bush attempted to correct errors in the original bill (such as extending coverage of family members). Neither president acted by executive fiat as President Obama has. So where does that leave us? It leaves us with a President unwilling to follow the Constitution ; it's Congress who makes the laws not the President. It also leaves us with a lame duck president who couldn't care less about the will of the American People. He has two years left to leave his mark and he doesn't seem to care how that is done. Any attempt at impeachment could be easily delayed until his remaining term in office has expired. Congress doesn't get off light easily here either. Neither the House or the Senate---irrespective of their political party--- has managed to put together a realistic immigration reform package. Instead, they act like a bunch of spoilt second grade school children. They are nothing this nation should be proud of. The American People have been clear and resolute year after year in demanding immigration reform which offers a pathway to citizenship without either amnesty or allowing those here illegally to "bump ahead" those who are doing it the right way.

We have also been equally resolute in demanding that the border be firmly secured and the border patrol be given back its enforcement powers (and budget); that those arrested for being here illegally be prompted dropped off at the nearest embassy for them to deal with at their own costs; that English only be taught and used in our schools, governments, and in the use of any taxpayer paid forms; that employers who hire illegal workers be severely punished, including fines equal to 25% of the income paid per person, suspension of their business licenses ranging from 30 days to permanent. Equally severe fines should apply to those convicted of aiding those here illegally as well, including churches and non-profit groups with loss of tax-exempt status for repeated offences. And finally, those here illegally should not be entitled to any taxpayer based services. These penalties may seem harsh, but they are the same penalties that are meted out in Latin America to those there illegally or who aid those there illegally. As for Obama, his actions speak volumes in his contempt for the Constitutional process and for all Americans.

The Fiscal Burden of Illegal Immigration of US Taxpayers.
http://www.fairus.org/publications/the-fiscal-burden-of-illegal-immigration-on-u-s-taxpayers

The Fiscal Costs of Unlawful Immigrants and Amnesty to the US taxpayer
http://www.heritage.org/research/reports/2013/05/the-fiscal-cost-of-unlawful-immigrants-and-amnesty-to-the-us-taxpayer