Labor Day! Whoopee! That wonderful day created to give everyone a three day holiday from that crappie job they secretly (and sometimes not so secretly) hate. For parents everywhere, it's the "official" start of the school year and chance for some peace and quiet, not to mention actually getting something accomplished around the house. Maybe one last cookout and pool party before closing it for the year. For kids, it supposed to mark an end to summer and one last outing to the lake or beach or some overpriced theme park. It also means only 60 more days to CanDay...err...Halloween...and...hey... that means just 120 more days to Debt Day...err...Christmas, followed shortly thereafter by Remorse Eve, also known as New Year's Eve or for some, "Amateur Night", and then we get to start all over again! For many adults, Labor Day also means the end of dieting until next January and no more trying to fit into those ever shrinking swimsuits (also known as "why-bothers"---kinda like lite beer if you think about it) and finally actually getting to eat something and covering it up with sweaters and heavy coats.

Isn't that what Labor Day is supposed to be about? Just simply another date on the calendar marking another day to buy something as part of our capitalistic "cycle of life"? You know, when we're suppose to forget about the petty and trivial meaning of the day, and instead go out and spend money we don't have for...for what exactly? Frankly I'm not sure, but I imagine Hallmark has a card for it whatever it is. But since Labor Day is at hand, let's take a look at it.

Labor Day. Well, it really isn't the last day of Summer. That's actually September 21st according to the Farmer's Almanac. And the first day of school? Well, no. For most kiddos that started about a week or two ago. And is there's really some reason why, when the temperature outside is still in the 90's and most of us are walking around in shorts and sandals, that we need to see faux autumn leaves lining store aisles amid Halloween costumes on one side and Thanksgiving decorations on the other side? I even saw a Christmas ad recently. A Christmas ad! Seriously? Anyway, I digress. Sorry. I was about to start talking about Labor Day (...Christmas...geez).
Aside from sales, Labor Day is supposed to be a day for us...ordinary working men and women. While most of the world celebrates May 1st as the "International Day of Labor", Americans, always a little different, decided that the first Monday of September would be a day celebrating the American labor movement. Labor Day itself was first promoted by the Knights of Labor and the Central Labor Union following the Haymarket Massacre, which had initially begun as a protest for an eight hour work day and in reaction of the killing of several workers the day before by the local police, in Chicago on May 4, 1886. It ended with deaths of approximately 11 individuals and the wounding of around 130 others. Then President Grover Cleveland (D-NY) vetoed the idea of an official labor holiday on May 1st (socialism was very much alive and popular), and decided to go with the day put forth by the Knights of Labor. 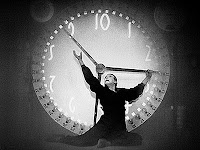 This was but one instance when the struggle for worker rights, including the 40 hour work week, safe working conditions, laws protecting child (child labor was especially notorious in Pennsylvania, West Virginia Kentucky, and other parts of Appalachia where kids as young as 9 routinely went to work in the coal mines), worker's compensation, holiday pay, a livable day's wages, equal rights, and so forth was still in its infancy. Labor, at the time, was strongly influenced by the concept of guilds brought over from Europe and was heavily promoted by various socialist groups, as well as political anarchists (especially among recent Irish, German, and Eastern European immigrants), women's rights and child welfare groups, and other similar human rights organizations. The core concept being that those who added value to businesses by the sweat of their brow were just as important as those who added capital; a concept that has not changed despite changes in technology. Remember, this was the era of the Robber Barons; of Carnegie, Mellon, Gould, Vanderbilt, Rockefeller, and later, to Ford and other industrialist. Work could be, and often was, brutal and dangerous.

by employers, safe working conditions, even offshoots like food inspection, processing, and preparation, the Civil Rights Movement, Women's Equal Voting Right, safe highways and roads, pensions, and air safety. And yes, the 40 hour work week and three day holidays like Labor Day! But we're facing other forms of worker disenfranchisement such as off shoring jobs to avoid paying decent wages and/or benefits. Some companies have laid off employees or simply opted to close. Unfair wages, with CEOs making 354% more than the average employee! According to Bloomberg, CEO salaries have increased 1000% over the pay of average workers since 1950. Even burdensome "Obamacare" instead of a single payer form of healthcare like most country's have, with the costs being transferred to individuals in the form of higher premiums or indirectly by picking up the tax.

Today, we have some unions working almost hand-in-glove with companies against the very employees they're supposed to represent; insuring workers toe the company line and keep off the strike line. Union corruption, long a problem since the 1930's, remains a problem today as some union bosses attempt to control elections; making unions virtually their own fiefdoms. Many unions bosses earn just as much as their corporate counterparts, which just isn't right. We have unions pushing for amnesty for illegal immigrants. Why? Because they expect most will join easy entry low paying mostly union jobs and that will boost the revenues in the union coffers. Outside of public sector jobs, unions are virtually non-existent in the private sector; 36.8% vs. 7.6%. In fact, the majority of union members are 45 and older--9% are at least 65--and mostly male (13.4% vs. 11.4%).

Of course with the decline of unions, beginning around 1954, the middle class has declined, which should tell you that companies don't, own their own, pay decent wages. Sill, according to a August 31, 2011 Gallup Poll, 52% of Americans support unions, though a poll taken a week later indicated that 55% believed that unions would continue to become weaker. Interestingly, 48% of Democrats thought unions would become weaker while 58% of Republicans and 57% of Independents did. Not surprisingly, 78% of Democrats supported unions while only 28% of Republicans did. 52% of Independents supported unions as well. 42% of Americans would like to see unions have a lesser role, while 30% wanted a great influence and 25% was happy where it is. 69% of Republicans would like to see unions have less influence compared to 42% of Independents while on the other hand only 45% of Democrats wanted unions to have a stronger influence. Interesting, especially when one considers the overall opinions of the public's opinion of the two main political parties has continued to plummet; the majority of people are now Independents---approximately 45% (the GOP had 23% and the Democrats had 29%. However, 40% leaned Republican while 42% leaned Democrat). In fact, in a October 2013 Gallup Poll, 60% of those surveyed said we needed a third party! Astonishingly, 81% of your fellow Americans rarely or never trust the federal government according to Gallup.

So, what does this all mean? Well, it means we're all grateful for everything organized labor has done for us, but we don't appear to confident that unions can do anything else, and at the same time, we're far less confident in government and in the two political parties can produce positive changes. As a whole, we're basically liberal leaning. Perhaps what's needed is a union based political party like most democratic countries have, or even better, independent pro-labor candidates. Recently, 12 independent unions candidates won local elections in upper state Ohio; something the status quo corporate media didn't widely report. Geez, I wonder why? So, while we munch down on those hotdogs and chips and pondering the extinction of the Middle Class; our declining economic wellbeing; or the latest sale at some discounter, be sure to give a kind word of "thanks" to any union folks you know or come across while you're out shopping. Overall, Labor has proven to be Americas best bargain.