At present there appears to be approximately 250 ongoing protests in 110 countries over government imposed restrictions pertaining to various issues, from strikes over austerity to economic cutbacks to anti-corruption to  calls for democracy . 78% of these are aimed at authoritarian or authoritarian leaning governments.

Of these 250 protests, which involve hundreds of thousands of people (if not millions) worldwide. 25 of these protests are directly related to anti-Covid mandates, which range from mandatory masking, lockdowns, quarantines, employment restrictions, and vaccinations. In many cases, the anti-mandates protests are accompanied by protests against other restrictions to human freedom.

In Belgium, the people are protesting rules on mandatory masking at locations where "Covid Passes" are already required.  "Covid Passes" have become common in most of Europe. They provide documentation that the holder has been vaccinated. Those who are unvaccinated and/or don't have a Covid Pass are prohibited from entry into restaurants or other public locations.

In the Netherlands the protests concern mandatory lockdowns. Unlike Belgium, the protests in the Netherlands have become increasingly violent with shots being fired and fires started in the middle of the street. Many of protestors are seen waving "Gadsden flags" and carrying banner reading "Resistance" and "Freedom".

France is facing similar problems, especially on the island territory of Guadeloupe, where there have been previous protests over the Covid Passes and lockdowns. As in the Netherlands, there has also been gunshots aimed at the police. Austria, the UK, and Italy, countries outside of Europe such as Argentina, New Zealand, Australia, Brazil, Croatia, the Czech Republic, Israel, and about a dozen others  have been dealing with similar problems, which also stem from quarantines, lockdowns, and Covid Passes. In short, people are demanding liberty.

Germany had the largest mass protest in its history---and estimated 188,000 people turned out to demonstrate against enforced masks, vaccinations, lockdowns, Covid Passes, and "vax-to-work" requirements. What's even more interesting is that the protests brought together those on Germany's extreme Left and on its Far Right, uniting them on at least this one issue.

Since the Covid measures started almost three years ago, there have been at least 1046 protests throughout German towns and cities.  If there's one thing Germans know, its tyranny and its impact on individual rights.

The mainstream media tries to create the picture of an unpopular protest (trying to tie it to Far Right and hate groups, including the use of the Gadsden, Nazi, and Confederate flags and pro-Trump signs), and yet upwards of over 800 trucks plus hundreds of other vehicles are involved (some estimates have put that number to around 50,000 or more).

When Canadian Prime Minister Trudeau issued a National State of Emergency and ordered citizens to stay home. Instead thousands came out in support. They lined the route to the national capital in Ottawa. They joined the truckers in Ottawa and on the Ambassador Bridge on the Canadian-U.S. border between Detroit and Windsor, Ontario.

When the police ordered Canadian citizens not to fuel the trucks or face possible arrest, fines, or jail, thousands showed up with gas cans. When a judge shut down a "Go Fund Me" account in support of the truckers, other sites sprung up immediately.  Canadians authorities are now threatening to forcefully remove protestor's semi trucks as well as the protestors themselves. I don't think that's a smart idea.

Meanwhile, there is a rising concern over the lack of shipment coming into the U.S., which could have a added negative effect on the economy given the already severe backlog of unloaded ships at U.S. ports due to Covid restrictions. In some places, store shelves are already sparse and the country is increasingly in the grip of a rising inflation.

The continued scarcity will only make things worse by driving up prices.  Truckers are the backbone of not just the American economy, but pretty much the economy of every industrial society on the planet. Without truckers, very little gets delivered, be it food, medicine, clothes, or whatever.

So what's fired up the normally docile and overly polite Canadians? Pretty much the same as everyone else. The truckers were ordered to get vaccinated or face suspension, fines, or loss of the job, particularly if their load crosses into the U.S.. The protest was organized by Tamara Lich, the secretary of the relatively new conservative leaning Maverick Party which supports greater autonomy for Western Canada (perhaps that's the reason for the media's link to neo-Nazis and such). However, the truckers insist that they are grown ass men and women and they can make their own informed decisions. You know, pretty much like everybody else.

As an aside, Ms. Lich and others leaders of the Freedom Convoy were arrested in the wee morning hours of February 18th. At the time, Ms. Lich was simply standing out front of a building in downtown Ottawa talking with supporters.  Her arrest fueled rumors that the police, under orders from Trudeau, were planning on taking some sort of aggressive action (the following morning, the police, some on mounted horses), arrested about 100 individuals and began forcefully moving trucks, which is only the beginning.
It should be noted that the protesters have been very peaceful and orderly to date. Residents in Ottawa also received a notice on their front porches that morning advising them that any violent behavior wouldn't be tolerated.

After all this time and the peaceful nature of the protest, why would anyone assume there would suddenly be violence unless the police were planning on doing something violent and they want residents to stay away? Trudeau also threatened truckers with a loss of their commercial licenses if they didn't leave now. Trudeau is showing himself to be a petty tinpot tyrant and incapable of handling a peaceful and legal protest. Obviously he lacks the backbone and insight to lead to Canada.

In addition, the trucker protest has sparked fears here in the States as smaller protests seem to be forming ad hoc. There's currently a trucker convoy, which originated in San Diego, headed along the southern coastal highway headed up to Washington D.C. or the 100+ cowboys (yes, cowboys) on horseback the "Freedom Convoy" from the American side of the border, not to mention similar protests popping up in places like New Zealand and the Netherlands. 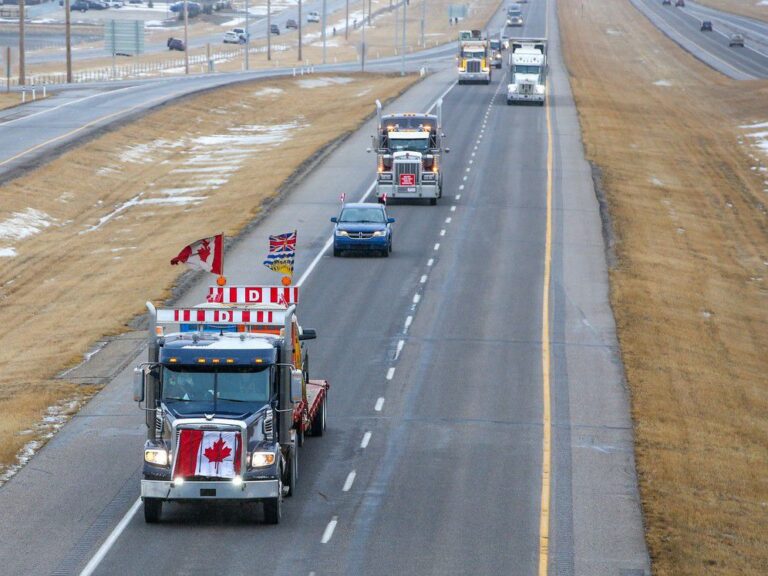 Nevertheless, the Canadian trucker "Freedom Convoy" isn't getting a great deal of press, at least not on television in the States, and certainly not anything positive. Even coming up with pictures for this article is difficult). The same goes for the other anti-mandate protests taking place around the world. What coverage there is presents the protestors as something most aren't, namely extremist, uncaring, or racist (tell that to the Hispanic, Asian, or black truckers and protestors).

Counter protestors have started showing up using not just the usual signs, bull horns, and throwing of trash (among other things), they are also blaring a pretty vulgar "porno-metal" "gay cowboy" song to disrupt or shut down anti-mandate channels.  Meanwhile, the mainstream media continues to report that the anti-mandate convoy is in "chaos" and has become "disorganized" and is "falling apart"; something that the organizers and those on the scene deny. Why the disparity of observations?

I think it's because the protests themselves doesn't present the government, be it the U.S., Canadian, or any of the other governments, in a particular good light. The reality is open challenge to the government's authority. It shows the people are rejecting government dictates as we have the right to do. They are rejecting "We-Say-So" herd mentality in favor of informed individuality.

If people want to mask up or vaccinate, then do it by all means. It's your right to, but don't try to impose it on everyone else. It's a short step from mandates vaccines to "everyone's good" to imposing mandatory religious beliefs, social values, or political ideology. That's not what democracy is all about. At least I hope not.

While the government can and should make recommendations, especially when it comes to public health, it is "We The People" who have the absolute final say. We, as individuals, assume the risk and responsibility either way. The government works for us, not the other way around.

If you want to know more, please take a look at the links below. If you enjoyed the article, please consider passing along to others and don't forget to subscribe. It's free! Lastly please be sure to ""like" us on Facebook or whatever platform you use to read A/O. It helps with the algorithms and keeps our articles in circulation.

250,000 trucks are participating in the "Freedom Convoy" in Canada

Europe's COVID mandate protests are getting big and violent