Is America Headed For A Divorce? Why Our Loss of Trust in the Government Could Lead To A Breakup

Americans no longer trust their government. According to recent Pew poll, just 20% of those surveyed said they trusted the government to do the right thing. That means that 80% of America has little or no confidence in Washington. As bad as that is, a mere 2% said they had complete trust in the government!

In the rest of the world, those kind of numbers would have officials scurrying to the airport for the next flight out to just about anywhere. Those numbers are typically surefire harbingers that a revolution or coup is imminent. You could probably smell the tar coming to a boil and hear the scaffolding being built.

Some politicians thought one was getting underway on January 6th as they locked doors and hide under their desks (and no doubt, at least one grabbing the closest bottle of booze they could find to ease their nerves. I bet that even the ghost of Edward Kennedy was downing shots!). The truth is that something much worse may in the offering.

Americans are more divided than at any time since the 1850's and the "Great Compromise", which briefly held the nation together thanks to the efforts and genius of the "Great Triumvirate"  that was John C Calhoun, Henry Clay, and Daniel Webster. Unfortunately for our nation at this time, there isn't a Calhoun, Clay, or Webster. It seems that Americans can't agree on anything.

A recent poll by Pew pointed out that 73% of Democrats and Republicans believe that we can't even come together and agree on "basic facts". However, it hasn't always been so. Trust in the government was actually in the upper 70% range under Eisenhower, Kennedy, and Johnson's first term. The last time there was an approval plurality was in 1970, under President Richard Nixon, when public trust of government stood at 52%. But that was pre-Watergate days.

Following Nixon's fall, the numbers began a drop from which they've never recovered, though we've briefly come close such as during George W Bush in October 2001 when it reached 60% before declining to 25% by the end of his presidency. Obama peaked at 29% in February 2011, then dropped to 10% in October of the same year. 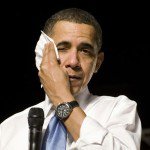 Of course, partisanship plays a big factor too. Republicans naturally have more trust under a Republican administration while Democrats do the same under a Democrat administration. The real deciding factor are Independents, who are America's voting majority. Other factors come into play, like race, ethnicity, and age.

In terms of age, we look at generational groupings. Only 17% of Gen Z and 19% of Millennials have any confidence in government. 21% of Gen X and 25% of the Silent generations do. Meanwhile, Baby Boomers have the highest amount of trust with 28%. It's worth noting that of these groups, regardless of race or age, none do better than just over a 1/3 when it comes to confidence in the government. That means around 2/3 have little or no faith in the government.

As an aside, a 2020 poll by Gallup also showed that the majority of Americans do not have faith in the government when it comes to domestic or foreign policy. The polls shows an approval of 41% on domestic issues and a 48% in international ones, which underscores the poll by Pew.

The Gallup poll also included a few other results which I found interesting, partly because it separated Independents out from the two corporate controlled parties, which it should since Independents are not just a separate voter demographic, but also the nation's largest which Pew doesn't, but also because of the questions themselves.

When it came to trusting the American People, 63% of Independents did. So did 62% of Republicans, but, while still a majority, only 57% of Democrats agreed. In what was the most telling of the questions, when it came to trusting the corporate media, almost two thirds (73%) of Democrats said they did. Compare that to 36% of Independents and a mere 10% of Republicans! Could that be because most Republicans believe the corporate media is biased toward the Left?

When it comes to issues such as gun control, taxes, immigration (especially illegal immigration), not to mention the COVID virus or vaccination, Americans are further divided not just along political lines, but even along religious beliefs, gender, and regional lines. We seem unable to find a compromise or common cause. Americans, simply put, don't trust in the government, and its lost faith in pretty every other institution up and including religion. 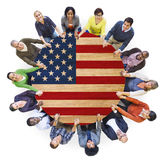 America used to be a melting pot. People came from all over the world, bringing with them their culture, language, traditions, dress, music, food, and so forth. However, everyone came here for the single purpose of becoming an "American". That was their highest aspiration. As such, they merged with other immigrants, while leaving behind the petty squabbles, hatreds, and restrictions of the Old Country. Here it was possible to remake yourself and become almost anything you wanted if you were willing to work hard enough for it.  This was the land of second chances and opportunities.

However, over time, those aspirations had to be tempered with reality. Starting in the late 1960's, the concept of a melting pot began to change. Immigrants were encouraged to come, but not to blend in. Increasingly they were no longer encouraged to adopt our traditions, values, political system, or even speak the language. They came, not to be "Americans", but simply for jobs; to create little ethnic or religious enclaves throughout the country. America started becoming a defacto balkanized nation.

Employers defy immigration and other laws by hiring illegal immigrants, often forcing them to work for next to nothing, no benefits, or in unsanitary or unsafe conditions. Simultaneously, corporations offshored not just jobs, but entire companies to second or third world countries where people work in sweatshops for pennies a day with no benefits and poor work conditions.

Meanwhile, the middle class, the economic and social backbone of this country, has taxed and outsourced into virtual nonexistence. The middle class is essentially seen as the upper tier of the working poor. While the upper elites see their wealth grow, the rest continue to see theirs shrink. The top 10% own 73% of all wealth, compared with the bottom 60% which owns just 4.2%. 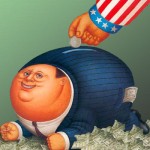 21% of all children in America live in poverty, which is higher than any other industrialized nation. Education in America also continues to decline in comparison with other countries, particularly in the areas of math and science. In terms of healthcare, we are rank toward the bottom of all industrial nations, especially in the number of available hospital beds and doctor/patient ratio.

America has become a two tier nation. We have one set of laws for the elites and another set for the rest of us. Politicians serve virtually at will thanks to Citizens United, gerrymandering, and rigged elections. They have benefits that we could only dream of. When they choose to leave office, they take not only those benefits with them, but also their salary...for life.

Over 50% go on to become lobbyists, where they earn triple when they made in office (not to mention perks of their own). Those who don't become lobbyists, usually become paid "consultants" or "advisors". Some make a fortune as commentators on TV or on the book and lecture circuit.

They all typically live in gated communities, protected by cameras, motion sensors, and security guards. They don't worry about crime. They don't concern themselves with having to choose between buying medicine, paying bills, or buying groceries like the majority of Americans do. Face it folks, we live in two very different Americas. 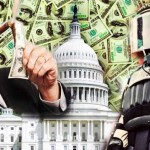 America is a Corporatocracy. It is governed by a very wealthy oligarchy. This is no America on the road to "socialism" unless you mean Corporate socialism or socialism for the very rich and powerful.  A Corporatocracy is, by their very nature, a form of fascism. The creator of modern fascism, Benito Mussolini even said so. He stated  "Fascism should more appropriately be called Corporatism because it is a merger of state and corporate power". Pretty well sums it up don't you think? By the way, the term "socialism", which is often (and falsely) equated with Nazism or Communism, is now used as a scare word to keep people away from the idea of taking wealth and power back from the elites.

Finally, one last survey. This one is from June 2021 by the YouGov/Bright Line Watch. The survey is about support for some sort of secession. It shows that 39% of those on the West Coast favor a secession. Broken down by political ideology, 47% of Democrats, 33% of Independents, and 27% of Republicans support the idea. 32% of those in the Central Western States, which includes Idaho, Arizona and New Mexico, Colorado, Nevada, Nebraska among others, support secession.  By registration, it's 43% of Republicans, 35% of Independents, and 17% of Democrats.

In the Midwest, which includes the Dakotas, Iowa, Missouri, Michigan, Wisconsin, Indiana, Illinois, Ohio, and West Virginia, the percentage is 30%. Broken down by registration, 43% Independent, 34% Republican, and 19% Democrat support secession.

In the South, which takes in the Old Confederacy, including Kentucky, Texas, and Florida, 44% support secession. That's 66% of Republicans, 50% of Independents, and 20% of Democrats. Lastly, the Northeast, which includes New York all the way up to Maine and the Eastern Seaboard. 34% would like to leave too. Here, it's 39% of Democrats, 35% of Independents, and 26% of Republicans. 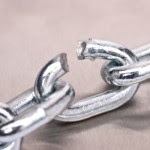 There is no question that America has embarked down a dark slippery path. Where it will lead, nobody can say. We can only hope for the best. But with the rise of China, as well as India economically, the potential debasement of the U.S. Dollar in favor of, perhaps, the Yuan, the instability of the EU, growing confidence of Russia, not to mention the influx of illegal immigrants, stress on our social safety net, vulnerability of our electrical grid and crumbling infrastructure, viruses like COVID and questionable vaccines, crime and manufactured social instability, the rise in poverty and homelessness, a non-representing government, I wouldn't bank on it. Want to know more? Check out the links below.

Income Inequality in the United States

Support for Secession Dramatically Rises in the U.S.Including on the West Coast Poll Finds