Another Shooting, Another Plea to Surrender Our Guns Another mass shooting. Another speech by a president determined to blame the guns. And more media speculation. yes, I suppose we could blame the guns. We could ignore the responsibility of the individual who loaded the gun and pulled the trigger. We could sweep under the rug their mental illness, perhaps resulting from watching too much violence on TV or at the movies or animated realism of video games. Perhaps this would be so much easier. Perhaps too this is more than the random murder of sons, daughters, moms, dads, friends and so forth. Maybe we should see these as attacks on society itself; an assault on our ideals of liberty. It would certainly be so much easier to ban guns, except that most of the mass killings occur in "gun free" zones; places where the perpetrator feels safe to hunt their prey. President Obama said in his initial speech that "facts show fewer killings where there is greater gun safety". Perhaps, but he forgot to mention places like Chicago (294), Detroit (163), Baltimore (215), Milwaukee (104) or East St. Louis (136) are places which have strong gun safety laws yet lead the nation in murders. I'm sure this little fact was "mistakenly" left out by the President's media handlers in their haste to prepare a statement.

The reality, I think, is that guns are a part of our culture in a way they never were in Europe or Asia where only a few actually owned a weapon, and then, it was mostly used for hunting. True, we could surrender our guns as President Obama and some of those on the Left suggest, but in doing so, we would also be surrendering part of our liberty; not just our right to defend ourselves and our family from all the crazies and crooks out there or our right to protect our property, or even shooting the occasional rabbit or deer or empty beer can. No, what we would be surrounding is our ability to defend ourselves from a hostile government; a tyranny of the kind our forefathers experienced and warned us about. You see, the government in Washington is not "our" government, and certainly it's not the government envisioned by Adams, Jefferson, or Washington. For that matter, it's not even the kind hoped for Patrick, Revere, or Franklin. The government in Washington is bought and paid for by a corporate oligarchy. 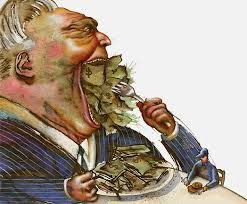 Remember the "Citizens United" misruling by the Supreme Court a few years ago? It said corporations were not just "people" like you and I, but something more. The ruling equated money with free speech, except we are limited in that freedom while this legalistic "Frankenstein" is not. It can spread its "free speech" wherever and to whomever its likes without limit. Wars are started for economic control, though the government tries to sell us on "freedom" since few would fight and die for someone else's profit margin. Thanks to 9/11, we now have the perfect war---the never-ending "war on terror"---where the enemy is everywhere and nowhere all at the same time. But most importantly, the enemy is whomever the government says it is. Wouldn't Joe McCarthy be so proud? To "protect" us, we are patted down at airports, electronically monitored and watched 24/7/365 by cameras, drones, and satellites. Every conversation or word typed is recorded and analyzed. Our finances are tracked. Our medical records are reviewed, not just for health reasons, but as potential profitability units. Even our cars and cell phones keep track of us. All that's missing is a chip implanted in our arms to complete our "protection". Meanwhile, the oligarchs are busy condemning all that they fear, often beginning with democratic socialism since it has no use for wage inequality, massive income gaps, unequal taxation, wars for profit, Wall Street or corporate bailouts, a surveillance society, or even the oligarchs themselves. The same can be said of certain republics where individual liberties are valued most of all---like the kind we used to have. These, therefore, must be vilified as "enemies of all freedom loving people" in the name of conformity. After all, some are more "equal" than others. It is indeed a "new world", but I'm not too sure just yet about how "brave" it is. Thus far, I see mostly willful ignorance and complacency.

Perhaps we do need to reexamine our gun laws. We already require mandatory registration, background checks, waiting periods, restrictions on types and amounts of ammunition we can buy. We already prohibit certain types of guns and where we can buy them, and those gun free zones have been working so well as eluded to above. Of course, in several instances it has been individuals with guns who have stopped these wackos from taking more lives; individuals with conceal and carry permits along with those who are former military for instance. These are the good guys the media doesn't talk a lot about; some have given their own lives to protect others.

Of course, many of those calling for ordinary citizens to surrender their guns are protected by individuals who carry guns. Ironic isn't it? Nevertheless, maybe we should do a better job with the background checks by expanding them to include mental health. Yes, there may be a potential privacy issue, but what's privacy now anyway but a quaint notion? And if simple conformation of treatment for mental illness without revealing its nature could save lives (including possibly the patient and potential gun purchaser), wouldn't it be worth it? I think mandatory gun safety courses should be required too---the toe you save might be your own!

We should also make all crimes which involve the use of a weapon, be it a gun, knife, or stick, be treated as a felony (with no possibility of parole in the event of death during the commission of crime involving a weapon). No this won't stop violent crime, but it may serve as a deterrent for at least a few. Lastly, we should never attempt to remove guns from society. Criminals would not only find a way to get a gun, but their potential victims would be like fish and all the world their barrel. Who do you think would be safer, a woman walking to her car alone at night or a woman carrying a gun, which she had been train to use, walking to her car alone at night? And try as they might, the understaffed, under budgeted and underpaid police usually arrive on the scene to late for anything except cleanup. We should do away with "gun free zones" in some instances, which are seen simply as easy hunting grounds for criminals, though for the seriously mental ill or those with a cause, nowhere would be entirely safe. However, few gun toting criminals or zealots wants to tangle with anyone who may shoot back! Finally, until Americans can obtain a government they can completely trust, they should never forego their right and duty to defend their liberties and, if necessary, remove that government if all else fails.