I believe in giving credit where credit is due. Recently, I was sent a link by a reader to our town's newspaper and an "endorsement" interview for the office of school board. What was unique was the fact the interview was filmed and posted on the newspaper's website, under it's "Opinion" section, and what's more, the narrator conducting the interview provided the name of everyone present, including those on the Editorial Board. Now, why that may not sound like a big deal, it is, in fact, quite a big deal for us. For as long as I can remember, the Editorial Board, until recently, rarely, if ever filmed the interview process and posted it, and heaven forbid, provided the names of the interviewers present.

Since 2004, I've been on a campaign regarding the endorsement of candidates by the media. As some of you know, I've been active in politics for well over 35 years, and over the years I've heard numerous stories about the interview process. Many cited it as biased or unfair or outright lies. Personally, I just thought they were just mad because they didn't get the endorsement; "sour grapes" as they say. However, it wasn't until I first ran for office that I learned firsthand what they meant. Not only were my comments misconstrued, some taken out of context. Take for instance one question concerned drainage, a major issue in my part of the county. I was asked what I would do about overflows and flooding. Not only did I provide a very detailed answer based on my interviews with key country sewer and drainage supervisors, I suggested that after the election, those of us elected to represent this part of the county should form a mini-caucus to examine long term approaches to fix the drainage and subsequent flooding matter once and for all. In their endorsement, the Editorial Board took my statement out of context and then accused me of trying to "balkanize" the Metro Council! Oh, and my opponent, who had little knowledge the extent of the drainage issue, suggested digging deeper ditches!

Another key issue at the time was the Fairness Ordinance which related to non-discrimination regarding sexual orientation. I strongly supported it, as did the Editorial Board, while my opponent didn't, and while I was constantly under attack by his supporters, that issue was never addressed by the Editorial Board. Meanwhile, additional comments on other various issues were misattributed, and although my knowledge on other topics exceeded that of anyone in the room that day, I didn't get their endorsement (fortunately, however, the Fairness Ordnance passed). Naturally, I wasn't too bothered. Given the newspaper's lack of popularity, especially in my part of the county, not getting their "endorsement" has usually been considered a blessing. What disturbed me the most, however, were the misquotes, omissions, and failure of the Editorial Board to even mention who was present; something I thought the public was entitled to know. Apparently, some of those grapes weren't as sour as I had originally thought.

When I ran for office a few years later, I wasn't even interviewed; never questioned once about my position on the issues while my opponent, a long time incumbent with something of a declining and lackluster record, was automatically endorsed, and again, without further explanation to the public! Now, up until then, and before I was a candidate, my "Letters to the Editor" were routinely published. It got to the point where I sometimes was even given the byline and had a section all my own, complete with an illustration! Not bad. But, after I started questioning the endorsement process all that stopped. All of my "Letters to the Editor" were ignored. My posts online were deleted almost as quickly as I posted them. I became a persona non grata as far as they were concerned. I guess I was supposed to simply disappear like everyone who had publically complained had before. Of course, I didn't thanks to you dear readers, and that was the start of Another Opinion.

You see, what I was questioning wasn't whether this or that candidate should be endorsed, but whether a newspaper should be endorsing anyone. To me, it was the role of the media to provide the public with balanced and impartial news. What we didn't need was a newspaper trying to manipulate public opinion and force their agenda on them, whether that agenda was Liberal or Conservative, which they appeared to be doing as I saw it. What I believed, and still do, is that newspapers, which are the only news oriented medium which "endorses" candidates, should provide the public with basic information about each candidate; their position on key issues in their own words; how to contact them, and then back off and let the public decide for themselves who to vote for. It is my opinion that we don't need to be told what to think or how to vote. Besides, how would feel about Fox, ABC, CBS, or even CNN endorsing candidates based on their board of director's political agenda? Not particularly happy I bet. That's not the role I want to see for the media, be it print or electronic.

Therefore, I began my campaign to end endorsements by the media, in particular newspapers---a self-appointed role they took upon themselves as "the public's protector" well before there was a literate or connected America and long before the days of radio, TV, the Internet, or alternative media and other means to obtain information. Just provide the public with a balanced picture and let them make up their own minds. Barring that, what We the Public deserved was to see the interview process unedited. Let us see and hear from the candidates themselves. Secondly, tell us who was present. Who are the individuals "judging" the candidates allegedly on our behalf; what are their names and what are their roles at the newspaper? Lastly, in partisan elections, the public deserves to know the political affiliation of those individuals. If only Democrats were being "endorsed" was that because those making that decision Democrats too? To do otherwise is complete dishonesty in my opinion. 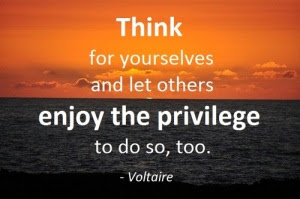 You see, what I've been after is nothing less than fairness of and honesty in the "endorsement" process itself. We are going to the polls to choose individuals who will represent us; who will make decisions regarding our jobs, our schools, our roads, our police; our taxes, our social safety net, and in some cases, whether or not to send our husbands, wives, sons or daughters off to war. I am not asking much, but what I am asking for we deserve to know. If you agree that as voters, we deserve to see the interviews with the candidates unedited; to know the names of those allegedly "judging" the candidates on our behalf; and lastly, to know what vested political interest they have in making their recommendations, or better yet, to simply give us the basic facts and allow us make up of own minds, then please contact the editorial boards of your local newspaper or other media outlets if they make "endorsements" and demand it. Otherwise, perhaps it's time we start looking for endorsements from ESPN. At least it would be more entertaining!

First, I want to thank all our many readers around the world for their years of loyality. Without you, A/O would have never have become as successfull as it has. To reflect our success and growth of Another Opinion, I am pleased to tell you that A/O is now officially incorporated! Yelp, we're all legal now, which will allow us to further expand into different avenues. And to reflect, I want you to know that we will continue to provide you with the balanced and honest content you've come to expect from Another Opinion. We will continue to remain a Centrist non-partisan blog, which remains ranked among the top 25 in the US, and we promise to provide you with the same top notch bookreviews, guest articles, and polls that we always have. So, thank you ever so much our dear readers for making this possible.