Election Day will soon be upon us. I don't know if it's just me or not, but some of the TV and radio commercials (and more than a few of the mailers) seem to keep hitting new lows and I'm getting tired of it . I don't know how they do it but each election cycles they seem to find new ways sling dirt. I heard a radio spot about a friend of mine a few days ago. By the time the ad was over and they were back to my favorite classic rock tunes, I was ready to tar and feather the guy! Of course, I knew none of the comments made by the announcer with the faux Southern sounding voice were true, despite all the "we" and "us" inserted in the commercial to make it sound like he was some work buddy divulging secret insider information. I heard several more similar commercials on the way back to the house. That night I noticed just how many TV commercials had a similar vein. If these individuals were somehow single handedly stifling social security or were secret in cahoots with business to destroy unions or export my job or cut my salary and/or benefits or supporting illegal immigration or making shady financial deals while the economy went down the tubes or some other nefarious scheme, how, I wondered, had they managed to avoid prison time or getting the sweet bejeezus beat out of them each time they stepped out of the house? Heck, I half expected to hear next that they kick puppies or throw rocks at the squirrels the low life bastards!

The truth, of course, is that most of what you see and hear is mostly made up. It's part fact, carefully cherry picked and phrased to sound as bad as it possibly can, combined with some outright fiction as part of the set up. If we're lucky enough to either read about it on a mailer or see it on television, it may include some grainy distorted black and white picture of the intended target taken out of context; all, of course, to create the most negative impression possible. Somewhere, Joseph Goebbels has to be grinning all over himself.

Now before we go off on the individual's opponent, we need to give a pause here. Some of mailers and ads do indeed come from the

opposing camp. However, more and more come from outside groups---mostly based in Washington and support some cause or another that the intended "victim" may or may not even agree with. The fact is that either their party's so-called "leadership" or it principal financial backers oppose it is what matters here. In speaking with several candidates on both sides, most didn't even know about the "hit pieces" being put out against their opponents, which, if you think about it, is a shame.

No one wants to have their name, or that of their family or friends, dragged through the mud. I know of no one who wants to hear their loved ones berated so brutally and so publically, especially when they know it's not true. But when the hit piece isn't coming from the opponent or even someone local, but from a some organization created especially for this election cycle and hundreds or even thousands of mile away with no real knowledge of the candidates involved or the local issues at stakes, it makes you mad. Some will tell you it's the nature of politics today. And I suppose that's true. To hear candidates actually discuss the issues in a factual "adult" manner is almost unheard of, and let's be honest, a civil discourse doesn't generate ratings and that's what the media is all about. If there's isn't something which can be twisted or exploited, then it's likely to generate little or any coverage.

Have you ever tried to watch some of the talking heads on "news" shows, like the kind you see on Fox, CNN, or MSNBC? They actually encourage everyone to talk over the other person as if there's no one else there. Now, I understand TV time is limited and it's tough to get your message out in the 1 or 2 minutes allotted, but if that's the case why not either allot more time for the guest to speak or restrict response times? Ask a question and give each individual so many seconds to respond and cut off their mike---and make sure they know it! If they're setting together, lay down the rules about professionalism and common decorum, and if they won't follow them, ask them to leave on camera and don't invite them back. Nothing like a little public embarrassment to get their attention. You know, I may not agree with your position and as hard as it is to imagine, you may not agree with mine, but I will at least have the courtesy and professionalism to listen to your argument. Who knows, we each might learn something new! Refusing to listen and talking over each other will not solve this nation's problems. 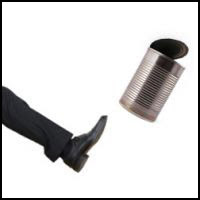 I can certainly say that while my core values have rarely changed over the years (and it would take some strong evidence to do so), my opinion on issues have. Things change. New facts emerge. We acquire new experiences. We intellectually evolve. I would never dream of voting for someone who tells me they've never changed their stance on issues. That tells me this person is intellectually isolated; they're not growing as a person and I don't want that kind of individual representing me. I want someone who sees things as they are now, not what they once were. I don't think we need someone in office who is determined to hold onto the past. I want someone who understands the past and has the ability to draw lessons from it. Equally important, I want someone with critical thinking skills; someone who understands what's happening now and can make projections about the future. Too often we see politicians who act completely surprised when something we all see to know blows up in their collective faces.

Perhaps it's because they are conditioned to think short term. After all, we've become a instant gratification society---we want whatever it is we want now. We've seem to have lost patience with ourselves or the ability to savor the moment. With politicians, they are always thinking about the next election cycle; always trying to find ways to kick the problems down the road; to deflect the issue so that someone else has to take the responsibility (and the blame). The trouble is that we've done that for so long there are no "easy" problems left.

It's that kind of thinking which has put us in the political and economic situation we're in now. Maybe it's time we starting taking time to demand politicians focus on the core reasons for the problems rather than the quick and dirty band-aid approach. I'll leave you with a quote from Buddha on that point. Once one of his disciples was wanting to do something very important to them, but kept putting it off and putting it off time and again. Finally, one day, they died and the task of such importance for so long was never completed. When asked by his other disciples what they meant, Buddha replied, "The trouble is that you think you have time". Don't let that be us dear readers.


Poll Results are In!

First, I want to thank everyone who took time to answer our three brief questions. The purpose of the questions was ensure that A/O remained on track with providing you all with the type of articles you are most interested in. So, without further ado, here's the results.

On the question as to the length of the articles, no one said they wanted one single long article. 7% of you said you'd like a single short article. 38% said they'd like a couple short articles. However, the big winner with 53% of the vote, said to mix it up.
Regarding topics, taxes was the least most requested subject with 38% of the vote. We had a three way tie for second with global, illegal immigration, and constitutional issues each getting 46% of the vote. We had a tie for first place---national and social commentary, each with 61% (multiple selections were allowed).

Lastly, you were asked to share your political leanings. 1% said they were politically Left while 9% said they leaned Left. 18% considered themselves moderate or centrist. 9% leaned to the Right, while the majority---54%---identified as Right.

Thanks so much everyone for voting. Please sure to go to the polls on Tuesday, November 4th and cast your vote as well! Remember----America and your community are counting on you!