The Polarization of Politics and Sports

Gwen Berry, the hammer throwing Olympian hopeful, recently drew some unwelcome attention to herself at the Tokyo Olympics trials in Eugene Washington, aside from her third place finish.

During the playing of the National Anthem, the Missouri native turned her back on the flag, covered her head with a black "Activist Athlete"  shirt and display what can only be term as a "pissed off" expression and matching body language. Meanwhile, her two fellow athletes displayed a much more appropriate decorum which one expects from professional athletes.

This isn't the first time Ms. Berry displayed a lack of professionalism. In the 2019 Pan American Games, Ms. Berry, who had won a gold medal, displayed a "Black Power" raised fist during the playing of the anthem reminisce of gold medal winner Tommie Smith and the bronze medal winner, John Carlos, at the 1968 Olympic Games in Mexico City (they each wore a black and black socks to signify  black power and black poverty).

According to Ms. Berry, the National Anthem contains references to slavery. In addition, she insisted that she wasn't there to represent America, but to represent "those who died due to systematic racism" (and here I thought it was an honor and privilege to go to the Olympics to represent your country. Silly me).

There have been similar protests over the years, when athletes made political statements. Perhaps the most famous of all was Spartacus, the Thracian gladiator, who led a revolt against actual cruelty and dehumanization of Rome's economic and slave systems. Leading just 80 fellow gladiators, his ranks soon swelled to thousands as runaway slaves and those from Rome's lower class joined his cause.

For three years, they gave Rome all it could handle before finally being defeated by generals Pompey the Great and Crassus, the richest man in Rome. The survivors, an estimated 6000, were crucified along the Appian Way to the gates of Rome itself. For those who witnessed Rome's retribution, it must have overwhelmed the senses--the sight, sounds, and smell of the dead, dying, and those soon to be joining them.   Never again was there a revolt like this in Rome's history.

In more recent times, the great baseball player, Jackie Robinson, said, shortly before his death in 1972, that he could not bring himself to stand and sing the National Anthem as he had 20 years earlier; this, after becoming the first professional black player in Major League Baseball.

During his ten year career, Jackie Robinson won the "Rookie of the Year Award" in 1947; was "All Star" from 1949 to 1954; won the "Most Valuable Player Award" in 1949; played in six World Series games, and contributed to the Brooklyn Dodger's World Series win in 1955. Despite all this, Jackie Robinson felt that he was only accepted so long as he won, otherwise, he was just a "Negro athlete". As an aside, it's worth nothing that Jackie Robinson also served in the U.S. Army during WWII as a Second Lieutenant.

Another black athlete of that time, Jesse Owens, won gold at the 1936 Berlin Olympics, competing not just against the world's best, but against Hitler's so-called superior "Aryan" super athletes.  Owens, who won four gold medals, felt that he was better treated by some of his competitors than by his fellow athletes and coaches. Even the accommodations for Owns and  teammate, Cornelius Johnson (also black) were equal to that of every other athlete competing.

The German shoe company, Adi Dassler (which became Addis) provided Owens and Johnson with special track and field shoes which enhanced his performance on the field. Leni Riefenstahl, the German actress, producer, and director, made sure Owens was included in her award winning film, "Olympiad" (Riefenstahl was also an impressive athlete herself).

It's worth noting that Owens disapproved of Tommie Smith's and John Carlos' "Black Power" salute. He said "the black fist is a meaningless symbol. When you open it, you have nothing but weak, empty fingers. The only time the black fist has significance is when there's money inside. That's where the power lies".  Owens also said that the Olympics was a break from war and should be above politics.

Boxing great, Joe Louis (aka "The Brown Bomber"), achieved hero worship status across racial lines, not just nationally, but globally, when he knocked out Germany's Max Schmeling in his second fight with the German legend in 1938. He was also key to integrating professional golf in 1952. Louis won 66 of his 69 fights; 52 of those by knockout. Impressive by any measure.

In 1934, he won the National Golden Gloves, the Chicago Golden Gloves, and U.S. National Championship. Not bad considering that his parents, both sharecroppers, were children of former slaves (his mother was also half Cherokee). Louis, who was born in rural Alabama, was also one of eight children and suffered from a speech impediment. As an aside, his father was committed to mental institution when Joe was just two years old.

Never known to back down from a fight, Joe Louis volunteer for the Army at the outset of WWII along with another boxing great, "Sugar Ray" Robinson. Instead, of being sent into combat, both were assigned to the Special Services Division (which also included a number of movies stars, celebrities, and performers like Glenn Miller and Mickey Rooney ) to help with the war effort by encouraging enlistment (especially among the black community) and buying war bonds. During his stent, he travelled over 22,000 miles and put on 96 boxing exhibitions. In 1945, he was awarded the Legion of Merit.

Louis never approved of politics of any sort in sports. When he died in 1981, President Ronald Reagan said "Joe Louis was more than a sports legend---his career was an indictment of racial bigotry and a source of pride and inspiration to millions of white and black people around the world".  In fact, his former opponent, Max Schmeling, not only served as a pallbearers, he also paid for Louis' funeral.

San Francisco quarterback Colin Kaepernick won distain and condemnation from fans when he introduced kneeling during the playing of the National Anthem, which ultimately spread to many of teams (in a few instances, even coaches participated). As a result, teams, the NFL, and television networks lost millions in ticket sales, merchandising, and viewership as fans boycotted the games.

Starting in 2016, Kaepernick remained seated during the National Anthem to protest what he saw as "racial injustice" and "systematic racial oppression". To cut financial losses, Kaepernick was let go by the 49ers, and despite rumors of a return, remains unsigned (don't feel too sad for him. As of 2021, he was estimated to have a net worth of $20 million dollars according to the site "Celebrity Net Worth").

Nevertheless, his protest spread to colleges, high schools, and "Pop" Warner league sports. In some instances, the playing of the national Anthem was suspended, which often led to impromptu singing of anthem by fans in attendance. As expected, attendance at games declined as did participation, and donations from sponsors, alumni, and parents.

However, none stand out any more than the self proclaimed "Greatest of All Time", Muhammad Ali (born Cassius Clay); better known at the time as "the Mouth from the South". Ali's fame (or notoriety) outside the ring came when in 1966 when he announced that he refused to be drafted (and, presumably, sent to Vietnam, though not necessarily), citing his religious beliefs and moral conviction. 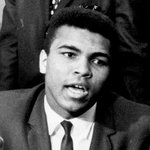 Ali proclaimed himself a "conscientious objector", yet his explanation, belying a racial undertone, when he said "Man, I ain't got no quarrel with them Viet Cong". He added "Why should they ask me to put on a uniform and go ten thousand miles from home and drop bombs and bullets on brown people in Vietnam while so-called Negro people in Louisville are treated like dogs and denied simple human rights?".
There are stories about whether Cassius Clay, which was as Ali's birth name, tossing his Olympic gold medal, which he had just won in Rome, into the Ohio River over a alleged racial incident shortly after he returned home in 1960. As one story goes, Clay wanted to make a point, so he walked into a unnamed "white only restaurant", proudly wearing his gold medal, and asked to be served.
Given the "Jim Crow" laws of the time, he was refused and asked to leave. Angry, he walked over to the Second Street Bridge and threw the medal into the river. The stories surrounding what actually happened have changed over the years, with Ali even admitting at one point that he simply lost it during a move. The Olympic Committee later replaced the gold medal in 1996.

Though he would go on to win titles and become a legend in not just boxing, but in sports in general, was considered an "Ambassador to the World" and a Humanitarian. The black community saw in Ali a thorn to the "white establishment".  Many saw him as a "black man" willing to fight for what he believed, especially when it came to race and equality while others (including veteran minorities) expressed disappointment, citing his unwillingness to fight for a country which had given him much. Like him or hate him, Ali had the class and professionalism to keep his politics out of the sport he loved.

Balancing political expression and sports is a delicate matter. Corporations often pay these celebrity athletes many times more than they receive from their inflated multi-million dollars contracts. However, these same corporations, as well as players, their teams, and the league they play for can take a serious financial hit when these same athletes make unpopular political statements or get in trouble with the law.

Nevertheless, most Americans have no problem with athletes making political statements, even ones they disagree with. However, they need to do it on their own time, not the fans. People attend or tune in to sporting events for the enjoyment of the sport, not to be lectured or watch a political commercial on their time. If athletes want to be political, do it during the off season or before game or after game day.

Ms. Berry was there to proved she was among the best America had to offer and to represent this country.  She was not there to air her political laundry to the world, nor to take attention away from the success of her teammates, DeAnna Price and Brooke Anderson, who won gold and silver respectively. This is twice she has done this. She knew better, and thus needs to be replaced.  If athletes want to be activists, then do it on their own time, not ours.

U.S. Olympian Turns Away From Flag, Covers her Head duringAnthem

Gwen Berry responds to critics of her flag protest: "I never said I hated the country"