Kamala Harris: A Lady in Waiting...for the Presidency?

Well, it's official. Kamala Harris is Joe Biden's pick for Vice President should he win the election in November. Of course, this should come as no surprise to readers of Another Opinion. Back on April 11th ("Sanders' Supporters get "Berned" and "Sleepy Joe" Looks for a Running Mate") I reviewed ole Joe's top ten choices based on his own criteria that his running mate would need to be a woman and "someone of color'. Although there were a number of decent choices, the one which stood out was Kamala Harris. Apparently Joe agreed.

So, what do we know about Ms. Harris? Back in April, I pointed out that Ms Harris was 55 years old. A lawyer, the former California Attorney General, and 27th District Attorney for San Francisco. The junior Senator (elected in 2017) represents Oakland and is a both a protégé and good friend of senior Senator and former San Francisco mayor, Diane Feinstein, as well as the current Speaker of the House, Nancy Pelosi, who also hails from the Bay Area. She also has a good background in foreign policy.

In addition, Ms. Harris is known as a capable debater and isn't afraid to mix it up. As I stated back in April, Kamala Harris has moxie. There are also the intangibles. She looks good on camera and comes across as personable, though I wouldn't say she has the charisma of Bill Clinton or a Ronald Reagan. Nevertheless, she has all qualities that Joe Biden lacks which is going to be important in what will be likely be an all out slugfest against the incumbents, President Trump and Vice President Pence.

We also need go ahead and say it---Joe Biden has serious health issues. I think it's unlikely that he will survive a term as president. In all likelihood, Biden will either be forced to step down or will die in office. I don't say this lightly or to be partisan in any way. Anyone who has watched Biden over the last year or two can see an man who is obviously having mental issues (by the that I mean the ability to focus as well as memory). Physically he looks weak; like someone who is easily fatigued. 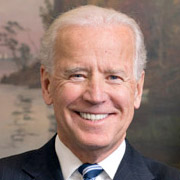 Former White House physician, Dr. David Scheiner, has stated that the nearly 80 year old Biden isn't a healthy guy too. He has high cholesterol, which could affect his blood pressure, an irregular heartbeat, and a history of aneurysms. As Dr. Scheiner has said, Joe Biden is a good candidate for a stroke.

Given the pressures of being president, those odds increase dramatically (we've all seen how the presidency ages people just who are younger and better shape, physically and mentally). So, the hard cold reality is that Biden's choice of Vice President takes on more significance than usual. With that in mind, we need to take a closer look at Ms. Harris.

Kamala Devi Harris was born on October 20, 1964 in Oakland California ("Devi" is Sanskrit for "goddess"). Her mother, Shyamaia Gopalan, was from Tamil Nadu India. She was a doctor of endocrinology and specialized in breast cancer research and treatment. She died in 2009 of colon cancer.

Her father is British Jamaican born Donald J. Harris, an economics professor emeritus at Stanford University who specializes in Post-Keynesian Developmental Economics. For those of you without an economics background, this is a branch of economics originally developed by famed British economist, Dr. John Maynard Keynes in 1936. It's reference to "Post-Keynesian" refers to its more progressive approach regarding income distribution, interest rates and its effect on employment with respect, in this case, to developing economies such as found in the Third World. If it sounds "Left leaning" it's because that at its core it is.

Dr. Harris, who is bi-racial, was born St. Ann's Bay Jamaica. He obtained his Bachelor of Arts degree from the University of London and his doctorate in 1966 at UC Berkeley. In keeping with the typical career of an academic, Dr. Harris has taught at a number of schools around the country as well as the West Indies. He was a Fulbright Scholar in Brazil (1990 and 1991) and in Mexico (1992).

Dr. Harris and Dr. Gopalan meet as students at UC Berkeley where both were student activists involved with the civil rights movement. They were married in 1963 and subsequently divorced in 1971. Both of Kamala's parents are naturalized citizens. For what it's worth, Dr. Harris has publicly stated that some of his ancestors owned large tracts of land and were slave owners.

According to Kamala, both her and her younger sister, Maya, grew up attending a black Baptist Church and a Hindu Temple in keeping with the traditions of both parents. Kamala attended the predominantly black private college, Howard University in Washington DC, where she obtained a BA in Political Science and Economics.

Harris interned for Senator Alan Cranston (D), served on the school debate team, actively demonstrated against South African apartheid on campus, and was a member of the first ever all black Greek sorority, Alpha Kappa Alpha. She obtained her law degree from the University of California Hastings School of Law in San Francisco in 1989 and passed the bar the following year. 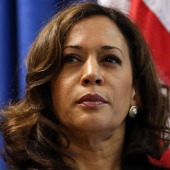 That same year, Harris was hired as a Deputy District Attorney for Alameda County. In 1994, she was appointed to the California Unemployment Insurance Appeals Board and the California Medical Assistance Commission by her then boyfriend and California Assembly Speaker, Willy Brown (D).

1998 was a big year for Ms. Harris. It seemed to mark the turning point in her burgeoning political career. That year she was hired as the Assistant San Francisco District Attorney and became the Chief of the Criminal Division where she and her team of five attorneys prosecuted major crimes including homicide, robbery, burglary, and sexual assault cases. Two years later she was hired to work for the City Attorney's office where she oversaw the Family and Children's Services Division where she represented in child abuse and neglect cases.

In 2003, Kamala Harris became California's "first woman of color" to be elected as District Attorney where she earned a reputation for being tough on crime. When she took over the office, the felony conviction rate was just 50%. By 2009, it stood at 76%. Drug dealer convections rose from 56% to 76%. When it came to violent crimes, she achieved a conviction rate of 87% for murder and 90% for felony gun violations. While she was able to reduce gang violence and truancy within her district, Harris went on record to state that she didn't support the death penalty.

In 2011, Harris took another step up the political ladder when she was elected State Attorney General, a position she held until 2017 when she was elected to the U.S. Senate. During her term as AG, she pursued a number of popular issues such as reducing the state's truancy, prison reform, created a Mortgage Fraud Strike Force, helped introduce a Homeowner's Bill of Rights, required software and technology companies to amend their agreements to provide full disclosure of the use of private information, and requiring companies, such as banks, rent-to-own companies and others to provide full disclosure of contract terms (such as undisclosed late fees, penalties for early payoff, and monitoring remotely keystrokes and built in cameras).

Ms. Harris also credited with championing a wide array of public safety and privacy as well as environmental measures while cracking down on sex crimes, especially against minors, and on the drug cartels which have invaded California and the U.S. Southwest. Overall, her tenure as State Attorney General was seen as a positive one for the general public.

After California's Barbara Boxer (D) decided to hang it up in 2016 after 24 years in the U.S. Senate, Harris was the first to throw her hat in the ring. She won a highly competitive election against several veteran politicians. However, Harris was able to secure the support of a number of key power brokers, and won all but four counties with nearly 60% of the vote.

On a personal note, Kamala married Doug Emhoff, an entertainment law attorney, in 2014. Emhoff, who is Jewish, was born in Brooklyn New York in 1964. He and his family moved to California when he was 17. He attended California State University at Northridge and the USC Gould School of Law. Kamala is a step mother to two children from Emhoff's previous marriage. Kamala and Doug have an estimated personnel net worth of $5.8 million.

As for Kamala's sister, Maya, she's also an lawyer as well as a public policy advocate, and a hired political analyst for MSMBC. She was one of three senior public policy advisors for Hillary Clinton's failed 2016 presidential campaign. Maya previously served as the Executive Director for the ACLU of Northern California and as Senior Associate of PolicyLink, which is a "research and action" institute focusing on low income communities of color.

Given Kamala's professional and academic track record, you can see why I thought she would be picked by Joe Biden as his running mate. The other nine contenders simply couldn't hold a match to Kamala's credentials. Throughout her career she has been described as "smart as a whip", "determined", "dedicated" and "loyal" , which is rare in politics.

Her top financial backers include unions, gay and lesbian groups, law firms, the entertainment industry, plus various real estate and telecommunications groups. She doesn't get much PAC money but what she does get comes primarily from women's issues and human rights groups, liberal Democrat and pro-choice organizations. Approximately 52.4% of her donors are women and most of it comes from in-state. However, she get a fair of money from out-of-state donors too, particularly New York, Massachusetts, Florida, Pennsylvania, Washington State, Georgia, and Illinois. As an aside, during her short lived run for the Democrat Presidential nomination, the majority of her donors were billionaires.

Since her election to the Senate in 2017 she has shown herself to be a dyed-in-the-wool Democrat who supports every Democrat measure coming down the line. If you're a hardcore partisan, I guess that's a good thing, but partisanship is not what we need today. We need to find ways which bring us together across party lines (especially since both parties, which are corporate owned, are dying), race, gender and whatever else. I hope she can do that, especially given the strong probability that she'll end up at the helm should Biden win in November.