Where Does American Stand On The World's Freedom Index? The State of American Freedom Pt 1 of 3 of Our "Where America Ranks" Series Did you watch President's Trump's State of Union address? I watched most of it (including the Pelosi sideshow going on behind the President). I took particular note of how often Trump made reference to America being "great", which has been a central theme of his since the campaign. That made me wonder---just how "great" is America really? As most Americans already know, the United States is an Oligarchy; ruled (as opposed to governed) by a relatively small number of elites. Of course, these same elites and a few others, dominate the rest of the globe, or at least most of it. So, how does the US stack up in terms of overall freedom, income equality and social mobility, and finally, in terms of the quality of our education system? This article will be part one of a three part series which will examine those issues.

The first topic we'll look at is freedom. After all, the notion of "freedom" has been this country's mantra practically since its founding. It's why people from around the world want to come here. But just how "free" are we actually? We already know that the US has become essentially a surveillance state since 9/11, be it government agencies or corporations (as an Oligarchy, the two work in tandem anyway). As I wrote in my last article, the US has adopted a "enhanced" driver's license, which acts as a defacto national ID card, complete with a tracking chip and facial ID capability.

Our cell phones and social media monitors and records us, builds profiles of sites we visit, where we shop and purchased, not to mention even tracks us, and even anticipates our likes. Some people like that. Personally, I find it a little scary. It's too much private information in the hands of other people and computers. Our credit cards are chipped and so are our cars and trucks. Some people have watches which double not just as a time piece but also as cell phone, internet access point, and, of course, a monitoring devise. But these are more incidentals; reflections on the state of our personal freedom amid ever growing technology. What I want to know is how we ranked in terms of our basic freedoms.

One of the most important freedoms that American has been a free press, as covered under the First Amendment along with free speech and freedom of association. According to Reporters Without Borders, they researched the openness, independence, accurately, and self-censorship of the media. Out of 180 countries, the US is now ranked in the 45th spot, dropping two spots since Trump was elected President. This partly the result of a not so subtle propaganda war again the Trump White House and the proliferation of what's often called "fax news".

So, if the US is in 45th place, who came in first for the most honest, accurate, and fair media? That went to Norway, followed by Sweden in second place. Russia was ranked as 148th while China was 176th. In last place was North Korea. No big surprise there! According to the Human Freedom Index, which was compiled by the Cato and Frasier institutes, in terms of personal freedom, economic freedom, and amount of tax and regulations, the US is ranked in the 17th sport; a drop from its usual third place spot. Pretty sad for a country which prides itself as being the "Leader of the Free World" don't you think? The drop started around the time of Bill Clinton, and has continued to decline through the presidencies of George W Bush and Barack Obama, and now, into President Trump's administration.

The top spots went to Switzerland, Hong Kong, New Zealand, Ireland, and Australia. As an aside, Hong Kong was ranked number one in terms of economic freedom and second in personal freedom. In addition, Hong Kong was the top ranked place for innovation, be it technology, business, or government. At the bottom of the list was, starting at 155th place, Egypt, Yemen, Libya, Venezuela, and Syria. Venezuela, prior to Hugo Chavez, was ranked as the wealthiest country in Latin America and one of the most economic and personally freest countries. However, since the adoption of a Marxist version of Socialism, it's economic, social, and political systems has been in a free fall, making it one of the worse countries in the world to live in.

According to the website, Traveller, which is a travel site that rates the best countries and places to visit, the United States ranks 25th in personal freedom. The information came from The "Legatum Prosperity Index for 2018", which looks at a variety of factors such as crime, business environment, health, personal freedom, environment, among other factors. The report listed the US as first in terms of business environment and sixth in social capital. However, we ranked poorly in terms of governance (19th), economic quality (13th), personal freedom and natural environment (23rd each), health (35th), safety and security (43rd). In terms of education, we only made it to the 9th spot.

The top ranked countries (in order) was Luxembourg, Canada, New Zealand, Iceland, Ireland, Uruguay, Netherlands, Finland, Belgium, and Portugal. Also included among the top twenty were all the Scandinavian countries, Slovenia, Australia, Malta, the UK, Costa Rica and Spain. The least most tolerant countries included most of Africa and the Middle East (excluding Israel), along with Iran in the 5th spot, Russia in 9th place, Iraq in at 11th and China at 12th. However, according to the report, coming in first place as the least free country was Afghanistan.

In terms of healthcare, according to the World Health organization, the US ranks 37th in the world, behind countries most all European countries, as well as Canada, Oman, UAE, Saudi Arabia, Greece, Chile, Australia, and Morocco. In fact, the US ranked in between Costa Rica and Slovenia. That's actually pretty embarrassing if you think about it; a country like the US being ranked behind and in the midst of second tier countries.

The top spots went to Italy, France, San Marino, Andorra, Malta, and Singapore. Other nations in the top tier included Japan, all the Scandinavian countries, Spain, the UK, Ireland, Columbia, Saudi Arabia, Canada, and most of Europe. It goes to show that while "Obamacare" did improve overall healthcare in the US, it fell far short when compared to the rest of the world. In terms of healthcare performance, America actually ranks dead last. 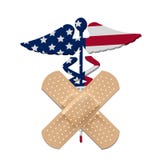 The study, conducted by the non-partisan Commonwealth Fund, examined five areas. Namely, Access, Care Process, Administrative Efficiency, Equity, and Healthcare Outcomes. The study showed that while the outspends every other country, we somehow managed to fail three of the five issues with Americans having the highest mortality rate of any country in the study; much higher than their counterparts in Europe. The report cites essentially a lack to adequate quality care as the chief cause. America would have fared far better had it adopted a single payer health system and allowed individuals and companies to purchase supplemental insurance. This would have allowed even small businesses to a means to compete with the larger ones without the extra financial burden or forcing employees to find their own coverage, and for a far cheaper price.

However, the US did come in first place in one key, albeit dubious category. American was ranked number one in terms of incarceration. We imprison more of people than any industrialized nation in the world at a rate of 655 per 100,000. That's more than China, Russia, Cuba, or even North Korea. The closest country to us is El Salvador, which jails 609 per 100,000 and Turkmenistan with prison rate of 552 per 100,000. Cuba jails 510 individuals per 100,000 while for Russia it's 409 per 100,000. The top reason for the imprisonment in the US was due to drugs, possession or sell, followed by felonies of one sort or another.

Well, there you have it. For a nation which fancies itself as the bastion of freedom, it appears the facts don't back up the hype. In most of the studies, the US typically ranks between the middle and the low end of the second tier of whatever category we're looking at with one glaring exception. The problems we face are not partisan issues. This isn't solely the fault of the Democrats or the Republicans. It can't be attributed to the extreme Left or Right. This is a systematic failure in which both sides share the blame equally. This is what the partisan bickering has brought us, not to mention the corporate control of the agenda and the demise of labor unions (say what you want about unions, they at least ensured that their members received good wages and benefits). Our next installment will focus on income inequality. I hope you will join us.

US freedom ranking lower than you would think

Freedom around the world: The most (and least) free and tolerant countries

Countries with the most prisoners per 100,000 of the national population, as of July 2018

The US Ranks Last in Health Care Systems Performance