How to buy Congress and influence People (or are politicians cheaper by the dozen?)

Last week I provided you with the names and a little background information about of the "Big Six" mega-corporations which control 90%+ of all media outlets, and thus, our opinion as to what's happening in the world. These same six corporations also affect out entertainment, and not just the news. We touched on how this impacted our opinion of events and of the media itself, which we broke down along age demographics. I think many of you were surprised at the hold a relatively small group of individuals have on what we see, hear, and read. These six corporations decided what's news, how it will be presented, and how to spin it for any agenda they're a pushing at a given moment. They also control how we relax, be it video games, sports, or some show on television. In this issue, we're going to look at the top corporate political campaign givers.

Given that two Supreme Court misrulings, Citizens United and the McCutcheon's cases have completely altered the political landscape by declaring corporations are "people" and money as "free speech", it's important to know who the average Joe and Jane Public are competing against (given the corporations can contribute what it want while ordinary "flesh and blood types" citizens are still capped). We will start with the premise that money brings with it not just power, but also access to power and influence. For the majority of Americans, seeking public office is simply out of their reach because of the high cost of elections. It's no wonder that Congress is referred to as the "Millionaires Club". So, without further ado, let's take a look at some of the top Fortune 500 corporations.

While these are some pretty impressive numbers, they're still chump change compared to the big spenders. Take Morgan Stanley for instance. This New York bases financial services company donated 54.9% of its $5,362,033 to the Republicans. Democrats got 44.1%. Another New York financial services and banking company, JP Morgan+Chase, contributed 54.5% of its allotted $6,173,244 to Democrats, while Republicans got 49.9%. Microsoft, the Washington base tech giant, had $7,222,345 to donate, and Democrats got 80.2% of it. Meanwhile, Republicans got 18.6%. Topping the list is Goldman Sachs. This New York based financial services corporation had $11,457,248 to donate. Hedging their political portfolio, they invested 52.2% in Republicans and 47% in Democrats. Now, if you think these numbers are mind boggling in both their size along with the amount of political favors and legislation they'll buy, sit tight. You haven't read anything just yet.

Did you know that just 2/3 of all individual campaign contributions come just 1/4 of 1 percent of voters? According to a CNBC article from April 2018, 30% of that money went directly to the candidate. The rest, called "soft money" contributions, went to groups who spent the money indirectly on behalf of the candidate or issue. So how much money are we talking about? Try $154 million dollars (and just the top 100 individual contributors). Of this, the majority leans Right or Conservative to the tune of $83 million dollars. $65 million leans Left toward Liberal candidates and causes.

Everyone has heard of the Koch Brothers, who are usually portrayed as the evil incarnate by the politically slanted media, however, they are far from the biggest contributors. They give just under a million dollars ($997,000) to Republicans, whereas fellow conservative Geoff Palmer, owner of GH Palmer Associates, donated $2,403,172 to Republicans. Robert Mercer of Renaissance Technologies gave $3.7 million to conservative causes and candidates. Steven Cohen of Point 72 Asset Management has given Republicans and conservative causes $3.4 million. Another partner from that same firm is Henry Laufer. He's not shy about spending money either. He donated $2.5 million to Democrats (I've got to get a job there!).

Now don't feel left out Democrats. You've got some big money behind you too. James Simons of the same corporations as Mercer, donated $3.2 million dollars to Democrats. The "evil villain" according to the political Right, George Soros, has given Democrats $1.4 million dollars. Now, compare those numbers with Donald Sussman of Paloma Partners who gave Democrats $6.1 million dollars. Barnard Marcus of the Marcus Foundation gave Republicans $5.5 million dollars while Fred Eyechaner of Newsweb donated $4.6 million to Democrats. George Marcus of Marcus & Millichap had $4.2 million for Liberals, and so the story goes. However, the two largest contributors haven't even been mentioned yet, so let's get to it! 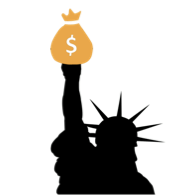 Thomas F. Steyer of Fehr LLC is the top Democrat and liberal issues contributor. Steyer, who was born in 1957, is a hedge fund manager whose net worth is around $2 billion dollars. Steyer consider himself to be an environmentalist, philanthropist, and a liberal issues activist and fundraiser. His current political project is a campaign to impeach President Trump (of which he's donated some $10 million dollars thus far). But perhaps his biggest claim to fame is that he's the single largest contributor to Democrats and liberal causes in the amount of $16 million dollars. Obviously, that adds a whole to dimension to the old term "Limousine Liberal" doesn't it? However, as impressive at Steyer may be, he pales compared to the single largest private donor, Richard E. Uihlein. Uihlein is the owner of Uline, Inc, which is shipping supply distribution company, was born in 1945. Uihlein is a active contributor to Republicans and other conservative causes (he also has close friendship with Republican Senator Ted Cruz of Texas). So, how much as Uihlein given? A cool $21.1 million dollars.

This is just a sampling of the ruling Oligarchs in this country. They are part of the elite one percent. Thanks to their wealth they can and do buy the kind of political access that the ordinary American voter can't even begin to comprehend. Not only do they have the instant and full attention of anyone and everyone in Washington, they are able to influence legislation. Through their lobbyists and friends in Washington, they can create or kill bills at the snap of their fingers. There's a reason that Congress is called the "Millionaire's Club".

Political parties really don't meant much to them, even though they may contribute to one party or cause over another. When you get down to it, they support those who can get things done for them, and that usually translates into making them more money or getting them access to resources somewhere. If it's a Democrat who can do that best for them, then they'll get with that individual. If it's a Republican, then that's where they'll go. Ultimately, it comes down to this---both political parties are part of a single corporate owned party with differing special interests groups each trying to get their agenda through. However, it matters not to which party holds the majority because money buys a lot of favors and it's doesn't care if you're "red" or "blue" (as an aside, red and blue make green, the color of money).

If the Democrats were truly the "People's Party" and meant everything they claim, there wouldn't be the first Republican in office anywhere in the country. If the Republicans were true to their dogma, then not a single Democrat would exist, certainly not in City Hall, our state capitols, and especially Washington. However, they do exist and they do hold office, and they do cooperate, especially on issues of mutual importance. That is to say, they cooperate on matters their corporate masters want to see accomplished. Now, don't get me wrong. I like money. It's pretty handy and has a lot of uses like paying bills and buying groceries. But, I don't like what it buys when it comes to government, especially when it's for the benefit of a tiny few.

American voters are capped by how much they can donate to political campaigns and issues. However, thanks to the Supreme Court's duel mistakes (Citizens United and McCutcheon), corporations have become "people" (I prefer to think of them as "Frankensteins") and money has become "free speech", I think voters have been locked out of the political process, especially when you consider that while we're limited in how much we can donate, these Frankensteins can donate however much they want. We can't begin to compete or offset the amount of money they can donate.

Of course, key players in Washington have made it clear that there will be no realistic campaign finance reform. Even if someone had the backbone to try, no committee chairman would dare let it pass out of their committee lest they face the wrath of their party's whip and leadership. Besides, the corporate lobbyists would ensure that the bill was rewritten or amended to their favor. I would imagine too that whoever tried to write a serious campaign finance reform bill would find their career blunted. They would likely get booted off all their committees, and find themselves with no money or help when it came time for reelection (and a good chance of facing a formidable opponent recruited by their own party).

So, just as real campaign finances reform would be good for America, so to would be an end to gerrymandering (rewriting district lines to the benefit of a specific political party to ensure reelection), reforming the tax code, imposing term limits, a balanced budget amendment, national single payer health coverage and stopping the Capital Hill/K Street revolving door (K Street is where most of the lobbying firms are located). I think requiring the politicians in Washington to be subject to the same laws they pass would be nice too, along with ending a lifelong salary with benefits after they leave office, security, and other high dollar perks. But none of this will ever happen as long a money dictates legislation and motives in Washington and elsewhere in politics.