President Trump and the Mexican Wall

Presidential candidate Donald Trump promised us a wall. It was to be a wall which ran the length of the US-Mexico border ---1,933 miles--- and the Mexican Government was going to pay "100%" of it according to Trump. Well, we still want that wall, yet the President-elect hasn't said to much about it, although he is still putting together his Cabinet. I'm sure Mexico is still holding its breath, hoping that the promise of a wall to keep illegal immigrants out was just the usual campaign rhetoric---all bark and no bite. Of course, Mexico's current president, Enrique Pena, has said that they would never agree to paying for a wall they don't want and that if one was built, he would suspend trade to the US and hinted that Mexico would try to tear it down or circumvent the wall everywhere and every chance they could. Everyone knows that the Mexican drug cartels have dozens of well built tunnels running under the Mexican-US border from Texas to California (and then there's all the access points along the Gulf Coast, all California's coastline, and, of course, by air). Former Mexican President, Vicente Fox added a bit more drama by repeatedly stating that the US had "no right" to erect a barrier between the two countries and Mexicans had "every right to come and go as they pleased".

So, what's the latest? We know (at least by estimation) that there are currently just over 11 million illegals in the US, which is down from approximately 12 million a few years ago, and that number seems to be holding steady. Of that number, around 52% are Mexican, with the rest coming from other parts of Central and South America as well as from Asia, the Middle East, and Africa. The state's most affected include the usual suspects such as California, Oklahoma, Texas, Arizona, New Mexico, along with some surprises like Washington, New York, Louisiana, North Carolina, and Tennessee. The majority of these individuals are employed in low income, often manual labor jobs such as in the restaurant business (table busing, servers, cooks, dishwashers), fashion (seamstresses, pattern cutting), hospitality (maids, laundry), agriculture (farm hands, pickers), general construction (roofing, paving, painting/wallpaper hanging, framing) as well as tree trimming and auto mechanics.

Most are here because they were in search of a job, not a chance to start over as Americans as many proponents of open borders and amnesty claim. In fact, the overwhelming majority of illegal immigrants have openly stated that they have no intention to become a US Citizen, even if they had the opportunity to do so. Many have also stated that they have no interest in learning English (or if they do, just enough to get by: many depend on the few who are bilingual). Some have also insisted that their children be taught in Spanish only---no English. This means taxpayers are forced to pay for bilingual tutors as well as extra school books and material printed in Spanish. In addition, taxpayers are forced to pick up the costs for healthcare, which, again, calls for bilingual employees.

Although it is a criminal offense for employers to hire illegal immigrants, many do. Under the Obama Regime, the Department of Justice was ordered to curtail its enforcement efforts while the ICE and the US Border Patrol were both order to stand down (in some cases, they actually ordered to either look away or leave the area). We also saw the AG suing the State of Arizona for codifying and enforcing existing US immigration laws (the AG also took the unprecedented step of allowing a foreign government---Mexico---to take part in the lawsuit, and, of course, who could forget the monumental (and criminal) blunder by AG Eric Holder and the ATF with the 2009 - 2011 "Fast and Furious" fiasco which illegally sold weapons to Mexican criminals and drug cartels in the ill conceived effort to "track" the weapons. 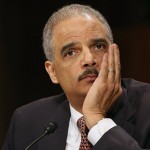 Actually, I shouldn't say "ill conceived" since they proved fairly easy to track with the wounded or murdered DEA, ICE, and US Border Agents, not to mention innocent civilians. In my mind, both then Attorney General Eric Holder and the Director of Homeland Security, Janet Napolitano, who oversees Immigration and Customs Enforcement (ICE) should have been fired and prosecuted for their actions while in office, but when your boss and buddy is the President of the United States, I guess you can get away with a lot (in all fairness, AG Eric Holder was cited for contempt by the Senate Judiciary Committee and the House Oversight and Government Reform Committee, which is a lot like a parent threatening a misbehaving child that they'll count to three if the bad behavior doesn't stop).

So, this brings us back to the wall. Its seems more and more likely that there will be no wall. Republican legislators have been cold to the idea ever since then candidate Trump first mentioned building a wall. Some represent states with large Hispanic populations, and, of course, politicians are always thinking about the next election. Legislators in California have made it abundantly clear that they could prevent any type of barrier to be built. Some have cited the impracticability of wall given that it would gave to close to 2000 miles long, plus include motion sensors (and I suspect drones) to monitor anyone trying to climb over it, as well as ground sensors to monitor any below surface digging, as well as regular patrols and fast response teams.

Of course, there is the question of what to do with all the illegals caught. Currently, most are booked, photographed, given a quick physical and meal, then bused or flown back to the home country where a few days or weeks later, everyone plays the same "hide and seek" game all over again. The only ones benefiting from this are "coyotes" or people smugglers who make a minimum of US $1000 a head and the drug cartels who persuade (or intimidate) a few to act as "mules" or drug smugglers in exchange for passage. A few may end up in jail---at the taxpayer's expense as always---where the team up with convicted gang and/or cartel members and learn a whole new set of "job skills". Countries like Mexico have no interest in stopping the illegal border crossings since it helps with their economic problems by reducing their unemployment numbers and the drain on their public assistance system (plus Mexico and Latin America has little to no middle class thanks to outdated socio-political-religious policies and norms). Secondly, most illegals in this country regularly send money back to their homeland which, again, helps their local economy. Lastly, there the notion that most of Western and Midwestern US actually "belong" to Mexico based on the mythical land of "Aztlan", as well as land acquired during the Mexican-American War between 1846 and 1848 following the Texas Revolution of 1836 and it annexation of 1845.

There's a lot of businesses who don't want a wall built either because they depend on the cheap...and unregulated labor. These are often the folks who'll work their employees for next to nothing for hours on ends and often in unimaginable conditions, but not always. Some are seasonal employers, especially farmers or those in the livestock or horse industry who need low skilled but dependable help. The pay isn't great but not that bad either. The work is often long, hot, sporadic and necessary. Labor unions too oppose restricting illegal immigration. Why? Because most are employed in low skilled blue collar jobs which are usually unionized. Unions hope these individuals join unions for no other reason than to build up their near empty coffers. Finally, there are the religious institutions who believe they are "doing God's work" by ignoring federal, state and local laws by aiding illegals in their efforts to violate immigration laws; by providing short term shelter and food; by arranging for long term housing, employment, and assisting in getting around laws, especially when it comes to education for their children or obtaining medical care. In exchange, they get a future parishioner, donor and volunteer, as well as adding to their denominational clout. Thus, in short, it'll be a tough sell even for "The Donald". As for the pro-amnesty folks who like to "boo-hoo" about "tearing families apart", let's place them blame where it squarely belongs---on the violators themselves. They know their actions are illegal. They understand they are intentionally committing a crime. They know what the results will be if they're caught. They know what the right thing is they should do, be it for a seasonal, temporary, or long term job. Sorry, but pulling at the heartstrings just doesn't get it. They're the ones who are solely responsible for their decisions. It's like not jailing a bank robber because it's going to be hard on their family. So, what can Trump actually do? Well, it's obvious that despite how good the sound bites were, there won't be a wall. As President, he can appoint an Attorney General and Director of the Department of Justice who will follow the law and do their job. He can ensure that there are ample ICE and Border Patrol Agents and they are adequately funded. He could have individuals caught grouped by origin and dumped at the nearest embassy (or bill each country for the expense which could be deducted annually from whatever loans we give them). Trump could ensure that all federal funding be stopped from an state, city, or institution which grants amnesty or aids illegals (in the case of non-profit institutions such as churches, they could face suspension or loss of their tax-exempt status). Education is in English, and so are all government documents; no federal funding provided otherwise. No further taxpayer paid medical care, unless it's for an emergency and hospitals, medical institutions, and healthcare workers cannot pass on costs to any federal agencies. Same goes for businesses---suspension of their business license and/or of any federal contracts, loans, or grants---who fail to assist any illegal worker not obtain a work permit or green card. In addition, each officer of the company is personally fined (it's a crime after all) along with the company itself. Lastly, Trump can encourage and aid each offending nation rebuild their infrastructure and develop a stable middle class, provided they actively and demonstrably work to end the influx of illegals from their countries (after all, we give them millions if not billions every year, why not have them do something for us for a change?). It's not perfect or even ideal, but by allowing certain government agencies to do their jobs; by withholding federal funding from those in violation; by both penalizing and aiding the offending country, Trump can do a lot better than building a wall.


5 Facts about illegal Immigration in the U.S.
http://www.pewresearch.org/fact-tank/2016/11/03/5-facts-about-illegal-immigration-in-the-u-s/


Judge to Janet Napolitano: You have to deport illegal immigrants
http://www.washingtonexaminer.com/judge-to-janet-napolitano-you-have-to-deport-illegal-immigrants/article/2528019