The Race to Beat Trump 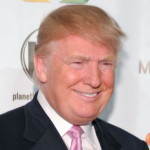 I have to admit that I'm perplexed and to be honest, a bit amused. Why you ask? The Republican Primary and race to defeat Donald Trump. I've never seen anything like this and I've been involved in politics for a very long time. This is much more than just an attempt to dethrone a frontrunner. It goes far deeper than that. There is an organized and concerted effort by both the Democrat and Republican Establishment to defeat Trump before the May 17th Primary, and if they can't do it then, the GOP party boys seem intent on using "small print" convention rules to deny him the nomination.

As a few political observers have noted, a party nominee isn't determined at the conventions by the candidate with the most delegates(i.e., who the people want). The nominee is chosen by the party leadership, who may, at their discretion, ignore the wishes of the voters through the use of so-called "super-delegates", which were built into both parties by-laws in ensure control, along with more than a little backroom intimidation and bribery. I think this is something most voters were unaware of previously; that their vote doesn't necessarily mean anything, which seems to play right into Trump's hands since part of his campaign has been about just how corrupt both political parties are.

Almost from the outset, the GOP leadership, the candidates themselves, the corporate media (including several at the once conservative Fox News), and naturally, the Oligarchs who now run this country, have been behind a no holds barred campaign to belittle, bully, distort, and harass Trump and his supporters. We would expect this from the Left leaning wing of the corporate party, the Democrats, and the Left leaning (but corporate controlled) media, but not from the those on the Right. We've even had candidates try and team up against Trump, such as Carly Fiorina, Marco Rubio, John Kasich, and Ted Cruz in various configurations. When did that last happen? Just recently, Ted Cruz and John Kasich, who is still nominally a candidate though mathematically eliminated, publically agreed to join forces to work against Trump. A few days ago, after losing all four races in the same night, Cruz, acting "as if" he was the party's frontrunner, announced that former candidate Carly Fiorina was going to be his choice for Vice President. Seriously? Cruz has no chance of catching Trump at this point, so why is he announcing Fiorina as his running mate? Is he counting on the party boys to engineer his nomination? Is this a "Hail Mary" effort to pick up at least a few more delegates so he doesn't look so bad going into the convention? Is it to deny Trump the opportunity of asking Fiorina (though doubtful) to be his running mate?

Then there are all the protestors showing up all of sudden at Trump rallies. Again, when was the last time that happened? I'm reminded of the 1968 Democratic Convention in Chicago, when there were a large crowd of anti-war protestors down the street and the Chicago Police were given approval by then Mayor Bill Daley to go ape on the protestors, which spilled over into the convention itself and police "thugs" went after a few reporters and camera crews they disliked (the incident later became known as the 1968 Chicago Police Riot). A lot of people were seriously injured by the Chicago cops; something which I think they have yet to live down. Now, we have individuals sneaking into Trump rallies, trying to shout down speakers, start fights, pushing people around, tearing up signs, and whatever else they can to do. It reminds me of the ways the Nazi "SA" or Brownshirts, the Italian Fascist Blackshirts, and the Communists used to do back in the 1930's (as did corporate hired thugs to break up union meetings); anything to disrupt, embarrass, or intimidate their opponents. The corporate media presents the disturbances "as if" it was all Trump or his supporters fault by cherry picking what they say and how they edit the footage. No wonder people don't believe the corporate media anymore.

Recently, the violence has increased. We have protestors breaking through police barricades and attacking Trump supporters, throwing bottles, rocks, tearing down signs, blocking entrances and even trashing police cars and assaulting police officers. Of course, the corporate media bends over backwards to blame Trump. All of this is, naturally, to create a negative image of "The Donald" and keep supporters away, all in an attempt to sway voters to Cruz or at the very least, get them to lean to towards Hillary should Trump get out of the Primary with the GOP nomination. What they've accomplished, however, is in making themselves look like punks. In fact, I think we've long passed giving them the legitimacy of calling them "protestors", which implies at least a measure of order. What we are witnessing aren't "protests". These are political riots like what you would expect to see in Third World countries or places with dictatorships who order opponents and their supporters to be harassed (Paraguay and Egypt come to mind). Is that what we've become? Is that how our political system functions how?

In just the past few days, we've seen thousands of these "political rioters", including hundreds of apparent illegal immigrants and others with dozens of Mexican flags, breaking through police and security barricades, overturning police cars, burning the US flags, violently attacking individuals who simply came to hear Trump speak---leaving several beaten and bloody, blocking traffic for miles (which has become a favorite tactic of late); forcing Trump and other speakers to cross a footbridge, cut through a fence, and come in a side door...to his own event! Even during the worse of the riots of the 1960's and 1970's, this never happened, not at least to this degree!

What all this says to me is less about Trump and his message, and more about what the Oligarchs who run this country are afraid of. What is it about "The Donald" that inspires such fear on the part of the powerbrokers and their pawns? Is it the fact that Trump has enough money to fund his own campaign and isn't beholden to them; doesn't have to make any special deals? Is it because he is actually a political outsider, and not one of the usual insiders who pretends to be "one of the people" and will "stand up to the special interests in Washington"---that is, until the election is over (the only "standing up" they do is when their paymasters walk into the room and that's because many are too old thanks to gerrymandering and the absence of term limits to be able to get off their knees).

Ted Cruz and others like him like to pretend he's not one the Oligarchs' minions, just like all the rest in Congress. It's part of the game. They try to convince the American People they are "different"; that they really represent the interests of the ordinary Americans, just don't look to close at their records or who they get their money from. These are the vetted and pre-approved candidates who will do as they told, without question or conscience. They will foment wars, economic downturns, labor and social unrest, challenge traditional family values; whatever is required of them just so long as their Overlords, the Oligarchs, make a profit and enlarge their control. After all, control is the name of game, be it control over resources in some far flung nation or here at home. It's also control over us. We're are necessary liabilities. The more control they can exert over us, through control of the economy, our workplace, our credit ratings, social norms, and most of all, our privacy, the more they can maximize their profits and minimize their risks by manipulating and anticipating our actions and reactions. They control our elections through pricing ordinary---and perhaps more qualified---individuals out from the get-go. They buy who they want, thanks to Citizens United, and keep them for as long as they want, with thanks to gerrymandering and no term limits. It's how we went from being a democratic republic to a neo-fascist nation with an emerging police state. Welcome to the Machine boys and girls. 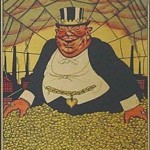 Perhaps all this is what frightens the Oligarchs the most about Donald Trump. He's unscripted, which makes him genuinely popular with ordinary Americans across the political spectrum. He's self-financed, so no backroom "sell-your-soul" deals. He's a actual outsider, not a Kool-Aid drinking Democrat or Republican follows party dogma over the Will of the American People (what a novel concept). He's willing to think outside of prescribed boundaries or act in pre-approved ways. He's willing to do what the American People want, not just either make empty and meaningless promises or simply ignoring us altogether. He will not take a stand, but make a stand, regardless of whether its popular with the 1% elites or not. Personally, I haven't been a particular fan of Donald Trump through the years; a bit to brash for me. However, if the Oligarchs, their corporate media, the K Street moneymen, the party boys on both sides are willing to go to this extent to degrade, belittle, harass, intimidate and bully, burn vehicles, attack and beat innocent people up, blocks highways and streets, assault police officers, burn American flags, bring out illegal immigrants, then there must be something they are terrified of and if that's the case, then Trump must be on the right track and that's someone I think we need to get behind.