Not The Change I Think We Were Hoping For

What do we want for this nation, this America? We're now the second largest economy in the world, behind China. The American President, once revered as the "Leader of the Free World", has loss much of his political clout (and in some cases, any serious credibility). In fact, the American Presidency is now ranked as the third most powerful office in the world, behind Russia's Putin and Germany's Merkel. Along those same lines, America isn't even regarded as the world's most respected nations. That honor now belongs to Germany, though I suspect recent events in Germany with the "refugee" situation may have seriously damaged both Merkel's and Germany's rankings.

According to the Freedom Index, which measures economic and personal freedom, the United States is 12th in the world according to a 2014 study done by the conservative Heritage Foundation. The Frazier Institute of Canada places the US in 16th place according to its Economic Freedom of the World Index, published in September 2015 (we're in 43rd place for press freedom, between Romania and Haiti while Reporters Without Borders rank the US in 49th place). Pretty sad if you ask me. But, then again, it really shouldn't come as a surprise to anyone since we are no longer a democratic-republic. We lost that national birthright a few years back while we were busy playing video games and watching so-called "reality shows" or B-list entertainers trying re-established their media credibility by dancing their way into our living rooms. Apparently, we would rather spend our time in the world of make believe than deal with the reality which confronts daily. As many of you know, we are a de facto oligarchy; ruled by individuals not elected by the American voters. This oligarchy, comprised of a small groups of very wealthy and powerful people whose interests, I can assure you, are not the same as you and I. If the people benefit in any way, well then, that's just a happy coincidence. I guess that makes us co-conspirators in the usurping of the Constitution by our unwillingness to act. Some claim that America is becoming Communist or worse, Socialist. Really? Neither political system would tolerate bank bailouts, corporate welfare, a revolving door between corporate lobbyists or senior officers and government. There would certainly be no bailouts with public money because of greedy owners using taxpayer money to give themselves bonuses or to save them from bad business decisions. Neither would approve of "Citizens United" which created a new type of "individual"---the corporate person; a "Frankenstein" whose voice sounds like cash being counted. That's because Citizens United said that money was "free speech" and as such, these Frankensteins were free to give as much as they pleased, yet you and I---flesh and blood humans---are still limited to what we can give. Frankenstein gets to shout to the hills and we're reduced to mumbling to ourselves.

Communism and Socialism won't permit a destruction of unions either. Under Communism, the State is the union and all workers belong to it. The State owns the corporations as well. Under Socialism, unions are encouraged but not required. Employee associations own the corporation they work for. They share in the work and the rewards. Under Communism, the State owns practically everything. Everything is shared equally---even poverty---though not necessarily so for the party's nomenklatura---the "party boys". Under Socialism, taxes are high but then they offset public health and medicine, education, mandatory vacations, subsidized housing, food, cable TV, museums, plus provide for public services. If your company does well, you do well. If not, well you might want to look elsewhere or stick it out. Of course, there would be little need to outsource jobs too. After all, you're one of the owners as well as one of the employees. Are you going to ship your job overseas? There would definitely be no deregulation of businesses, especially where the environment was concerned. I can't imagine Socialists at least of approving corporate promoted wars---overt or covert--- using the government as the intermediary for the sake of economic or resource control for, oh let's hypothetically say, oil or gas or cheap labor or unregulated environmental controls. Just saying.

Under Socialism, there's no need for a surveillance nation; a police state (Communism is a altogether different matter). No need for gerrymandering districts. No unlimited political terms. No dear readers, I don't think we're morphing into Communism or even Socialism, but that just might be what the powers-that-be fear the most, so they do their best to demonize it. Corporations aren't exactly "democratic". They tend to be authoritarian---their way or the highway. No reason to think they'd run a country---or a politician---any differently. After all, what could be worse from their perspective than the people actually having the power or the country being run democratically?

However, to be fair, we're at least partially to blame. We've seen what's gone on in our name. We've willingly allowed them to buy our compliance with our own tax dollars. At the very least, we've felt something wasn't right. We've watched the corporate owned news programs and could tell that what we were told didn't match what we were seeing and hearing in the "real" world (as an aside, did you know that only eight corporations control over 90% of all the media you see and hear, including the news? Kind of handy to know). Meanwhile, we've allowed the government, or those behind the government, to control our lives by telling us we "had" to have this or that; that we needed to "plug in" with the latest app or "smart" devise. Somewhere in all this, we've gone from being good citizens to our nation and community to being loyal consumers of some brand. But then why not? Corporations don't see countries. They see resource zones and economic markets. They are "citizens of the world" and we're just necessary liabilities; willing economic serfs tied not by ropes or chains, but by plastic and electronic tools.

Yeah, we get to do some pretty cool stuff with this technology, but at what price? And just how important is it when compared to all the personal---private---information you willingly surrender, including what you read, watch, your private communications, your credit and financial history, what you buy, what you eat, drink or smoke...your very whereabouts? Now, they can even watch you from the sky thanks to specialized satellites and drones. Maybe I'm just old fashioned or paranoid (being a child of the '60s and '70's will do that to a person), but I personally don't think it's anybody's damn business what I do unless I want them to know, and forget that garbage about the information being gathered on each one of us being "temporary" or "for our own good". First of all, this stuff never ever goes away. Second, with the virtually unlimited storage capability, it can accumulate forever. Hell, it will outlive us or our great grandchildren! Do we really want some corporate or government agency to have power over our lives; to analyze, repackage, sell or manipulate at their whim? Not my preference, but then if I'm not on some government list by now, I should be ashamed. 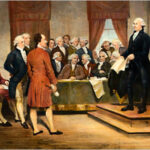 We still like to tell ourselves that we're free; the world's beacon of freedom, but we know better don't we? We're on the fast track to fascism; what its founder, Italian Benito Mussolini, once said should have been renamed as "corporatism" since it better reflects the true role between government and the elite. I wonder what the likes of Washington, Adams, Madison or Jefferson would think of us now. For that matter, Hamilton, Hancock or Payne too. Do you think they'd be proud of us; of what happened to their great experiment? Somehow, I don't think so. I don't think they would have expected us to remain stagnate---socially, culturally and certainly economically. Yes, they would have been proud of slavery's demise and likely of the Civil Rights Movement and Women's Suffrage (LGBT rights? Not so much I suspect, but then they were only a few generations removed from the Puritans). Sadly, they may have found justification in the success of our "Manifest Destiny" and the fate of the Native Americans, which goes to show how "unenlightened" our enlightened Founders could be. But what of our decline of individual freedom? Of the loss of our autonomy as individuals and rise in power and control of government and these artificial "people"---corporations---I think they'd be appalled at the very notion.

I guess the question is what do we do? Do we do anything or just accept as our fate to become wage slaves; subject to the control and dictate of a some corporate state? Do you think some politician like a Trump, Cruz, Rubio, Hillary or Bernie can seriously change things sufficiently enough that it will a real difference? Regardless of who is elected as president, they still had to deal with Congress and the Supreme Court...and the "K" Street lobbyists and their corporate masters with their millions of dollars to buy the legislation, policy or politician they please...and with the corporate/government revolving door; that nomenklatura who run departments, bureaus and agencies...but for whom I sometimes wonder. There's much work for us as nation to do, but it's still doable if we set aside all these petty and manufactured differences designed to divide us a nation. I think that's what our "overlords" fear the most...a truly united nation.

(Disclaimer: I feel it's necessary to point out that I am not a Communist, Socialist, Leftist or even a Democrat since somebody is bound to make that assumption. I do not think government or corporations can be trusted to do right thing unless regulated and monitored. As for personal information, I believe that I, as an individual and originator of that information, am the best guardian of my information and that I should have complete and final say over the ownership, storage, use, sale or manipulation of that information).


This Is A Ranking We Should Not Be Proud Of
http://dailysignal.com/2014/01/14/economic-freedom-u-s-dropping-rankings/


Forbes ranks the world's most powerful people of 2015
http://www.cbsnews.com/pictures/forbes-reveals-worlds-most-powerful-people-of-2015/11/


BBC News: Study: US is an oligarchy, not a democracy
http://www.bbc.com/news/blogs-echochambers-27074746