Memorial Day. The unofficial kickoff of Summer, when thoughts turn to vacations to the beaches or lakes, a three day break from the drudgery of work, and cookouts. When it seems like every store is offering a "gigantic" sale on everything from apples to appliances and everyone is "entitled" to "employee pricing". Where car dealers proclaim their "best deals are now available" with "low low" interest rates, special rebates, and all sorts of other bargains designed to lure customers looking for a deal. Yelp, just another day and another reason to go on a buying binge. Yet, Memorial Day is meant to be a day of national remembrance for our war dead, as well as those who were wounded. Amazing how something so solemn can so easily be turned into something so gouache and commercial isn't it?

Originally, Memorial Day was established as "Decoration Day" and as far as anyone knows, was first observed in 1862 by the women of Savannah, Georgia, who laid wreaths and flowers on the graves of fallen Confederate soldiers. In 1866, Confederate Memorial Day began and continued under the care of the United Daughters of the Confederacy. By 1863, the graves of fallen Union soldiers were being decorated at a the city cemetery in Gettysburg, Pennsylvania.

Following the Civil War's end a few weeks earlier, the first national observance took place in Charleston, South Carolina on May 1, 1865 when former slaves and abolitionists commemorated the graves of some 257 union prisoners of war who had died and were buried in unmarked graves during their imprisonment at the Charleston Race Course, which had been used as a makeshift prison. In 1866, it was reported that the women in Columbus, Mississippi were laying flowers on the graves of both Confederate and Union soldiers, while similar observances were taking place at cemeteries at North. By 1882, "Memorial Day" as we now honor it came into being, though not as an official national holiday until 1967.

The poem "In Flander's Field" was penned on May 3, 1915 while its author, Lt. Colonel John McCrae, a Canadian, was sitting in the back of an ambulance the day after he had presided over the funeral of a close friend and fellow soldier, Alexis Helmer, following the Second Battle of Ypres in the Flanders region of Belgium. This was the first battle in which a chemical weapon (chlorine gas) was used for the first time in modern warfare and Helmer was among the 122,156 causalities of the five week battle. McCrea was moved by how quickly the red poppies appeared around the graves of the fallen and chose to composed the poem from the viewpoint of those who had died. 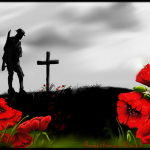 Inspired by the poem's opening line, "In Flanders fields the poppies blow / Between the crosses row on row," Moina Michael, a professor at the University of Georgia and later, a volunteer at YMCA's Headquarters in New York, came up with the idea of using red poppies as a symbol of remembrance for those who had served in "The Great War" and began passing out silken red poppies. In 1921, the Veterans of Foreign Wars adopted the red poppy as a symbol of remembrance for all veterans and ever since, the red poppy has been known as the "Memorial" or "Remembrance" poppy.

So, in your enjoyment of a three day holiday, cookouts, and sales galore, take a minute of your time to remember all those who served and paid the ultimate price for freedom...your freedom and that of your family and friends so that they might not have bear the horrors of war or the yoke of tyranny as so many others have. Freedom is never free. It's price is not only paid in vigilance and blood, but in empty beds,long lonely nights, endless streams of tears and "what might have beens". Finally, in closing, I would like to leave you with Lt. Colonel McCrae's poem, "In Flanders Field". It's well worth the read.

In Flanders fields the poppies blow
Between the crosses, row on row,
That mark our place; and in the sky
The larks, still bravely singing, fly
Scarce heard amid the guns below.

We are the Dead. Short days ago
We lived, felt dawn, saw sunset glow,
Loved and were loved, and now we lie
In Flanders fields.