The Jong-Un on the Block: What will North Korea Do? 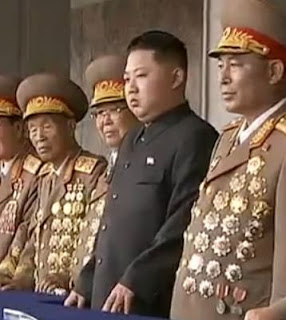 There's an old expression that the only difference between men and little boys is the price of their toys. Well, that seems to be true, at least in North Korea with Kim Jong Un playing with his adult sized model rockets. Yelp, the miniature tyrant wanna be is putting on an impressive temper tantrum by threatening South Korea, the United States, the various Pacific islands nations, especially Japan with nuclear oblivion (if only those darn rockets actually work this time).

Kim (which is his family name) is the son and grandson of North Korea's despotic dynasty which has lead the Stalinist nation since the Korean War and totally bankrupt the nation--economically, socially, and intellectually. In fact, North Korea has all but closed many of its universities and sent the students to the countryside to work in the fields. The rest have forced either into the North's massive, but largely antiquated military (although I have to say they march pretty and while we get to see nice shiny pieces of Chinese and Russian made hardware, what we don't see are rows of rusty and broken equipment). While the military seems to be well fed, the majority of the population is starving, so much so that the average North Korean is actually two inches shorter due to malnutrition than their Southern counterpart. The Northern population is still subject to mandatory cult like worship of the "great leader", complete with manufactured tears of adulation and hysteria bordering on psychotic the likes of which Stalin, Mussolini, Hirohito, and Hitler could only dream of (not to mention a few politicians in Washington and here locally I could think of). So, when with all the crocodile tears, what's all the hubbub about?

Well, there's several reasons for the current display of machismo. For instance, the "great leader" is untested. From what we know, he's well educated. He attended college under an alias and appeared to limited his contact with students, but those who knew him commented that while he appeared intelligent, he was obviously serious spoiled and used to getting his way. I would have therefore assume he grew something up like the sons of Saddam Hussein---arrogant, pampered, vain, and not used to being told "no". He has no military experience, so he has to prove himself as a military leader. By brazenly taunting their arch enemies---South Korea, Japan, and especially the US--Kim hopes to establish a reputation globally and especially at home as being someone who can command the world's attention and isn't to be trifled with.

It is highly doubtful the Kim will make any serious or even half hearted changed to North Korea's economy (if you still want to call it that), which brings me to my next point. Going back to at least Kim's father, threats have used to extort badly needed food, medicine, money in the form of loans (usually "forgiven"), and technology from the West. Their only international friend, China, has cut back economic ties with its kooky neighbor. Even the Russians seem to have little interest in propping up the Kim regime. So, will Kim order a nuclear strike on South Korea, the US, and even Japan, which he's declared to be his first target?

In a word, no. While Kim's military is formable in terms of numbers with 1.2 million under arms, it's not a military with long staying power. It would have to depend heavily on captured weapons, and especially ammunition captured from the South, which it could only do in a successful blitzkrieg style attack (note, South Korea's very capable military has uncovered and destroy numerous tunnels leading into the south over the years, which may give some inkling as to how the North would initiate an attack using it 120,000 man special ops units). The North's air force should more accurately be referred to as an air farce though it has a small but capable navy. Its armored units are aged and many are rusty or not operational. Yes, they do have missiles. Most are short to moderate range which may be able to hit places Guam (sorry Guam).

Can it launch nukes? Good question. The general consensus is "maybe". For years, most in the West thought the North was still years away from developing a nuclear bombs (they're saying the same thing about Iran), but some acknowledge that the North has enough fissionable material for as many as five small nukes with the destructive power as used on Nagasaki (sorry..again Japan). The big dollar question is whether they've developed a way to deliver it. My guess is that they have simply because so many "experts" in the West don't so (and say they say the same thing about Iran), and given their track record so far, I'm betting against the house. Now, they next key question is well they?

I think the answer here is much more clear. No they won't. Why? Well, Kim may be the new kid on the block, but I don't think he's stupid. A nuclear attack on anyone would result in massive retaliation and South Korea would become an island overnight. I'm sure Kim's generals and ranking officers would skip across the border to China, but would the Chinese want to harbor such war criminals? World pressure would be so enormous, they'd either have to give them up for a Nuremberg type trial with a Nuremburg type outcome (hanging in case you missed that particular history class) or shoot them their selves, and that would include Kim Jong Un, in the unlikely event he survived. I suspect one of his generals or other officers would likely put a cap in him long before then. As I said earlier, a conventional attack would be disastrous. The only real question is how far the South Koreans could push into the North before China would say "stop". A third option would be a pre-emptive strike by China. As I've said, China has had about enough of being North Korea's meal ticket and isn't about to risk facing nuclear fallout or an invading army near its border.

So, what does Kim expect to get out of this? What's the endgame? Actually, it's not that complicated. North Korea, as everyone knows, is stone cold broke. Even its facade as a military power is wearing thin as...well...its military. Therefore, with so little known about him, Kim is trying to create the image of a "wild and crazy guy" (with apologies to Steve Martin) with nothing to lose, which would go a long way with extorting the West and his Asian neighbors for desperately needed capital, medicine, technology and most of all, food. After all, it's been extortion that has kept North Korea afloat since the 1950's, so why stop now?

The solution, I think, would be to call his bluff. Go for it. It's always been the best way to deal with a bully, even a short fat bully with goofy haircut. One of three things is going to happen. The little snot is going jump and get the butt whooping he should have gotten as a child, which would free the North Koreans from decades of tyrannical abuse and solve China's problem as well the region's. Second, he'll shut up and be grateful for any more handouts he gets, which brings to the third and most interesting option. A coup. I'm sure the North Korean General Staff are a bright and politically savvy bunch, especially the Junior Staff who are patiently waiting their turn while privately hoping there will still be a North Korea and a North Korean military to lord over. The one way to make sure that happens, is to end this comedic farce once and for all and then set about to rebuild the North and bring it back into the community of nations. That would call for a true "great leader".