I'm sure most of you are aware that the Obama Administration has been going on a taxpayer funded buying spree of 2000 light tanks, bullet proof vests, 7000 full auto battlefield grade assault rifles, "no hesitation" civilian silhouette targets, and other assorted equipment like large tents, field beds, not to mention quietly acquiring empty warehouses, and tracks of land. While that should more than raise your eyebrows, I've been curious about exactly what type of new "play toys" Obama has been buying.

Well, let's consider that the Social Security Administration has procured 174,000 rounds of hollow points, and they only have 300 field agents, so that's 580 bullets for every agent! Who knew applying for retirement or disability could be so dangerous. The National Marine Fisheries Service was ordered to purchase 46,000 hollow point bullets for it 63 agents. That's just about 730 bullets per agent. Is catching fish over the limit that big of a deal? The Department of Homeland Security has bought 21,6 million rounds, above and beyond their original acquisition of 1.6 billion rounds, of which at least 10 million rounds are hollow point. Let's talk about these hollow points for just a minute. What are hollow points and what are they designed for?

So, what exactly what is a "hollow point" bullet? Well, these tend to be high power bullets with a indented "nose" at the tip. The purpose is to cause the lead portion to expand and slow upon impact, thereby causing maximum interior damage by creating larger entry points, internal tumbling, and terrific destruction of internal organs broken bones, and massive blood loss. In other words, these a types of bullets are designed for maximum stoppage. Not the type of bullet you'd use if you were intending on taking prisoners. Remember, these are the bullets that US agencies are buying en masse. So, just who or what are they "protecting" us from? Well, we've talked bullets, what about the assault weapons?

It turns out that the DHS and other federal agencies have acquired some 7000 5.56 x 45mm NATO Personal Defense Weapons (they're classified "assault weapons" if they average citizen owns one) with "select fire" which would allow short fully automatic rate of fire (if you own it, it's a "machine gun") of 800 rounds per minute. Great weapon for up close and personal situations, although they have a down range of 547 yards. Oh, each includes a 30 round clip (yelp, exactly like the ones Senator Diane Feinstein (D-CA) and other Democrats are trying to ban). So which one is the DHS buying? Why none other than the AR-15. The very rifle so demonized by politicians and the media recently. Ok, now that we have our rifle and ammo, what about our ride? 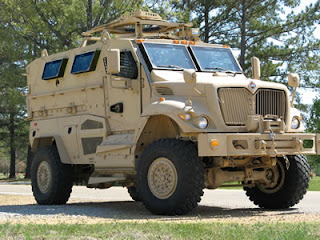 Well, it turns out that the Department of Homeland Security has actually purchased over 2,717 "mine resisted" heavy armored urban assault vehicles just like the kind you see US Marines using in Iraq and Afghanistan. Actually, speaking as a guy, they're kinda cool looking. The official name of these serious looking ATVs is Mine Resistant Ambush Protected (MRAP) vehicles, and these are no lightweights either. Each vehicle is just over 21 feet long and with a height of 10 feet, 8.5 feet wide, and a wheel base of just under 13 feet weighs in at 18.9 tons. The design includes a V shaped hull to deflect blasts from IEDS, landmines, and other explosives away from the crew. Each armored unit is resisted to ballistic arms fire as well as hand grenades, Molotov cocktails, and RPGs. The DHS is putting each vehicles through a minor refit which includes to include independent suspension, a 330 horse powered "Maxxforce" 9.3 engine. And what is perhaps most interesting of all, they being billed as "police and rescue" vehicles for use in hurricanes and other natural disasters. Seriously. With gun ports and a turret?

As for the "no hesitation" civilian silhouette targets, well get ready for a shocker. These targets are not your run-of-the-mill "John Dillinger" black silhouettes. No sir indeed. They are full sized colored photos of young children, seniors, men, and even pregnant women aiming a gun. The purpose of these silhouettes are to "desensitize" (hence the name, "no hesitation") the responder.

The federal government is basically broke, yet they are spending billions of dollars they don't have on high grade military supplies for non-military agencies while cutting basic social programs. The central question, of course, is what's going on here? There's much more being done by the federal government, but why? What is it that "our" government knows and doesn't want us to know? Is there a credible terroristic threat--perhaps a dirty nuke or massive terrorist strikes expected? And why the continued refusal to do anything about illegal immigration and an over-the-top push for gun and ammo restrictions? Are we facing a global economic collapse? After all, as America goes, so goes the world. Is there something being anticipated regarding global warming like massive crop failures and fresh water shortages Perhaps more Category 5 storms? Or is there something even more sinister at play here?