Sometimes, in the name of political correctness, people do the stupidest things. We all know illegal immigration is, well, illegal. The Los Angeles Police Department, not known for their public civility over the years, has decided that they didn't like a law regarding the ticketing and towing of vehicles belonging to illegal aliens. Now, silly me, I didn't think police officers also got to be legislators and judges too, but apparently in Orange County California they do! I thought (apparently mistakenly) they their job was to enforce laws; not enforce the laws they agreed with.

The majority of unlicensed people driving around in LA are illegals. The LAPD decided that it would be "unfair" to impound the vehicles of individuals who, regardless of the immigration status or perhaps in spite of it, don't have a drivers license. One would presume they also don't have auto insurance since most states require a valid drivers license and Social Security number to write a policy.

Since most illegal immigrants also hold low paying (and untaxable) jobs, they are unable to pay the fees associated with getting their vehicles back. Therefore, the trucks, vans, and cars, are simply abandoned to the City, which then falls on the county to store until such time as the vehicles can be auctioned off; usually at a fraction of the cost of storage, let alone the associated fees.

Written notices are often returned as undeliverable since the addresses given or either false or no longer valid by the time the violation is entered into the system and a notice is sent out. It's just as cheap for the violator to simply go out and buy another car for cash and be on their merry way. Meanwhile, we know who winds up paying the cost of storage, the fees, and any losses incurred by the City----the taxpayers.

Now, I may be going out on a limb here, but I assume that the LAPD will not be extending the same courtesy everyone who doesn't have a drivers license insurance or registration. Of course, should that happen, the LAPD could be opening themselves and the City to a substantial lawsuit. In the interim, we have one of the largest police departments in America deciding what laws they intend on enforcing. Another example of the "do nothing" solution. If the problem is allowed to become bad enough, we will have no alternative except the accept illegal immigration as the de facto immigration policy of the United States. If you'd like to read more, here's the link


Governing Through A Glass Darkly

The lack of transparency in government is the unspoken crisis. The American system of government has become largely a matter of sound bites amid smoke, mirrors, and shadows. Overwhelmingly, Americans do not trust their government, especially at the federal level. Congress's approval rating has been in 30% for decades. In other countries, that's low enough to stir the flames of revolution.

In a recent survey conducted by the Center for Public Integrity, not a single state was found to have adequate laws providing for transparency in government. None. There were five states with "B" ratings. 19 States received a "C" while 18 earned for their taxpayers a "D" and eight honored their citizens with an "F". My home state of Kentucky pulled a "C-" (thank you Greg Stumbo (D), David Williams (R) and Governor Steve Beshear).

Taxpayers deserve more from the people they send to their state capitols (and especially Washington DC). The results of this survey go back to what I've repeatedly harped on for years now, namely this: every single elected politician, government appointee, and government employee ultimately works for the us. These individuals are supposed to be our elected leaders and role models. We are their only special interest. Personally, I think we need fewer lawyers in elected office and more doctors, business owners, teachers, homemakers, retirees, and so forth. The increased diversity may create more sensible laws that is representative of America. Terms limits sure wouldn't hurt either.

If you'd like to read the results of the survey and see how your state ranked, here's the link. I urge each of you to send a copy to your legislators.


Escape from Camp 14: A book by Blaine Harden 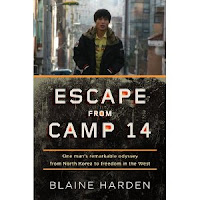 Much has been written about North Korea, from its Stalinist regime and comedic cult-like worship of its "Dear Leader" to a dismal economic policy based more on threats of "going nuclear" in exchange for food and medicine than any real attempts at economic growth. Even its principal ally, China, has grown weary of propping up its one time Cold War ally. Cities have been largely emptied while universities have been closed in order to send the people to work in the fields using last century technology just to keep the population above starvation levels.

North Korea is littered with Stalinist style prison camps. Entry requires only perceived disobedience to the State. Few leave. Most die amid a strict regimen of brutality not witnessed since the Dark Ages. I suspect that even the Commandants of Auschwitz and Buchenwald would wince.

There are, however, few stories coming out of North Korea which tell the West about life "in the rabbit hole" to borrow from Alice's Wonderland from a personal perspective, until now. His name is Shin Dong-hyuk and his story is told by Blaine Harden.

Mr. Harden relates Shin's story in a well written book entitled "Escape from Camp 14" in which Shin tells of a brutality and obedience to the State which began at birth (potential parents are chosen and sex is permitted only by the guards, and only as a reward for obedience). Failure to obey results in immediate and often violent brutality; torture and executions are meant only to instruct. Failure to comply brings death. There are no friends; no family. Competition for food; for one's very survival, is immediate. One's life, outside its service to the State, is meaningless. One's individuality and indeed, one's sense of humanity, is crushed.

But "something" survived in Shin. A shimmer of hope; of humanity, and from that, a desire to escape to freedom, yet having no real concept of freedom or even of his own self, but burning desire that would not surrender; a will that would not be crushed. Harden takes us on Shin's compelling journey from a State sanction oblivious to his harrowing escape and finally, to his new life, and with it, his personal discovery of freedom.

Blaine Harden's Escape from Camp 14 is an excellent book of one man's refusal to give in or to give up to a system based on intimidation and brutality. Knowledge, it is said, is power. I strongly encourage everyone to buy a copy. The more people know the harder it will be for terror camps like this to continue to exist.
Posted by Paul Hosse at 3/24/2012 03:16:00 PM