Bernie Sanders and Democratic Socialism: The (Current) Ogre of The Right

As of this writing, Bernie Sanders is the current leader among the contenders for the Democratic Party's nominee for President and the one to face President Donald Trump in the fall. The last time Sanders ran for president, back in 2016, he was literally cheated out the opportunity to become his party's nominee by the "Queen-in-waiting", Hillary Clinton, along with a little help from her friends like Debbie Wasserman-Schultz, the (then) head of the Democratic National Committee (DNC).

Of course, Wasserman was later forced to resign as a result of helping to rig the nomination process against Sanders. Sanders was also denied a role in putting together the party's agenda for the upcoming election. Such was the deep seated fear of the Establishment Democrats of Sanders.

Now, with no Hillary Clinton to contend with, Bernie Sanders appears to be on a roll. So much so that the Establishment Right is already rolling out their "Oh God, he's a Pinko Commie Bastard" message. The truth of the matter is this. Bernie calls himself a "socialist democrat" and he's making all the usual promises designed to get attention and, hopefully, votes; especially from those who are sick and tired of being sick and tired of politics as usual.

The Right is doing its best to equate Bernie with every bogeyman imaginable. They are claiming that he's a full blown a rat-bastard Communist and neo-Stalinist. They've even tried to link his claim of democratic socialism with Fascism and Nazis (which actually fall on the far Right of the political spectrum, not the Left), but let's not confuse facts with some good old fashion mudslinging! Besides, this is politics. What does "Truth" have to do with it anyway? Some have even had the audacity to compare Bernie Sanders with that other lowdown Commie, President Franklin D Roosevelt (gasp!).

Yes, it's often alleged by the Right that President Franklin D Roosevelt was a closet Commie bastards too. Well, he was certainly called a "traitor to his class" by all well heeled society folks of the time, especially those on Wall Street. After all, he was tied to the Great Depression thanks to the actions (or inactions) of his predecessors, Calvin Coolidge and Herbert Hoover. It's true that he took steps to make Wall Street and the banks more accountable not just to the government, but to the public.

It's also true that he helped implement some dastardly "socialist" government programs like Social Security, funded pensions, enacted child labor laws, legalized unionization, backed the 40 hour work week, established wage hour laws and supported health benefits programs, unemployment insurance, and safe working conditions. He also created "make work" programs (the so-called "Alphabet Agencies" to employ many of the vast unemployed men and women. Oh the humanity of it all! Did this man not have a conscience? He was indeed a traitor to his class.

It's said that FDR was nearly as bad as his cousin (who was called a "mad man"), President Theodore Roosevelt, who broke up the monopolies of the Robber Barons (Antitrust Policy), his conservation efforts, and the Meat Inspection Act along with the Food and Drug Act of 1906; both of which sought to make clean up those industries so that people would get a healthy and consistent product. By today's standards, ole "Teddy" as he was called would also be called a RINO.

But much has changed since then. For example, we had numerous programs aimed at improving life for ordinary Americans. Many were called "socialist" at the time too but we wouldn't dream being without them. I'm talking about Truman's Fair Deal of 1949 which included the Housing Act which rid communities of slums and implemented urban renewal. He expanded Social Security. He desegregated the military (yes, that was actually called "socialist" in 1949). Eisenhower pushed through the Civil Rights Act of 1960 while Kennedy expanded it in 1962.

President Johnson declared war on poverty, which included work-study programs for students, expanded healthcare and education programs such as Headstart into areas hit the hardest by poverty (particularly in the Appalachian regions of Kentucky and West Virginia). There was the Civil Rights Act of 1964 which, in part, barred discrimination against in employment, sales, and housing. In 1964, Medicare and Medicaid were created. The Water Quality Act was passed in 1965.

Nixon backed the Consumer Product Safety Act of 1972 to create safety standards and ban products deemed unsafe for consumer use, and the list goes on. The point is that each of these programs were, in their day, each called "socialism" by the opposition, but can you imagine being without any of them--no unemployment, no Social Security; no laws protecting you from overtime abuse or your paycheck; living with unsafe working conditions, or legalized discrimination?

Yeah, there have been oversteps; programs which didn't work or work as originally intended such as Welfare which has devolved into a virtual "career" choice for some, or federal overreach into public schools (another notion which was considered "socialist" when first introduced), and especially forced busing which denied choice. More recently there have been attempts to limit gun and ammo sales or curtail free speech. None of these does society much good.

As for Bernie Sanders, he is a Democrat no matter what he calls himself. He must still operate within the confines of the rules established by his party. Secondly, the Democrats and Republican establishment work in unison to control the political process in this country. There are things they will and will not allow to happen. In turn, the two party duopoly and their politicians are controlled by a ruling Oligarchy of very wealthy and powerful corporations and individuals. They establish the political tone and direction in this country by controlling Washington's overall political agenda.

The Oligarchy is not in any shape form or fashion socialist or tolerant of socialism. They will not allow themselves to ever be dictated to by the government. Never. At present they exist in a partnership with government which is financially beneficial to each. They, through their hired guns---the lobbyists---help write legislation and then lobby (bribe) to ensure its passage. The bickering is mainly over whose agenda makes it through and who gets the largest share of crumbs (aka "pork"). Financially they underwrite the politicians and their campaigns. They control 90+% of the media and, therefore, control the message.

Politically speaking, most are pretty conservative fiscally, preferring a hands off approach from government with as little regulation as possible, while their opinions on social issues vary. Anyone elected to office must comply with the demands of the Oligarchy and, in turn, the very powerful party bosses, who act as gatekeepers, and committee chairmen and women. That includes Sanders should he get elected president. Any attempt to buck the Status Quo will be shut down.

If someone gets too far out of hand, the Establishment will force them back in line. That can be anything from denying you a seat on a particular committee or no "crumbs" to take home to the voters to destroying your political career or character assassination to working against you in your reelection (yes, a party will turn on their own if they buck the system too much). In a few cases, they've been known to take more serious steps to eliminate a problem.

Who is backing Sanders? He can't get elected on the dimes and dollars ordinary voters give. The Status Quo has been it virtually impossible for the average person to run for office and get elected. So, obviously Sanders has to have some big money behind him. Well, in his 2016 race his biggest financial supporters were the University of California, Microsoft, Apple, IBM, Amazon, Kaiser Permanente (a healthcare consortium), National Nurses United, Boeing, Intel, AT&T, as well as political action groups and wealthy members representing the Armed Forces, Veterans Affairs, U.S. Dept of Defense, and federal government employees.

However, his biggest financial donor was a company I had never heard of. It's named Alphabet, Inc. It turns out that Alphabet, Inc is a conglomerate of multinational corporations which comprise businesses like Google, a semi-secret R&D company named X Development, another R&D company which focuses on genetics and disease named Calico, Nest which markets smart home products, Makani Technologies which manufactures wind turbines, a private equity company, CapitalG, which concentrates on investing on emerging growth technology businesses. Not exactly what I'd expect to find donating in large dollar amounts to a "democratic socialist".

As expected, there were also a host of Left leaning organizations such as MoveOn and ad hoc groups like Progressive Voters of America. This go around, it looks like his big donors are the same groups as above in addition to UPS, Walmart, City University of New York, Starbucks, and Target. He's also getting money from the American Postal Workers Union, the Communication Workers of America, the National Education Association, Unite Here, Service Employees International Union, the American Federation of Teachers, and the Operating Engineers Union.

Again, not what I would expect for someone whose political campaign is based on doing away with free enterprise or government takeover of all existing businesses including Wall Street. I should also point out that several of these groups are covering their bases by donating to multiple candidates, but it appears that at this point anyway Bernie is getting the majority of their money. 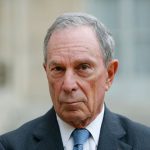 Speaking of which, Wall Street Democrats and other Establishment Democrats loath Sanders. Not that they actually expect he'd be able to pull off some sort of socialist coup once elected, but that he might be able to at least implement some form of restrictions on capital or push through some type of new social program. The big dollar Democratic candidate is multibillionaire Michael Bloomberg (because being a billionaire creates such a close connect with the working class I suppose). He's followed by another multibillionaire, Tom Steyer, then come Bernie, who is a mere millionaire.

Next is Joe Biden with a net worth of around nine million dollars. Rounding out the top five is Pete Buttigieg. It's worth noting that Buttigieg is not a millionaire, but he's not exactly poor either. He's basically upper middle class with a net worth of approximately $100,000. He earns just over $112,000 as mayor of South Bend Indiana. His husband, a middle school teacher, earns $152,000.

So, there you have it. Bernie, the millionaire. Hardly the stereotype of a democratic socialist, and making promises he knows damn well he can't deliver on. Meanwhile front groups on the Right are on the verge of a hysterical meltdown as they try to whip conservatives into thinking that Sanders represents Stalin incarnate (the likely goal is to help get a Establishment Democrat win the nomination). They've even gone as far as to claim that Sanders and his ilk equate to Communists, Fascists, Nazis, and that all of them are offshoots of Marxism!

Yeah, I'm perfectly aware of just how absurd that sounds, but then again, thanks to our "dumbed down" education system there are a lot of people who don't know history and will be believe just about anything. Want to know more? Check out my links below. As regular readers of A/O know, I always include source links with my articles.

What is Pete Buttigieg's Net Worth?