Meet Nancy Pelosi : The Bane of Conservatives and Darling of Liberals Everywhere

Mention the name of "Nancy Pelosi" to someone and watch their reaction. Typically you'll get one of two responses. The first might be a smile and sense of pride. Here's someone in Washington who has stood up to Donald Trump and Mitch McConnell; a real fighter for the common folk. The other reaction might be something between an attempt to repress a involuntary urge to hurl or a sneer and sarcastic grunt. There's not too much leeway in between.

Regardless of your opinion of her, she is without question one of the most powerful people in Washington irrespective of gender. She is the first female Speaker of the House (and second in the line of succession to the presidency behind the Vice President), and one of the longest serving Speakers of the modern era.

Nancy Pelosi tries to portray herself as a "defender of the common people"; someone who enjoys rubbing elbows with the "unwashed masses". She would have the American Public believe that she's no different from them; a political outsider and someone removed from the stench of corruption rising out of the cesspool that is Washington. But just how true is that portrayal of her? Is she really "one of us" or is that merely a carefully crafted persona; a mask which she wears when the lights and cameras are on? Who is the real Nancy Pelosi?

Nancy Patricia D'Alesandro was born in Baltimore, Maryland on March 26, 1940 to Thomas D'Alesandro and Annunciato M. "Nancy" Lombardi. His family came from Genoa, Venice and Abruzzo in southeastern Italy. Her mother's family was from Campobasso in south central Italy. When she came into this world, her father was the Democratic Congressman from Maryland, representing its 3rd district. He held that position from 1939 until 1947 (before getting into politics he was an insurance and real estate broker). From 1947 until 1959, Thomas was the Mayor of Baltimore (his son, Tom D'Alesandro III served as Mayor of Baltimore from 1967 to 1971). Young Nancy started out managing her father's book of who owed him political favors.

In 1961 Thomas was appointed by President Kennedy to the Federal Renegotiation Board (the board was created under President Truman as a government "watchdog" against exorbitant profits taken by government contractors. Its role was to review and renegotiate government contracts if it was deemed that the contractor's profits were excessive). He served in that role until 1969 (the board was dissolved in 1979). Thomas died in 1987. As for her mother, "Big Nancy" as she was then known, was active in politics behind the scenes, often organizing Democratic women's groups and known to be tough.

Nancy graduated from the Institute of Notre Dame, which is a private all-girl Catholic school. Like Bill Clinton, Nancy was infatuated with President Kennedy and even attended his inauguration in January 1961. In 1962 she graduated from Trinity Washington College, a Catholic college in Washington DC, with a BA in Political Science. At the same time she interned for Senator Daniel Brewster (D-MD). Brewster, who was elected in 1963, was the first Democrat to hold that seat since 1946; he previously served as a Congressman. She also worked alongside future House Majority Leader, Steny Hoyer (D-MD).

It was while attending college that Nancy met her future husband, Paul Frank Pelosi. They were married in 1963 (they would go on to have five children). About this time, Nancy and her new husband moved to San Francisco where Paul's brother, Ron, a successful businessman was elected to the City and County of San Francisco Board of Supervisors. Nancy began working with Phillip Burton (D-CA), the 5th District Congressman. Burton was an active opponent of the Vietnam War, worked to abolish the House Un-American Activities Committee", supported Bobby Kennedy's presidential run in 1968 and was closely tied with organized labor. He was a key advocate for funding AIDS research. However, it was his role in reforming existing House rules which earned him the designation as the "Father of the Modern Congress". Nancy was certainly cutting her political teeth with the right people at the right time.

Her mentor, Phillip Burton, died in 1983. The seat was filled by his wife, Sala Burton. However, she became ill and did not seek reelection. As a result, Nancy was designated as the heir apparent. She won the special election in 1987 and has held the seat ever since. Nancy's committee assignments were impressive right off the bat, serving on the Appropriations and Intelligence committees and on the Baltic States Caucus. In 1991, she became a founding member of the Congressional Progressive Caucus (CPC), an unabashed Left leaning issues group whose aim is to promote liberal policies.

In 2007, Pelosi was elected to Speaker of the House, once more establishing a Congressional "first". She held that powerful position until 2011 when the Republicans won a majority of the seats in the House. In 2008, she was elected as the Permanent Chairperson of the 2008 Democratic National Committee. After the GOP takeover of the House, Nancy resumed her position as House Minority leader. However, this was to be short lived. During the 2018 midterm elections, the Democrats were able to retake the House and in November, she was reelected to a second term as Speaker of the House which she continues to hold.

Pelosi is known her stances as a supporter of LGBTQ issues, marijuana reform and legalized medical marijuana (although NORML's deputy director, Paul Armentano, has said that Pelosi hasn't done anything to make that happen), and the removal of Confederate statues and memorials nationwide. She also opposes "enhanced" interrogation including waterboarding, supports amnesty for illegal immigrants and opposes any steps to secure the US-Mexican border. She is pro-choice and a strong advocate of "Obamacare". She has also voted against efforts to establish a Single Payer healthcare program (a replacement for Obamacare) while supporting increases in Medicare and Medicaid.

In addition, Pelosi is strong advocate of increased gun control laws including expanded background checks, restrictions on so-called "assault rifles" (she received a zero rating by the Gun Owners of America and a 7% rating by the NRA). She has said that climate change is the planet's greatest threat and has supported efforts to curtail offshore drilling and restrict the development of protected areas including national parks, forests, and wildlife refuges.

Nancy supported the 2002 "No Child Left Behind Act" and opposes the displaying of the Ten Commandments in public schools or buildings. She also opposes school prayer or saying the Pledge of Allegiance. She voted against the Balance Budget Proposed Constitutional Amendment Act of 1995 but supported increasing minimum wage in 2007. She also opposed the welfare reform proposals of both President Clinton and President George W Bush. Nancy was also against the tax reform bill signed by President Trump in 2017.

Of particular note is that Pelosi is a supporter of "PRISM", a NSA run program designed to gather information on Americans via the internet and other forms of electronic communication (without bothering with a warrant I might add). The program began in 2007 as an offshoot of the "Patriot Act" under President George W. Bush and extended by President Obama. It is currently administered by the secret U.S. Foreign Intelligence Surveillance Court (FISA) which was famously exposed by Edward Snowden.

Nancy Pelosi has had the benefit of coming from a strongly entrenched politically family. She has used her family connections to her obvious benefit, which has enabled her to rise to the highest levels in politics; hardly the moniker of an "outsider". The district she represents, California's 12th Congressional, which includes most of the Bay Area and about 4/5 of Greater San Francisco, is considered the "safest" district in America for Democrats with a 80% Democrat registration. So, while Pelosi has completed 17 terms in Congress, it's likely that she'll be able to hold on to that seat for as long as she wants it.

Finally, we come (as always) to the money. Nancy Pelosi is listed as the 29th wealthiest member of Congress with a net worth of $120 million dollars as of 2018 (her government salary is $223,500 dollars a year). Not too shabby Nancy, but far from being one of "common people". By comparison, her nemesis in the Senate, Mitch McConnell (R-KY) has a net worth of "just" $30 million. It's worth noting that Pelosi's biggest campaign donors come from Wall Street, Big Phama, the real estate industry (mostly commercial developers) and some very wealthy individuals. Not sounding particularly "blue collar" to me, how about to you?

As an aside, in researching information for this article I came across a telling letter written and signed by many of these super wealthy individuals and heads of some very powerful corporation which stated in effect that any attempt to remove Pelosi from her position as Speaker of the House would have serious consequences. These same individuals and corporations also give generously to the Democratic National Committee (DNC) and they are closely connected with others who also give big. 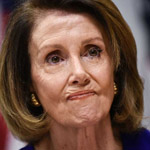 The letter, directed to the DNC and key leaders in both the House and Senate, stated that they like the way Nancy does her job and the access as well as the support that she provides them. Thus, any attempt to oust her would result in a major reduction in the amount of financial support they give to the DNC as well as to Democratic candidates direct. In short, do as we want or we'll cut you off. So, here we have concrete proof of the power and clout of the ruling Oligarchy on full display. They have, in effect, selected the third most powerful political position in the U.S. No doubt something similar has been done on the Senate side and directed to the RNC as well. I'm sure their desires for other matters have been made clear as well. This is Senator Mitch McConnell's definition of "free speech" at full throat.

So, there you have it. Everything you wanted to know about the bane of conservatives everywhere. Perhaps though you can see why those on the Left particularly idolize her. She is a highly experienced political operative with an ability to get things done. However, she is not, by any stretch of the imagination, "one of the people". She is the quintessential political insider. She is part of the top 5% wealthiest in the United States and there is no doubt that Nancy Pelosi is part of the patrician class.

Nancy Pelosi Victory Fund and the Wealthy Donors Who Own the Democratic Party
'Naive and self-destructive': Big Democratic donors back Nancy Pelosi and warn that funding will be cut in half if she's pushed out

Just because you don’t agree with her on issues, as you are clearly a strong conservative, doesn’t make her a “bad” person. The great majority of our politicians are very wealthy. That doesn’t necessarily mean they are not sympathetic to the “unwashed masses”! When are you going to do an “unbiased” blog on our esteemed senator from our state?