The Assault on the 2nd Amendment Why is the 2nd Amendment under such a pervasive and aggressive assault? So far 26 State Legislatures plus the District of Columbia have passed 67 sweeping, and some would say, severe restrictions on the purchase and sale of firearms. The most recent state was Virginia, when, in July 2019, the newly elected Democratic Governor, Ralph Northham, asked the state legislature for tighter gun control laws.

At first, nothing much happened. The Republican controlled legislature meet for all of 90 minutes before adorning for summer recess. However, eventually the governor got what he wanted...and perhaps more than he bargained for following the Democratic takeover of the state legislature in November. This was the first time since 1993 the Democrats had full control of the House.

Eight new laws were passed pertaining to gun control which will in effect the first of the year. One requires expanded mandatory background checks on all gun sales or transactions. That includes any purchases of used guns, be it at gun shows, flea markets, garage sales or private purchases. It even includes gifting a firearm to anyone, including family members.

In addition, handgun sales will be limited to one purchase per month per individual. Buying more than one handgun in a 30 period could cost you---up to one year in jail and a $2500 fine. Anyone wanting to purchase more than a single handgun within the 30 day waiting period has to apply directly to the Virginia State Police and undergo a more extensive background check. The only exemption is to licensed gun store owners.

Another of the new laws bans any so-called "dangerous" weapons or accessories including weapons labeled as "assault" rifles, silencers, bump-stocks (as was allegedly used by the Las Vegas gunman, Stephen Paddock, who killed 58 people attending a concert and wounded another 851 in 2017), high capacity magazines ( greater than ten rounds). The new law doesn't specifically define what constitutes an "assault" rifle but it will likely be any rifle or other firearm which has a military appearance, is a semi-automatic, has a detachable magazine and fires a high caliber round such as a AR-15 or a Tec-9. However, it should be pointed that there a numerous designs not classified as an "assault" styled weapon which can meet or exceed these requirements which commonly used for hunting or target shooting.

Other proposed laws are more common sense oriented such as reporting a missing or stolen gun to police within 24 hours of discovery. Failure to do so could result in a fine up to $250.00 per gun. Another law makes it a Class 6 felony to leave a loaded and/or unsecured firearm around anyone under 18 years of age (the current law, a Class 3 misdemeanor, set the age at 14 and carries a fine up to $500). A Class 6 felony carriers a penalty of one to five years jail time and a maximum fine of $2500. The aim of the law is to prevent adults from "recklessly" leaving a unsecured loaded gun, such as having no trigger lock, within easy access of juveniles.

Two other bills allow law enforcement or the courts to "temporarily" seize the firearms who anyone who is under a final protective order as well as anyone who is deemed by a court to be a threat to themselves or others, typically known as a "red flag" law. The intent is, of course, to protect those who are in some sort of abusive domestic situation as well as to prevent someone who may have psychological problems (which may or may not be related to prescription medication, drug or alcohol use) from harming themselves or others.

A Washington Post-Schar School Virginia Poll from the week of September 25th found that 58% of Virginians supported the laws calling for stricter gun control while 91% said that tighter gun control was important to them (all those surveyed were registered voters). Nevertheless, not all is well in the Old Dominion State. Thus far, approximately 80 counties have declared themselves a "gun sanctuary" and have promised to ignore the new laws. Several local law enforcement officers have stated that they would "deputize" individual gun owners if they have to in order to sidestep the new laws (law enforcement is, naturally, exempt from some of the laws such as the restrictions on the types of weapons one can own, limitations on the clips and magazines, and number of purchases).

Both county officials as well as law enforcement have gone on record as stating that they were elected to uphold the Constitution of the United States and that these restrictions are in violation of their oath. The Virginia Governor has stated that he would ask the Virginia State Police or even the National Guard for assistance if local law enforcement refused to comply. This statement was backed by Virginia Congressman Donald McEachin (D).

Supporters of the new laws are flabbergasted. Many have stated that changes in gun control legislation were effectively on the ballot; that the Democratic candidates had made it a key part of their campaigns. Thus a vote for a Democratic candidate was a defacto vote for stricter gun control laws. However, those in the outlaying counties don't quite see it that way. They believed that any changes to the existing gun laws should be publicly debated and voted on separately; not decided solely along partisan lines.

As Virginians start choosing up sides, other states have enacted similar laws as I previously mentioned. California, which already has some of the strictest gun laws in the country, recently saw its governor, Gavin Newsom (D), sign into law another 15 more this past October. Similar to Virginia's, these new laws restrict the number of gun purchases someone can make in a month, set limits on the magazine capacity, prohibits the sale of semiautomatic centerfire rifles to anyone younger than 21 years of age among other changes. 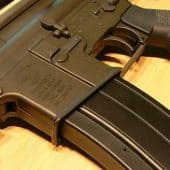 California already has a "red flag" law on the books which allows the courts to issue a "gun restriction order" and allows law enforcement to remove firearms from anyone deemed a threat to themselves or others. The Democratic governor also signed a bill extending the gun restraining order from one year up to a maximum of five years.

Vermont, which has relatively liberal gun laws, passed legislation to implement a "red flag" law. It would allow any firearms to be removed from anyone deemed by a court to be a danger to themselves or others. They also passed bills which would prevent anyone from bringing weapons into any K - 12 school, expanded background checks, and limiting magazine capacity.

Meanwhile, several states passed not just expanded background check laws, but also banned high capacity magazines and clips, bump stocks, and "red flag" laws (which included domestic violence restrictions), tighter conceal and carry laws, and anti-gun trafficking legislation. As an aside, despite some thinking this attack on guns is sort of Democratic witch hunt, it should be that noted that of the states where these new laws took affect, 14 occurred in states with Republican governors.

According to a October 2019 Pew Research Report stricter gun control laws have gained in popularity among Americans since 2017. In March of 2017, about 30% of those surveyed said that the amount of gun legislation was about right. 18% said it was too strict, and about 52% thought it should be stricter. 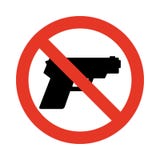 By September 2019 that had changed. 28% thought the gun control was at about the right level while just 11% thought it was too strict. However, some 60% said that gun control needed to be stricter. The poll also revealed that 80% of Republicans thought that 2nd Amendment rights were more important than gun controlled compared to 21% of Democrats. Interestingly, there was bipartisan agreement when came to barring those with mental illness from owning guns; 91% of Democrats and 92% of Republicans.

Perhaps one reason is that since Columbine in 1999, there has been 61 mass shootings in the U.S. resulting in over 667 killed and more than a thousand wounded. It seems that each incident was just a bit worse than the last. But this also begs the questions, if more people had been armed could they have prevented much of the carnage by stopping the killer(s) sooner or would it have made little or no difference?

The level of education also seems to factor as well when it came to gun control. 63% of those with four year degree favored increased gun control compared with 48% without a college degree. In fact, as one's educational level increases, so does their support for increased gun control. Along gender lines, 53% of men favored gun ownership rights compared to just 42% of women. Perhaps not surprising is that Millennials and Gen Z both strongly favor stricter gun controls laws compared to Babyboomers and Gen Xers.

The primary reason for gun ownership in this country is self protection. As the expression goes, "seconds count, the police are only minutes away". Everyone has the right to protect themselves and their loved ones. They also have the civic, if not moral, responsibility to protect others if that can be done relatively safely. People also own guns for other reasons such as hunting or for sport. Some are simply collectors, especially of historical arms. But the reason our Founding Fathers inserted the 2nd Amendment had little to do with hunting or sport, and nothing to do with collection. 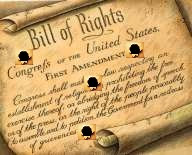 The 2nd Amendment was included in the Bill of Rights as a means for the citizens of this new nation to protect themselves from a government running amuck. They had just finished a bloody and costly war with the British Empire. They deeply mistrusted the government. They understood intimately what happened when you had a government asserting its control over the population. The citizens required the means to fight back on equal footing.

The Founding Fathers gave us the means to remove that government if necessary. That was the real purpose behind the 2nd Amendment. In today's political climate, I doubt there are many on either side of the political divide who do not see the potential threat. After all, we're no longer the democratic Republic our Founders intended, but an Oligarchy instead; a neo-fascist corporate/government surveillance state on the verge of becoming a full blown police state. We need to remember this as we continue to debate the need for further restrictions in our inherent right to own the means to protect ourselves, our families, and our country.

I question the statistics quoted. Not that those were the numbers provided, but the parameters of the polls, the pool the poll was taken from and whether the poll itself was truly neutral so that the responses were not skewed one way or the other.

It amazes me that any of our Constitutional rights could be assaulted like the Second Amendment. After all, these rights were God given and simply acknowledged by the Constitution (and Amendments).

I am a veteran, former LEO and a recipient of a Bachelors Degree. Male, Christian and registered democrat. I support all of our Constitutional rights equally. While I refer to myself as a Kennedy Democrat, I use that term to mean I am a stout patriot and love my country. Accordingly, I would resist any assault upon my rights by any means at my disposal.