There's been so much in the news lately about so-called "Dreamers" and DACA, illegal immigration and so forth (DACA stands for "Deferred Action for Childhood Arrivals" and was aimed at buying them additional time to become citizens and to make the process easier). Some even want to hold the US federal budget hostage over it'; delaying government payments to disabled and retired veterans, people on Social Security disability, low income families or individuals getting their WIC payments, not to mention no unemployment benefits, funding for school meals and other programs.

Of course, no payment for the US Military or funding for active duty or veterans needing surgery or medicine, which may be the worse slight of all. Imagine these men and women fighting and risking their lives, and not getting the near poverty level wages they earn the hard way. All this over individuals who are here illegally, either as the result of their own self-interest and disregard for our laws, or was it because they were too lazy to take the steps necessary to become legal? These individuals, somehow, seem to believe that although they've known for decades about their status, seemed to think that if they did nothing; took no steps whatsoever, not even the baby steps provided for in Obama's DACA program, they would just be waved through with a wink and a nod. I guess they were hoping that Hillary Clinton would be coroneted as planned, and they would be rubber stamped.

Now we're seeing protests, often with their faux-indignation, as if they all happened suddenly; a big ole surprise. I love some of the signs that are manufactured for these organized spontaneous events such as "No Person Is Illegal" or simply "I Support Immigration" among others which all essentially say the same thing. What is so interesting about these signs is they're lies of omission, aimed at getting people to accept them at face value in order to (hopefully) persuade people to change their minds or think (even for a moment), "hey, I agree with that". So, let's think about these signs for a moment.

First off, they are, at least on the surface, correct. Let's take the first one---"No Person is Illegal". Well, that's actually pretty true. No human being, at least in the West, is "illegal". Perhaps the closest thing to being "illegal" was slavery, which officially ended in the West close to 200 years ago (1820/1864 in the US, 126 in France, 1833 in the UK, 1818 by Spain, Holland, and Portugal). So, no person is illegal. However, an individual's actions may be illegal if they don't comply with existing laws. That's why we have a legal system, complete with law enforcement, courts, judges, bailiffs, and a jail or prison system. It's also why we have legislatures at the state and national level---to create laws.

When someone violates one or more of those laws, it's a crime, and crimes come with various forms of punishment such as fines or incarceration. In the case of immigration, it includes deportation. Every country has immigration laws, which are designed to protect and secure their borders for a wide range of reasons. Borders are part of what establishes a country's sovereignty. There are, of course, exceptions, such as escaping political, racial, ethnic, or religious persecution. Occasionally, exemptions are given for economic or health reasons. But regardless, the reasons must be compelling and irrefutable; that is, there must be external proof.

Most people who come to the US illegally exhibit none of these prequalifications. They just simply don't want to wait in line with those who are doing it legally. Of course, most of these individuals aren't coming here illegally in order to become American citizens. In fact, their illegal status precludes their ability to do so. So why are they here? Basically, for a job. Where many of these people come from, there are few good paying jobs, and competition is often stiff due to the large populations (not to mention subsequent corruption needed in getting and keeping a job). As an aside, the countries where many of these people come from lack a large or stable middle class. Why you wonder?

While the reasons are numerous, the primary reason stems from the early upper class and church authorities (mainly Roman Catholic in Latin America and parts of Asia and Europe) desire to keep the lower classes essentially poor and uneducated, and thus easier to control while leaving them in charge (historically, the middle class has come from the more successful lower merchant class, which also became more educated, and elevated their family's circumstances). Those who decide to violate the law, as I previously said, mainly come for a job. However, they again don't go through the process of obtaining a work permit. They, therefore, seek to work "under-the-table", either using a stolen or forged Social Security Number when necessary, or simply taking jobs which pay cash. While this is illegal from the employer's side too, some are more than willing to take advantage of these individual's situation. They can lie about withholding taxes (and possibly pocketing the money), force them to work long hours without a break, avoid clean, safe, or healthy working conditions, and pay them next to nothing, not to mention treat them as near serfs. What are they going to do? Go to the police or other authorities? Where many of them come from the cops are worse than the crooks; as often as not, they're one in the same! Of course, if caught and convicted, employers can be fined and even arrested, although this rarely happens; many times, especially in some industries like hospitality, construction, and horse-racing, its gets by with wink and smile from the politicians, employers, unions, and the police.

Another part of this conspiracies of lies, are various social (and often religious oriented ) groups who believe they have a right or duty to ignore laws, and provide temporary shelter, clothing, food, and even help with finding them jobs, housing, and showing them how to violate laws, and guidelines in order to get taxpayer funded social services. Of course, this is illegal too and carries its own punishment. So, while no one is "illegal", their actions are, and often those actions affect others who are dragged down in the widening web of lies, from those attempting to do the right thing and are forced to wait even longer, to shady employers and misguided social zealots.

Now, what about the other signs like "I Support Immigration"? On the face of it, signs like these makes perfect sense. America is a nation of immigrants; we are a country built on immigrants. Perhaps no nation on earth has had such diversity other than ancient Rome. One could argue quite convincingly that every nation, ethnic group, race, and religion is represented in America. In 2016, there were 43.7 million first generation immigrants living in the US. If you include their US born children, that number increases to 86.4 million, or 27% of the total US population. Most came from India, followed by China and Hong Kong. Mexico and Cuba round out the top five according to the Migration Population Institute's February 8, 2018 report.

Of course, these are individuals who did it the right way, so there's obviously no bias against immigration, and certainly not any based on religion or skin color. However, like every nation, the US operates on a quota system (PEW Research has an interesting article on the history of US immigration which I've linked below). Now, what about illegal immigration? The two best sources of information are the Department of Homeland Security and FAIR (Federation For American Immigration Reform). Best estimates place the number of illegal immigrants at around 13.5 million (this is in addition to the numbers above, which represents legal immigrants). That number doesn't include the approximate 4.2 million "anchor babies" or children born in the US by illegal immigrants, but does include some 800,000 DACA recipients). The reason why the number isn't more precise is simply because those here illegally don't want to counted! So, what does this cost us? You'd be surprised.

In terms of our tax dollars, illegal immigration costs US taxpayers an estimated $134.9 billion dollars (federal, state, and local money). Also, bear in mind that the average American pays 30% of their income to taxes. Here's another factor to look at, crime. According to the Federal Bureau of Prisons, just over 1/4 of all prisoners being house in federal prisons are here illegally, with just under 300,000 incarcerated on state and local jails. That's about $1.6 billion for their upkeep at the federal level and $8.6 billion at the state and local levels. Most are held on violent crime charges by the way.

Let's also not forget that unlike legal immigration, where immigrants undergo a health screening, illegals do not. Therefore, we have many entering this country who are infected with diseases and illnesses which we haven't seen in decades, such as various infectious diseases (like tuberculosis, measles, typhoid fever), plus HIV/AIDS, STDs, severe drug and alcohol addiction, and mental illnesses. Simply put, illegal immigrants put ordinary Americans, especially seniors and our aging Babyboomers, children, and those with compromised immune systems at high risk (I've included a really interesting article from Psychology Today on the topic below).

So, are Americans opposed to immigration? Clearly not; at least not based on government or independent statistics and research at least. I think it's obvious that most of us support immigration too, as long as it's legal. Race, religion, or ethnic group are rarely a factor for most Americans. However, we do have an issue with those who willfully decide to ignore our laws; we have a real concern with supporting those who pay little or no money back into our social safety net; and we have a serious problem with those who commit crimes. 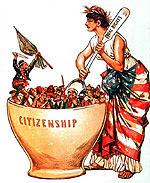 This country was intended to be a "melting pot" where all cultures blend together in order to create something new---"E Pluribus Unum" or "Out of Many, One" as it says on our National Seal. However, it is language which binds us together; it's the thread which binds the nation, and that thread is English. Without it, we become a hodgepodge of disunited peoples. In no country will you find the native population purposefully surrendering its identity to a new culture, religion, or language. In no country will you find a country willingly default on its sovereignty. America is no different.

Timeline of the abolition of slavery and serfdom

MPI: Frequently Requested Statistics on Immigrants and Immigration in the United States


PEW: How U.S. immigration laws and rules have changed through history

Psychology Today: Do Illegal Immigrants Pose a Health Risk to Us All?