Replacing Your Driver License With A National ID Card: The Day of Big Brother Has Arrived

"Ihre Ausweise bitte"! These were once words that could make the bravest man or women tremble in fear, for they were the words used by Nazi Germany's feared Gestapo, or secret security police. Often, ordinary Germans and others under German occupation, would be randomly stopped and ordered to produce their identification papers. These papers were required from anyone at any time, but mainly when traveling. It appears that many of us may soon be hearing the English equivalent soon, and for those without their proper "identification papers", prohibited from traveling by plane, bus, or train anywhere where we would cross state lines.

It appears that there are several states which are non-compliant with recent changes brought about by Homeland Security (which I usually call "Reich Security", which as you'll read shortly, may be a better description). Beginning on January 22, 2018, individuals from nine states will be prohibited from traveling across state lines with their photo driver's license as their only form of ID. Residents from Oregon, Maine, Montana, Kentucky, Minnesota, Oklahoma, South Carolina, Missouri, and Pennsylvania will be required to produce a second form of photo ID to pass new security measures being implemented by the Transportation Security Administration (TSA), which is overseen by Homeland Security. 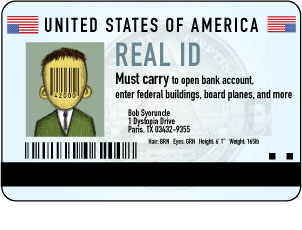 According to TSA officials, this second form of identification can be a military (or VA) photo ID, passport, or permanent resident card with a photo. The reason, we are told, is the result of the REAL ID Act of 2005 which requires that all federal agencies must comply by only accepting photo identification which meet specific minimal requirements established by the ACT. Those requirements include have a color photo of the individual; the incorporation of "anti-counterfeit" technology onto the card which would prevent any alterations to the card, and a background check on everyone issued one of these "enhanced" driver's licenses. I guess we should be grateful we're not required to pee in a cup or submit a DNA cheek swab! In short, you're freedom to travel is being restricted; not so differently than the way totalitarian governments have been doing it.

Many of us "oldsters" remember a America where freedom could be defined by our ability to travel anywhere we wanted to anytime we wanted. It was touted in just about every bus, car, train, or airline commercial or in countless magazines. It was one of those selling points the US used to publicize to the world, especially those behind the Iron Curtain. Well, apparently not anymore. According to the change, those in the nine "non-compliant" states will not be immediately affect (the remaining 24 states plus Washington DC are currently compliant), although TSA recommends residents obtain a passport in case they intend to travel before their state legislatures pass appropriate legislation. However, their respective states must be brought into compliance by 2020 (maybe we'll get "lucky" and we can simply have chips implanted which can be updated on a regular basis as needed). So, just what is the REAL Act of 2005 anyway?

The 2005 REAL ID Act was passed in response to the 9/11 terrorist attack, as well as other domestic terror attacks in order to provide a more enhanced and secure form of personal ID than a simple state identification card or a driver license. These new ID cards must include the individual's photo, full legal name, current physical address, gender (which is going to be interesting in California), date of birth, license number, bar code, and signature. It will also include, height, weight, disability and veteran status. They must also be tamperproof. New applicants will also have to provide proof of citizenship, legal authorization (ie: a "green" card), or a birth certificate, along with a second form of ID which includes a photo , full legal name, and date of birth. Finally, the REAL Act requires that all states must share its database of licensed drivers with all other states, as well as federal agencies (hence the reason these new ID cards are being called "National ID" cards).

I can't help but think of the Enabling Act of 1933. For those of you unfamiliar with the Enabling Act, this was piece of legislation was enacted shortly after the election of Adolf Hitler as Chancellor in 1933 following the burning of the Reichstag (the Reichstag is the German version of Parliament or Capitol Hill). The newly elected Nazi government declared that the fire, which nearly totally destroyed the Reichstag, was the result of Communist backed terrorism (by sheer dumb luck, a mentally unstable young man by the name of Marinus van der Lubbe was found wandering through the rubble, identified himself as both a Communist and a Jew, "confessed" to the deed). As a result, the Enabling Act was hastily passed to clamp down on all those deemed as possible terrorists or sympathizers, as well as those deemed "enemies of the state".

Thus began the building of "detainee" camps for "re-education" and "rehabilitation" which, of course, ultimately became concentration camps. Initially this included common criminals, prostitutes, junkies and drug dealers, drunks, gays, as well as opponents of Nazism such certain members of the clergy, political activists such as those who were anti-Nazis or pro-democracy, and union leaders. In short order, it expanded to include Communists, Socialists, Anarchists, and so forth. It would end with Slavs, Jews, and Gypsies. Instead of rehabilitation, there was extermination.

Obviously I'm not saying anything like that could or would happen here (at least since our imprisonment of Japanese-American citizens in 1942 following the attack on Pearl Harbor on December 7, 1941). However, it was out of the Enabling Act that arose the Gestapo and that dreaded phrase, " Ihre Ausweise bitte"---"Your identification papers please" . It also gave certain Reich agencies the right to detain, arrest, and hold individuals without charges for an undetermined time at their discretion. Even next of kin need not be notified. Sound familiar? It reminds me a lot of the Patriot Act out of which came the REAL ID Act.

For those of you who think I may be "over reacting", I can understand that. However, I assure you that I'm not. I'm simply pointing out similarities, and explaining what this REAL ID Act will mean for not just the traveling public, but for all of us since it will be a de facto national identification card. I was only half joking when I said earlier that I was surprised that it didn't require that we provide a sample of our DNA! In truth, I fully expect it will come with a tracking devise implanted or encoded in it, and why not? Our smart phones do. Our cars do, along with other electronic items. Why wouldn't this too not come with tracking technology? Of course some believe, and perhaps rightly so, that this type of technology combined with a National ID card will not only cut down on the possible terror attacks, but also make it more difficult for illegal immigrants to arrive and stay in the US.

There is already serious talk from the business and technology communities about microchip implanting. In fact, some companies have already begun the process. As usual, it started as being purely voluntary. Those who stepped up first got something trivial like a coffee cup or day off (as an aside, studies have shown that Millennials have shown a willingness to surrender some private information for these little trinkets). Then, slowly, it became "strongly" suggested and finally a job requirement (similar to the way they did direct deposit I suppose). The data being stored is primarily work related--- name, date of hire, entry access, etc. In time, it will include your complete financial and credit history, as well as your military or criminal records, medical and private information. Maybe even your DNA history will be added; what you're allergic to or what genes you carry that make you susceptible to certain cancers or heart conditions (which obviously could affect your employability since it could impact your cost to the company in days lost and insurance costs). Like it or not. Accept it or not. The day of Big Brother has arrived.

The REAL ID Act: Are You Ready for a National ID?

TSA to stop accepting some states' drivers licenses in 2018