Hillary's New Book "Stronger Together": A Would-be Caesar in a Pantsuit? 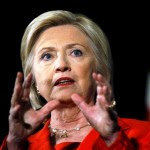 Not that I am a particular fan of Hillary Clinton, but the former First Lady and Secretary of State released a new book recently entitled "Stronger Together"; a fanciful trip down "what if" she had won the election and some of her policy decisions would have been . While she really needed to get over the fact that she didn't win and politics is not a static sport, so much of her statements are strictly speculative. Nevertheless, Hillary does go after her Democratic opponent, Bernie Sanders, pretty hard even though she helped rig the Primary to ensure that she handily beat the self-defined "democratic socialist".

In addition, even after securing the Primary victory, Clinton and the head of the Democratic National Committee (the DNC, like its counterpart, the RNC, runs the internal party machine), Deborah Wasserman-Schultz worked to keep Sanders' supporters from having any input into the party platform or from voicing their anger over procedures (Wasserman was fired from her position but was immediately hired by the Clinton camp). Ironically, her replacement, Donna Brazile, would be fired too. She was accused of feeding Hillary debate questions prior to a debate with Trump. Although the Sanders' camp would file a class action lawsuit, Federal judge William Zloch, would latter rule that the party could do as it pleased with respect to the primary; even rigging the outcome.

Think about that for just a moment. Let that statement simmer in your mind for just a minute. Bernie Sanders, a duly filed Democrat candidate filed to run in the Democratic Primary. He campaigned hard throughout the United States. Whether you liked his proposed platform or not (and many Millennials did), was denied a fair shot so scared was the Clinton camp and her supporters within the DNC that they were willing to rig specific primaries to ensure that Hillary won, and won big. The hope, of course, was that Sanders would get discouraged and drop out. Sanders didn't, and in fact, his message hit a cord with voters, especially younger voters. Meanwhile, Hillary's camp was hoping (to say the least) that one of the pre-vetted and pre-scripted Republican candidates would finally take out "the circus clown", Donald Trump.

The actions by the DNC, and reaffirmed by a federal judge, is that our votes aren't all that important. The party ultimately decides who it wants and then gets behind that individual. In this case, it was Hillary. In the case of the RNC, they clearly didn't want Trump. However, "The Donald" was clearly the strongest candidate based on his ability to attract crowds to speaking engagements and generate voter turnout. Although the RNC did entertain the idea of throwing out a Trump Primary victory and selecting a candidate through its executive committee (some of you will recall that Mitt Romney offered his "services" while this was being discussed), the RNC decided to hold its nose and allow Trump to become their nominee. Why? Because the Trump camp had dropped several not-so-subtle hints that their candidate would run as third party if the RNC pulled any shenanigans. The RNC knew that given Trump's popularity and ability to self-finance, they simply didn't have a candidate strong enough beat Trump. Besides, a divided conservative ticket would all but guarantee a Clinton victory in November.

It would also convey the message which the Democrats were struggling with, namely, that what the voters wanted didn't count. Both parties had sought to protect the illusion that voters still mattered, even though both parties include the provision in their by-laws to ignore the voting results and select a candidate of their own through the executive committee. Given the mood of the country, this may attract even more support for Trump, while on the Democrat side, they were hoping this would be downplayed. It wasn't, and accordingly, Sander's camp filed suit only to lose as stated before.

On a related matter, one that's sure to play a central role in any story about or by Hillary, is Benghazi. I'm sure everyone knows the story of Benghazi by now. Benghazi has gone down as one the worse attacks on the United States, not because of the number killed (there were four individuals who lost their lives), but because it was one of those situations which should not have happened, both before and the shameful cover-up by the Obama Administration, and especially by the State Department, afterwards. The official line was that it was a unplanned random attack by a small group of Libyans on the American Embassy in Benghazi. What, we were told, raised their ere was an obscure film with a anti-Islamic message. Of course, this was a complete fabrication created by Hillary's staff. 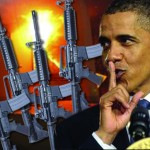 Over time, through bits and pieces, as well as the occasional admission, the public was able to piece together what really happened, despite the efforts of the Obama Administration. We now know for instance, the Hillary had (illegally) authorized gun running through the embassy, which was also done without the knowledge of Ambassador Stevens. The guns, as well as military intelligence reports, were run under the cover of the embassy to aid rebels in Syria and possibly, on to other groups in Afghanistan and perhaps elsewhere. We've also learned that the presence of radicalized Muslim fighters had been increasing over the preceding weeks. We learned that the security forces recruited locally were of dubious loyalty and that US personal were unarmed (weapons and ammo were available, however, they had been locked away in a secure vault). Repeated requests for additional security personal were largely ignored or declined by the State Department, as were requested for US personnel to be armed. As for the "obscure movie", it was so obscure that it hadn't even been shown yet. In fact, it had been produced by an independent producer who was strapped for money and was unable to finish the project. 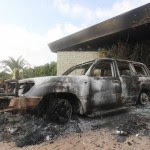 During the attack itself, which lasted approximately seven hours, repeated requests for assistance were denied, including permission to evacuate US embassy personal to a more secure area or to the nearby airport where a charted plane was prepped and ready for takeoff. US military forces were monitoring the situation as well, and despite repeated requests to come to the aid of Ambassador Stevens and other members of his staff, were instructed to stand-down. We've learned since that the Navy had fighter planes fueled and armed and only an hour or less out from Sigonella Italy, as well at bases in Avlano Italy (U.S. Air Force and NATO) and Souda Bay Crete (US Navy).

The Army too had fighters fueled and armed sitting on the runway waiting for permission to launch. At the time of attack, we learned that two CIA operatives at nearby communications station within the embassy did had some light firepower to hold off the attackers briefly. Meanwhile, one of the individuals was "painting" targets in anticipation of a rescue which never came. We have since learned that flying in the vicinity was an AC-130 returning from a mission (an AC-130 is an ultra modern version of what we used to called "Puff the Magic Dragon" AC-47). The pilot had also been monitoring the situation and requested permission to lay down suppression fire until the cavalry came. He too was ordered to leave. In addition, the US had drones flying overhead during the attack. In the end, Ambassador Stevens, Glen Doherty, Sean Smith, and Tyrone Woods were left to die. Rear Admiral Charles Gaouette, Commander of Carrier Strike Group 3 and US Army General Carter Ham, Commander of United States African Command, were both relieved of command by President Obama for their insistence on sending a relief operation to the embassy on the recommendation of Leon Panetta, Secretary of Defense.

There was obviously so much more to Clinton's tenure as Secretary of State and, of course, to run for President. However, even when taken as a whole, her record isn't great. Something happened to Hillary Clinton since the days when she was a bright idealist; one filled with passion for women's and children's issues; of when she served as an aide on the House Judiciary Committee's Impeach Inquiry Staff during the Watergate Hearings. Somewhere along the way, she was corrupted by the very system she, and other of our generation, sought to change. Her idealism became cynicism and ultimately, perhaps the end really did justifies the means. Perhaps the hand of History will write that Hillary Clinton was another reminder of Lord Acton's maxim that "power corrupts and absolute power corrupts absolutely" . I think her book, and any that follows, will be her attempts to rewrite history in order to justify her actions or perhaps her lack of actions not just for posterity's sake as much as for herself. I believe too that it shows how far government has strayed from the ideals of our Founding Fathers.

Court Concedes DNC Had the Right to Rig Primaries Against Sanders