Reading the Signs: Understanding the True Meaning of Protest Signs

Recently we had "Day Without Immigrants" protests & marches. Not unsurprisingly, there were signs like "Immigrant Rights" or "Humans Aren't Illegal". Whenever we read an article or see a news report, you can bet that most are using terms like "undocumented immigrant" as a matter-of-fact. Most of us don't even notice it anymore, even though that they are not simply random words. They are designed to create a subtle psychological impact on us and how we process the situation being presented. The use of slogans and phrases to influence or manipulate how people think and react to a given event is an ancient art and an integral part of warfare just as much as marketing, it's counterpart, is in the consumer world. It's key to presenting a specific perspective or creating a certain attitude, be it toward an enemy on some battlefield or developing brand loyalty. It can be used to sway people toward or away from some objective, such as a manufactured future enemy just as well as why one brand is healthier or brighter than its competitor. During wartime, propagandists often search for powerfully emotional themes and vulnerable groups within enemy ranks and the civilian populations. They, in effect, are searching for a weakness in the enemy society that allows them to exploit and divide their forces.

Bolshevik leader Vladimir Ulyanov, better known as "Lenin", was strong proponent of the use of slogans, before, during and even after the revolutions of 1905 and 1917, including "Peace Bread Land" and "All Power to the Soviets" ("soviet" is the Russian term for worker committees). According to Lenin, slogans were designed to persuade people to join your cause, while at the same time, providing a simple, short, and easily conveyable explanation of what and why you were doing something. The slogan, "Peace Bread Land" for instance used just three words to define its domestic policy. "Peace" referred to withdrawing their troops from the Eastern Front and ending its war with Imperial Germany and the Austro-Hungarian Empire during World War I. "Bread" of course stated their goal of providing food to the millions of starving Russians , and "Land" implied giving the peasants the land (or at least some of it") on which they had been toiling as serfs for the wealthy. The slogan, "All Power to the Soviets" was directed mainly to factory workers, but also to the ordinary soldier and sailor, as well as the peasants. It called for the creation of worker's committees ("soviets") which would seek to manage the needs of each. Naturally, it didn't matter whether they, the Bolsheviks, actually intended to carry through with their pledge or how they intended on even doing so! It's only objective was to persuade in a easily understood and memorable way. The true master of propaganda, and the individual by whom everyone else is measured, is Nazi Minister of Propaganda and Enlightenment, Paul Joseph Goebbels. While the Nazis were politically right of center compared to the left of center Bolsheviks (later Communists), the methods they used were similar with the exception that they were refined to a sharp edge. Everything was stage managed, from the use of radio (they even distributed small radios to every family so they could listen to broadcasts), to sports and political events (the concept of political commercials, for instance, can be traced back to "The Triumph of the Will, which was filmed and directed by Leni Riefenstahl). They even politicized sports, starting with the 1936 Olympics, which was held in Berlin, with the film "Olympiad" , also directed and filmed by Leni Riefenstahl. According to Goebbels, propaganda had to simple , easily understandable, and plausible. To help him do this, all slogans, like with the Communists, needed to short and catchy phrase such as "One Germany, One Reich, One Leader". Pictures too needed to catch the eye (and memory), and so they made use of certain colors and images. Music was incorporated to convey a mood too. The message had to be subtle and believable. It had to be presented "as if" it was understood; where the viewer and listener would make the desired leap or connection in their own mind without have to be told. Name calling, as childish as it seems, is used to anger, humiliate, and dehumanize your opponent. Lastly, it always incorporated obvious truths, especially ones that could be easily verifiable, therefore making the propaganda portions virtually invisible to the populace. But Germany wasn't the only country to use propaganda. So did Great Britain and the United States, especially through the use of movies (Hollywood produced dozens of propaganda films during the war. Hollywood as well as radio and television networks continues to put out films with subtle political and social agendas). After the war, Japan produced a whole movie genre warning of the dangers of nuclear war and/or radiation (ever hear of "Godzilla" or "Mothra"? They were all about radiated animals). So, does any of this sound familiar? It should. It's where we got the concepts of "spin" and "alternative facts" today. We see examples of it every day thanks to the marketing and advertising industry, from commercials for products or services to the TV and print news programs and articles to politically oriented commercials. It's used in just about everyone social movement you can think of. It's even incorporated into many of TV shows we enjoy every night. I suppose you can think of it almost as the creation and maintenance of an alternative reality, and that brings us back to the beginning...the protests and the signs.

What we are witnessing are not random spur of the moment "pop up" protests. They are organized. Someone is underwriting them, and whoever that is, they have a specific political agenda; perhaps an attempt to either change immigration laws or more than likely, to simply make borders and national sovereignty obsolete. Therefore, they gloss over or blatantly ignore current realities, such as the signs reading something like "Equal Rights for Immigrants". As everyone knows, all immigrants have "equal rights" with all other citizens. They are subject to the same laws and the same benefits as everyone else. However, that's not their intent with this sign. The originator of the slogan is obviously attempting to blur the distinction between ordinary immigrants who came here legally and the illegal immigrant who didn't, and, therefore, are not entitled to the same protection and guarantees. When you read the sign, it's suppose to create a question in your mind and make you think everyone isn't being treated fairly. It's supposed to make you react emotionally (as does most propaganda) and want to side with their position.

How about " No Human is Illegal"? Again, the anticipated emotional response would be "hell no, we're free". But what they aren't saying is this isn't about some form of human slavery. It's about individuals who have and are acting in a criminal matter (i.e.: they broke federal immigration law and they are likely using taxpayer based services, again criminally since they aren't entitled to those services). Therefore, in mixing both a truth with a lie as Joseph Goebbels suggests, logic should tell you that, no, humans aren't illegal but their actions are sometimes. A sign which reads "Welcome Immigrants" isn't necessarily being directed to someone who has gone through the legal process for immigration, but may be aimed at those who "jumped ahead of the line" and came here illegally, thus hurting the chances of those trying to do it the right way.

Having a "Day Without Immigrants" is equally ridiculous since America is a nation of immigrants. If it was actually intended as written, all of us would have taken the day off! But, of course, it wasn't. Again, it's about confusing or blurring the terms "immigrant" and "illegal immigrant" and attempting to using them interchangeably the way some people do "socialism", "fascism", and "communism", which are separate and distinct terms for different forms of government. Calling someone "undocumented" seems to imply that they merely left their green card or passport in their other pants or purse back home. It's not. It means these are individuals who willingly and knowingly decide to break the law, however, by calling them "undocumented" simply sounds nicer; friendlier and takes the seriousness of their actions out of the equation. It's like calling a drug dealer a "unlicensed pharmacist " or saying that a bank robber was making an "unapproved withdrawal"; it downplays the crime. "Love Trumps Hate" makes a claim that their actions are just and right while trying to equate President Trump's with what's unjust and wrong. 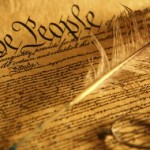 
Marxist Internet Archive: V.I Lenin "On the Slogan for a United States of Europe"