Ferguson Missouri: A Tragedy in the American Heartland

I'm not going to pretend I understand what's going on in Ferguson Missouri or that I've got a handle on what took place like the corporate media's talking heads are doing. Even the local authorities don't seem to have all the facts in yet, or if they do, they're keeping them close to their Kevlar vests. Before August 8th, all I knew about Ferguson Missouri was that it was the hometown of aviation great and WWII hero, Jimmie Doolittle. What apparently happened on August 8th, and I emphasize the word apparently, is that Officer Darren Wilson saw two black males walking down the middle of the street, stopped and told them to get on the sidewalk. Either one or both of the males smarted off to the officer and the exchange quickly became heated, and ultimately lead to a scuffle with one of the young men, Michael Brown, and the officer. At some point during the tussle, an attempt to take the officer's service weapon was made; the officer, however, was able to retain control of the weapon and fired several shots. After that point, events become confusing.

Brown may have turned to run before being shot or he may have backed off, was shot, turned to run then stopped and dropped to his knees with his hands raised and was shot (perhaps again). Or it have been some combination. There were apparently two witnesses whose stories don't quite jive. What wasn't, however, known, at the time by Officer Darren Wilson, is that Michael Brown and perhaps the other individual had just robbed a convenient store (which appears to be supported by surveillance video), however, it seems that others in the neighborhood not only knew about the robbery and who was involved, but what was actually stolen! What Brown didn't know was that the police officer who stopped him was unaware at the time of the robbery. Therefore, that may explain his actions, at least in part (however, it would have been a whole lot smarter to have played it cool and been exceedingly polite to the officer just in case he didn't know, but evidently Brown though it was better to act aggressively). Now, that's enough of the back story as I'm going to get into at this point because what I'm most interested in is what happened next.

From the day of the shooting, irrespective of any justification or not, until now, there has been looting, theft, vandalizing, and arson. Most of the residents (numbers vary, but evidentially several hundred) organized to immediately protest the shooting, which they have every right to do. However, it was the looting, the brazen theft of property, and arson that came next that I want to comment on. How does throwing Molotov cocktails and bottles and rocks at police officers show respect for Brown? How does overturning cars and trucks and setting them on fire provide any kind of dignity to Brown, his family, or to the community? What does the owners of these businesses have to do with the actions of Brown, or the police officer? Why are they now being turned into victims of this tragedy? 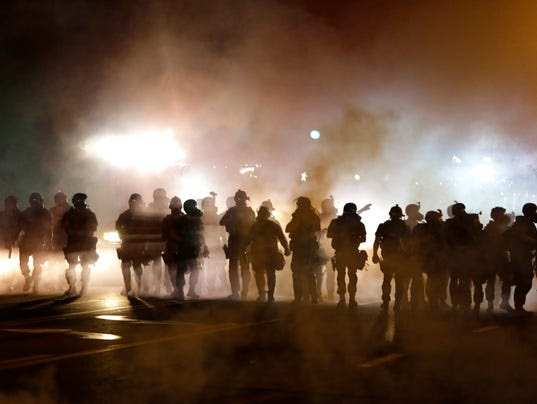 As we now know, Michael Brown wasn't the angelic choirboy that he was initially portrayed as; the "kid next door" headed off to college in the hopes of a better life. However, the violence shows nothing but total disrespect. It makes the community look like a bunch of thugs. If there was any serious intent on putting a positive spin on this, the looters and arsonists totally blew it.
On the other side, we have police officers---150 of them---who totally overreacted with their "Judge Dred" paramilitary tactics. There is no need for a police department to pretend they're the Marines storming some beachhead. Did they seriously have to dress up their officers in battle gear? To me, that would seem to be nothing more than an attempt to intimidate the crowd. Personally, I would have seen it as an open challenge, which the crowd did as well. And what's with the flash bang grenades and rubber bullets? Was it really necessary to roll out the armored personnel carriers complete with manned machine gunners on top? Did they actually think they were going to mow down dozens or even hundreds of demonstrators? This isn't 1968 and Ferguson Missouri isn't the Democrat National Convention in Chicago. All it did was escalate the situation. Seriously, we need to have a national discussion about the militarization the local police departments.

As for what should have been done after the first night's rioting, was to impose martial law and mandatory curfews with stringently enforcement until cooler heads had a chance to prevail. Mayor James Knowles and community leaders, along with the heads of the fire and police departments, should have met in private to discuss ending the violence and a peaceful way forward, and then made a joint public announcement. Protests still could be permitted during daytime hours, but anyone who came out at night should be presumed to be up to no good and dealt with accordingly.

I think that Missouri Governor Jay Nixon was justified in removing the local police from the situation and replacing them with the State Troopers. Clearly the local police had no clue as to how to handle the situation and there appears to be some sort of underlining pre-existing mistrust of the Ferguson Police. Perhaps the governor was thinking that a "kinder and gentler" approach would work better, especially when the head of the Missouri State Patrol, Captain Ron Johnson, is black and, therefore, might be in a better position to develop some sort of rapport with the mostly black demonstrators. But quite obviously that didn't happened and it doesn't appear likely too at this point. Once credibility and trust are lost, there's hard to recapture again regardless of the color of one's skin.

As for providing the name of the police officer involved, that too was badly handled by the local police. By withholding the name, it gave the appearance that the Ferguson Police Department was closing ranks in order to perpetrate some sort of cover-up, and in these type of situations, appearances are perceived realities in the absence of facts. A prompt open admission of what transpired and the name of the officer involved (along with a brief bio) would have created the appearance of transparency, although it may not have prevented those whose sole intent was to use the event as a cover for committing crimes, it would have helped defuse some of the anger.

The tragedy in Ferguson Missouri, which has a total population of just over 21,000, with blacks comprising 67.4% compared to whites, who make up 29.3%, isn't just the shooting and death of an unarmed young black man in one Southern town, regardless of whether or not he had taken part in a "strong-arm" robbery minutes before. The facts at this time indicate that Officer Wilson was unaware of the robbery or the two suspects, although Michael Brown didn't know this as his subsequent actions may have indicated. Yet, the community, or at least a segment of the community, already knew what had taken place and was neither surprised or outraged by the robbery as they were about the shooting. That makes perfect sense in that one involved theft of property and a physical assault of a store owner, and the other involved the loss of life. But also, what does this say about the public acceptance or even acquiescence of a crime? What does this whole situation say about the public's trust, or simple common respect of the police or it's elected officials? According to the 2000 Census, approximately 17.6% of the residents in Ferguson were living below the poverty line; of this, 23.2% were 18 and younger and 13.6% were 65 and older. While living in poverty does create frustration, does it ever justify violence or even disrespect for authority, and what part, if any, does poverty play in this?

Was Michael Brown trying to surrender when he was fatally shot? Was Officer Darren Wilson justified in shooting Brown? Perhaps. Perhaps not. Only a court of law will ultimate decide. Expressions of outrage through peaceful protests are certainly justified. But what is not justifiable is the vandalizing of cars; the destruction and burning of private property; the looting of stores which is nothing more than simple boldface theft of the type which led to Michael Brown's confrontation with Officer Wilson, and ultimately to his death. Is that the remembrance Michael Brown that the community of Ferguson is trying to covey to the world? I hope not.