A country is in some ways like a quilt or tapestry, reflecting the many faces of humanity with its mosaic of people, cultures, races, religions, and ethnic groups. A thing of true beauty. It is a reflection of all that has come before it, and what yet lies ahead. But like all quilts, or tapestries, it can only be held together by a common thread. That thread is language. This is especially true of a county like America, which as a nation, truly represents a microcosm of the world.

Here, we have every race, practically every language, culture, ethnic group, and religion that exists on this fragile blue-green orb of ours represented. Many of these people work, live, play and go about life’s little chores without so much as a thought, yet in their respective home countries, many of these same groups are at war with each other. In some case, they’ve spent centuries fighting and murdering each other. Such is the strength of America.

But this “co-existence” comes at price. It requires us to talk to each other. And that means learning and speaking English. While it’s a quark of fate that our Founding Fathers were of primarily English speaking Irish, Scots, and British stock, the fact remains that we became a country united by a common language. That commonality has held us together through the darkest days imaginable, and it has allowed us to celebrate our greatest triumphs. It allows us learn from each other, and well as teach each other about our cultures and beliefs. In doing so, it has created a sense of shared values, albeit broadly, and sense of what it means to be an American.

Today, we are faced with a crisis. For the first time in our nation’s history, we are dealing with massive explosion of people who not only do not know our language, but has little or no interest in learning it. Native born and naturalized citizens from all over the world, who have taken the time to learn the language of our nation, are finding themselves almost outsiders. There are many who seem to think we should accommodate these people by changing everything into their language. We are spending millions converting product information into Spanish, including taxpayer funded forms, applications and informational pieces. Businesses are now using automated phone systems requiring us to “press 1 for English” (there are even some US based businesses where English is the second choice).

To be fair, it should be pointed out that most of these immigrants come from countries were Spanish is the national language. Their governments don’t spend millions of dollars trying to accommodate those who don’t speak the language. You learn it or tough it out. You won’t find many bags of chips or cookies in both English and Spanish either. You won’t find businesses willing to give you an option of English or Spanish by pressing a button on a telephone. So, why do we?

It’s been said that every revolution contains within it its own seeds of destruction. Perhaps it is our diversity; our willingness to accept people regardless of where they come from or what they believe that will be our downfall. I hope not. Maybe it’s our generosity or our national sense of compassion that we try to make the transition into America a little easier than most nations. After all, we are a nation of immigrants. Again, I hope we as a people never lose these traits. But, I think it’s time that we ask of those coming to America (legally) that they learn the language. It doesn’t mean they have to forgo their own native tongue, or their culture. It does mean that to live here, you have to be able to communicate. Otherwise, how do you speak to the car mechanic (or tow truck driver)? The grocer? Government agencies or those elected to represent you? What do you do in the case of emergencies? How you tell the police, EMS, or fire department what’s wrong? How can they speak to you?

Let’s talk education for just a moment. Public schools aren’t just a place where you send your children to learn reading, writing, history, math, spelling, and the arts (and it certainly isn’t a place for teachers to “baby sit” either). Schools are also a place where children from all walks of life come together and learn to needed social skills. It’s where interactive skills are acquired, and the most basic building block of this is language. Yet, we spend hundreds of thousands of dollars hiring special education teachers and translators for kids, some of whom are children of parents here illegally, teaching them in other than English. In some cases, because the parents don’t want their children learning English! I can’t imagine any parent wanting to limit their child’s potential that way, but there you have it.

To that I say it’s a waste of precious resources to hire teachers or translators for children to continue their education in a language other than English. To hire facilitators to teach them English so they can participate with everyone else would be a better use of tax dollars. Secondly, only those who parents are here legally should be entitled to a public education. If we, the taxpayers, are paying for their education, we have the right and responsibility to at least insist they’re here legally (and one presumes that with that, their parents are contributing through their tax dollars as well). On the point of jobs, let me say that those who don’t speak the language also run the risk of abuse by employers when it comes to their pay, benefits, hours, etc. Of course, sadly those here illegally have little resource to these abuses. 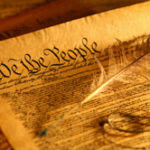 It’s time that America adopts English as it national language. Our representatives in Washington need to make this happen now. It’s also time we demand that our Governors, State Senators and State Representatives adopt a resolution making English the official state language of whatever state we happen to live. It’s time to tell manufacturers that English only on a can of peas or beans will do just fine thank you. And finally, the next time you have to “press 1 for English”, tell that company’s representative that we speak English here. Let someone else “press 1”.
Posted by Paul Hosse at 6/14/2006 08:05:00 PM