What Happened to the Republican "Red Wave"? The 2022 midterm elections are over. But the "red wave"  promised by Republicans and threatened by Democrats and the Left media never materialized. In fact, the "red wave" turned into more of a spritz. It's not because of a low turnout. Tuesday's voter turnout was heavy practically everywhere.

At least 94 million votes were cast on Tuesday. That number will likely climb higher as more late votes are tallied in the remaining close races. Lines were wrapped around buildings and parking lots, with average wait time to vote in some places was an hour. Tuesday's elections were in truth what every election turnout should be.

Many of the anticipated GOP wins never happened. Many of the Democrat loses fail to materialize despite President Biden's and Congress's pitiful approval ratings. For whatever the reason, voters in general didn't punish the Democrats for  the faltering economy,  out of control crime, the stock market losses, rising inflation and the resulting higher prices at the pump and grocery.

In the House of Representatives (often simply referred to as the "Congress"), Republicans gained three new seats while Democrats lost six. But, as with the Senate, neither corporate owned party was able to seize a majority. Democrats have 176 seats compared to 204 by the GOP.  It takes 218 for a majority.

When it came to gubernatorial elections, Democrats picked up two seats, bringing their total to 22. Republicans lost two seats, leaving them with 24 (there was no elections for governor in the remaining states).

The media did everything it could to blame former president, Donald Trump, rightly or wrongly, but mostly wrongly. They even used the specter of a possible second run by Trump should the GOP take control of either the House or Senate.  The media played up the defeat of every pro-Trump Republican or "election denier" candidate, as if that should have some bearing on the economy, crime, or foreign policy.

It's worth mentioning too that virtually all of the incumbents seeking reelection were successful, which shouldn't come to anyone's surprise. The U.S. has a incumbent retention rate of around 98%, which is higher than the old Soviet Russian Politburo or the Chinese Communist Party.

I think that says more about us than it does about Russia or China. With all that is blatantly and critically wrong with the United States, the majority of us went to the polls and asked for more of the same. It's as if we've become a nation of political sadomasochist. There's an old saying (often misattributed to Albert Einstein) which says the definition of insanity is doing the same thing over and over again and expecting different results.

The results of Tuesday's election makes me wonder if the American People are collectively insane or have we simply stopped caring about kind of society we live in?  We keep electing Democrats or Republicans (as if they're our only two choices) and expecting different results. We complain about the results and then claim that we were only picking the "lesser of two evils" as if that's somehow better or justifies their choices. Evil was still chosen.

It sort of reminds me of that New Year's Eve "morning after" regret when we wake up after a night of partying hard and see who---or "what"---we brought home with us. That's where Americans are today or at least will be over the next few months when they're staring at gas pump prices or grocery bill.
Maybe they're "morning after" choices will hit them when they're reading their latest tax bill or listening to the news talk about the latest murders or carjackings which keeps getting closer and closer to where they live. Perhaps then they'll take a moment to reflect on their choices when they voted or decided to skip the voting booth all together. Most will simply ignore their own personal responsibility and blame it all on whoever the media tells them is at fault.

Neither of party represents us. At some level we all know it, and yet we keep repeating the same mistakes like some "Pavlov dog" trained to bark or drool at some preconditioned sound. It's the type of mentality one reads about in dystopian novels like Orwell's "1984". We also see it in countries with a long history of repressive authoritarian governments (it's also common behavior in abusive relationships).

There's something we need to consider as will. Under our present "winner-take-all" system, those whose candidate or party lost, will spend the next two, four, or six years without being represented. That means having no say on issues and taxes. Those who claim that if elected they'll represent everyone in their district are either lying or de facto betraying their party, their principals, and their supporters.

Many of the Founding Fathers opposed political parties, in part because they thought they'd become special interest cliques which would eventually strip citizens of their political power and individual sovereignty. Today, the two political parties are literally owned by corporate interests. We exist as a "Republic" in name only, much as did Rome after the rise of the Caesars. 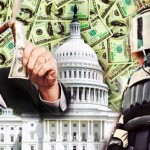 We've replaced the royal decrees our Founding Fathers opposed with corporate driven legislation, written by lobbyists in the pay of corporations. Taxes, rate and fee increases are imposed on us without our consent no matter who we voted for. "Taxation without representation" is the defacto rule. Not the exception. Instead of lucrative careers in the service of a king, they earn far greater wealth in the service of Wall Street.

There are things we can do. First, we need to stop voting for the status quo. There are usually more than just two choices, and those with a "D" or "R" behind their name aren't necessarily the best choices. Not the Independent or third party candidates.  We need to demand changes in legislation such as term limits, ending partisan gerrymandering, overturning Citizens United which allows near unlimited donations to politicians and political parties by corporations.

Citizens United erroneously equates "free speech" with money except we're capped in what we can give while corporations aren't. It also declares personhood on corporations, which are in fact fictious legal entities. Citizens United has all but eliminated ordinary citizens from the political process by making it too expensive to run for office.

Every state should permit citizen initiatives or voter referendums. Right now, about half of all states "allow" its citizens to place an issue on the ballot. Other states require a petition be submitted to the legislature for consideration.  Aren't we as citizens suppose to be the boss? So, since when do "employees", elected or otherwise, dictate the rules?

Along the same line, certain non-legislative offices shouldn't be partisan to begin with. For instance, why should the County Clerk's office be partisan? They just follow and enforce existing laws pertaining to vehicle or boat registration, drivers licenses, voter registration, and so forth. Same goes with a county sheriff or constable, a property tax administrator, County Attorney, or the Circuit Court Clerk's office.

Why should a Secretary of State's office be partisan?  Same goes for State Treasurer, Comptroller, State Auditor, State Attorney General, and the rest of a state's Constitutional offices.  They make no laws, They establish no policy. They simply enforce what the legislature has passed and the Governor has signed into law.  These are all offices which should be politically unbiased anyway.

Another great option is Rank Choice Voting (RCV). It puts all the candidates on ballot without any partisan indicators (via a random draw of names). You, the voter, rank them (one, two, three, etc) according to your preference. The top ranked candidate wins. No need for primaries.

Another way is to use RCV to create a run off of the top three candidates. A second election is held and the top ranked candidate wins! Rank Choice Voting is now used by over 11 million voters in over 50 cities, one county, and two states. It works and it's fair.

Speaking of primaries, taxpayers need to stop picking up the tab of partisan primaries. Oh, you didn't know? Yelp, your hard earned tax dollars pay the cost of the primaries for the two rich corporate owned political parties. It's their primary, so they should pay for it. Otherwise, third party members and Independents should be allowed to vote in the primary of their choice. After all, it's their tax dollars too!

If we're to restore our Republic, we're going to have to take action together. The above is just a few things we can do together. The nation's ruling oligarchy which has replaced our Republic with neo-fascist Corporatocracy. They need us divided, frustrated, and confused. It's the only way we can be controlled and manipulated. Together, we can bring back our democracy instead of giving lip service to it. Divided, we continue down the slippery slope into the abyss of a totalitarianism of which there is no return.

Why Are Sitting Members of Congress Almost Always Reelected?